If an edge is going to occur, the situation will most likely occur late in the shoe. The strength of the opportunities will be proportional to the number of unseen cards.  In this study, I investigated situations where the number of unseen cards varied from 18 to 50 at the time of the wager. Beyond 50 cards, there were effectively no instances of a player edge over the house on either the Player or Banker wager. Likewise, most casinos use dealing procedures that do not afford players an opportunity to make a wager with fewer than 18 unseen cards left in the shoe.

Here is a summary of how I proceeded:

After repeating steps 2 through 6 for one hundred thousand (100,000) baccarat shoes, I imported the information into Excel. I then plotted the distribution of the house edge for both the Player and Banker bets.  I did this for 18, 26, 34, 42 and 50 unseen cards, so altogether I ran five huge simulations.

It is worthwhile to look at one distribution in detail to get some intuition for the information I obtained. For example, here is the distribution for 18 unseen cards: 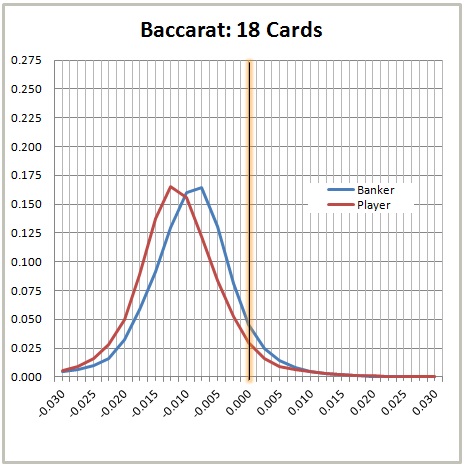 There are two geometric features about these curves I want to point out. These correspond to the "average edge" when the Banker/Player bet is favorable and the frequency of the opportunity to make an advantageous Banker/Player bet. These are the two numbers that allow the total potential income to be computed.

In summary, with 18 unseen cards:

The following tables summarize the pertinent data for the distributions above:

After each round is dealt from the shoe, the player will have an opportunity to make his next baccarat wager with 4-to-6 fewer unseen cards than the previous round. Using the data above, I was able to plot the total possible units that could be won per shoe using computer perfect play, based on the number of unseen cards at the start of the final round of the shoe. The following chart gives this information: 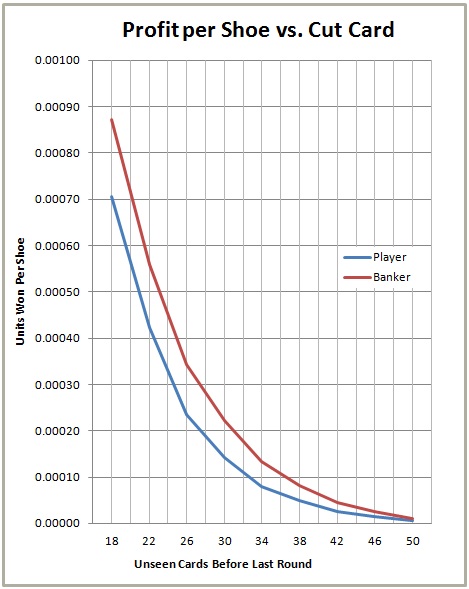 In particular, with the final round occurring with 18 unseen cards and with computer perfect play:

Maybe he’s the world’s most perfect card counter. Or perhaps he is using a computer. Or maybe he is just psychic. It doesn’t matter. Just assume this player somehow knows exactly when he has the edge over the house and whenever he does, he bets $1000. The practical limitations on the earning potential for this player are profound -- $1.58 per shoe for a wager size of $1000.

In other words, baccarat cannot realistically be beaten by computer perfect play.  Occam's razor then dictates that a suspected advantage player is either lucky, using a stronger method (card sorts, ribbon spread, etc.), or is a crook.