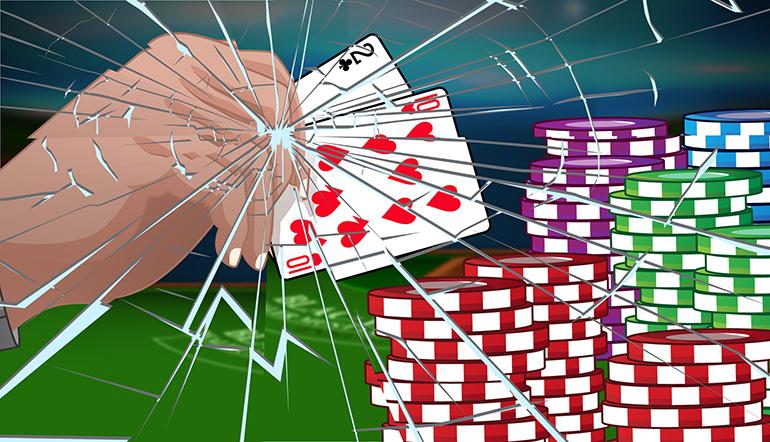 One of the most fundamental concepts of playing casino games to an advantage is the Gambler’s Ruin theory. In its simplest form the Gambler’s Ruin theory deals with how much of a bankroll does and advantage player need, and at what level a players need to size their bets at. It is a necessity for any serious advantage player to master to maximize their win rate while minimizing their risk. At some point during your play, most likely during a prolonged losing streak, you’ll be tempted to over bet your advantage. Doing so can lead to ruinous results. It’s likely the remainder of this article will save you from depleting your bankroll. So let’s get started.

Playing any gambling game to a positive advantage, and specifically the game of 21, leads to what mathematicians call a random walk with an upward drift. What this means is that you will go through a series of losing streaks and a series of winning streaks as the number of hands increases, but the overall trend is a positive upward slope.

The term random walk is an analogy used by mathematicians where you equate the desired result, the EV as the number of events (hands) gets larger and larger, will be realized. The analogy is equated to a drunken individual walking out of a pub and staggering towards the bus stop. He will eventually get their but the path will be twisted one filled with all sorts of bends and slants. The path is not the most direct one.

The take away here is that gambling, even with an advantage involves risk and the player needs to take appropriate precautions to ensure that they don’t bust out. The precautions involve having enough of a bank roll to outlast any negative swings that may occur. Think of it this way. If I paid you two dollars for every heads that came up on a coin flip and you paid me one dollar for every tails that comes up it would be a good bet for you. But you should have more than 5 dollars to wager because you could very easily hit a string of tails that could wipe you out. You have to have enough money to outlast the series of tails that comes up.

Another consideration is the financial strength of the player. If you have a solid six figure income you can then you afford to not be over conservative with your bankroll. This also influences the overall psychological factors that come into play. As stated earlier there is a tremendous psychological component to advantage gaming. A mental toughness is required to struggle through the negative swings and see it through till the positive expectation is realized.

The Gambler’s Ruin Theory is a key concept to make sure that people do not go bankrupt from playing. It is the way that we find the proper tension between risk and return. If we are too aggressive we increase our chances of going bankrupt, when we are too conservative we leave money on the table and are not maximizing are earning potential. Every player at one time or another will endure a losing streak and want to deviate from the defined strategy in an attempt to get the money back quickly. But it’s important that we let the math do its thing and let the money come to you. Don’t force it, it will come; patience in this case is a virtue.

Blackjack Tips
Bankroll Tips
About the Author
By
Nicholas Colon