Back in 1997, during one of my early outings as a blackjack card counter, I saw my first automatic shuffling machine. This one had metal arms that attempted to duplicate the physical act of shuffling like a human might do. As you may expect, the thing was awful at its job. Clumps of cards fell through the process virtually untouched. It was clumsy, sloppy and noisy. If I had any sense at the time, I would have pummeled the thing. Instead, as a young card counter, I dutifully spread my bets with the count, while being completely oblivious to the outrageously high edge I could have obtained.

The history of automatic shufflers has been the history of APs finding ways to beat them. As I show in this post and this post, issues with shufflers persist. Mostly, the issues have to do with the mechanics of how the dealer grabs the cards from the shuffler, or how the shuffler is placed on the table. These ergonomic factors help create hole-carding opportunities. Other issues with automatic shufflers have come to light over the years, some of which have allowed APs to beat these machines outright.

On the other hand, APs have theorized some shufflers may actually bias a game against hole-carding, while leaving the overall game fair for the non-advantage-player. In particular, after years of APs being bashed on the rocks of Three Card Poker hole-carding, all sorts of conspiracy theories about the shufflers were put forward. At least one of these conspiracy theories appears well-founded in the engineering of the most popular shuffler used to deal Three Card Poker, the Ace shuffler.

The problem with shuffling perfection is the engineering problem of performing a true shuffle on a physical deck of cards in a short period of time. In the case of shufflers that deal packets of cards (e.g. for Three Card Poker), it is sufficient to just insure the packets individually are random, while the specific order of the cards that go into these packets may not be. This engineering shortcut is apparently what was used in the Ace shuffler. 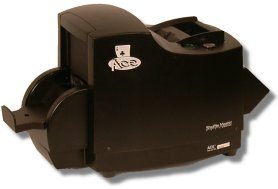 From what I understand, this shuffler has a vertical rack consisting of individual trays. After the spent deck of cards is placed into the cradle, the shuffler goes through the deck one card at a time, starting with the top card and moving to the bottom card. For each card, the machine picks a random tray position in the rack. The rack then moves so that the selected tray can receive the next card from the top of the deck. This continues, with each card being dealt into a tray. When a particular tray comes up again, the current card is placed on top of any previous cards already dealt to that tray.

The physical design of the Ace shuffler has been used to attempt to answer the question of why APs can’t make any money by hole-carding Three Card Poker. The theory is that this specific design actually creates packets of three cards that favor a low card (2-through-Jack) in the hole-card position and high cards in the non-hole-card position. When the AP makes his Play bet, after seeing a low card for the dealer’s hole-card, he is surprised by how often the dealer seems to qualify with buried high cards.

Here is the logic behind this theory:

Here is a picture of the cards in the discard tray at the end of the round: 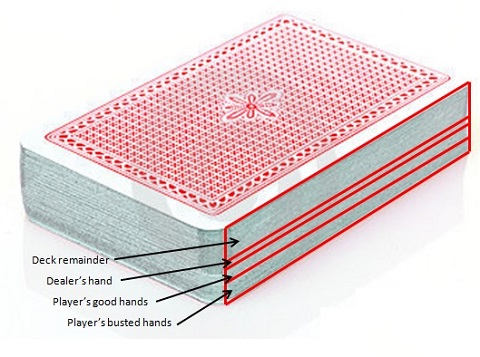 Now, here’s where the shuffler design comes into play. The shuffler is dealing from the top of the deck on down. The first cards to be dealt into the trays will be the top cards from the deck. But these cards are most likely to come from the Player’s busted hands. That is, the first cards to go into the trays will be non-qualifying (2-to-Jack) cards. The remainder of the deck in the cradle must be rich in qualifying cards (Queen, King, Ace), so the second and third cards dealt are more likely to be qualifying cards.

The shuffler has arranged the three-card packets so that low cards are biased towards the hole-card position of the packet and high cards are biased towards the second and third positions. While the individual hands are random, to the hole-carding AP, this has the potential to be a death-blow. Surely this must be the reason that APs have so often failed to beat Three Card Poker by hole-carding.

My personal opinion is that this theory doesn’t hold water. Here are a few reasons:

My opinion is that there is enough that can go wrong for the AP when hole-carding Three Card Poker that he doesn't need shuffler bias to lose his bankroll. As I show in this post, just a couple of issues per day will move the AP in to negative territory. My personal experience was certainly consistent with the reality of hole-card reading errors, poor game choice, playing through breaks, and cover bets. These elements can easily move the game into the house’s favor. Looking for answers in shuffler bias is a last resort for the failed AP.

In practice, there is no such thing as a perfect shuffle or a perfect shuffler. APs are constantly scouring patents and disassembling these machines looking for an edge. Sometimes these edges use features of the shuffler that no one could imagine could be used against them. But when APs lose over the long run on a game where they have an edge, they are not immune to their own peculiar breed of conspiracy theories. In my opinion, the case made for a shuffler bias against hole-carding in Three Card Poker is an illusion and an excuse.