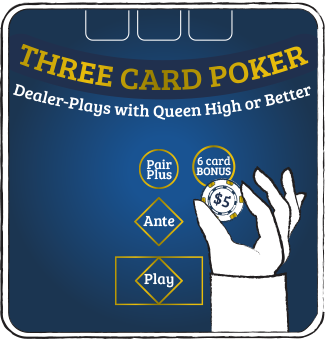 Side bets and main game variations have become an important part of table games in live casinos and online casinos alike. They’re a way to add a little excitement to the basic game with a chance at bigger jackpots.

Three Card Poker has several side bets available. They are not mandatory; you may play the main game with or without making the side bets. There also are game variations in which betting patterns and payoffs are different than in basic three Card Poker.

In this chapter, you’ll learn about the following Three Card Poker side bets:

Players who want a shot at bigger jackpots than you can find on standard Pair Plus can find an opportunity on the Six-Card Bonus bet.

Like Pair Plus, it pays according to a pay table, and you do not have to beat the dealer. That’s made possible by combining the player’s three cards with the dealer’s three cards and comparing the best five-card poker hand to the pay table.

A five-card royal occurs in six cards an average of once per 1,131,028 hands. Compare that to the once per 5,525 hands for a mini-royal in three cards and you’ll see why casinos can pay bigger jackpots on the Six-Card Bonus than on Pair Plus.

Note that in this bonus bet, straights occur more frequently than flushes, the opposite of the situation with three-card hands. Therefore, flushes bring bigger payoffs than straights. The house edge depends on the pay table.

Here are a few available pay tables and their house edges

The lowest house edge comes with the highest payoffs on three of a kind. It occurs more often than other hands, so players collect that higher payoff frequently.

The main game is the same as on regular Three Card Poker tables. You can play Pair Plus, ante-play or both.

Players also have the option of making a $1 side bet on progressive jackpot.

A portion of each wager is added to the jackpot.

Payoffs are made according to a pay table that has a flush as the lowest-ranking winning hand, with other payouts on straight flushes and mini-royals.

In addition, there is an envy bonus. Whenever one player wins big with a mini-royal, other players collect a smaller reward. 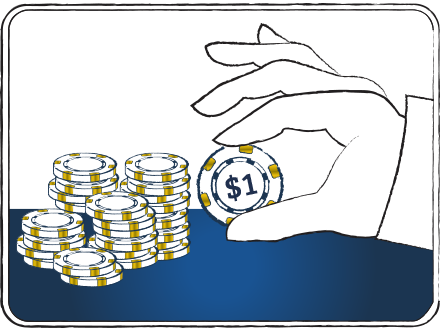 Here is the pay table:

That makes for a very social game, where players are rooting for each other to get the big hands.

As with other side bets, this is optional. You can play Pair Plus or ante-play without making the Prime bet.

Winning hands do not have to be all in the same suit. Any mix of hearts and diamonds are all red, and any mix of spades and clubs are all black.

Payoffs are according to this pay table:

You will have a winner on Prime about 23.5 percent of the time, and the house edge is about 3.6 percent.

Instead of a side bet, Ultimate Three Card Poker is a game variation in which the play bet can be three times the ante instead of equal to the ante.

There are both ante-play and Pair Plus options. Pair Plus is the same as in standard Three Card Poker.

There are several differences in ante-play. 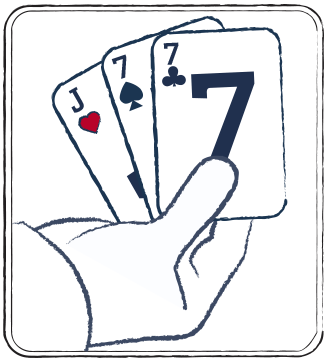 After all decisions are made, the ante and play bets are decided as in standard Three Card Poker.

If the dealer does not have a Queen or better, he does not play. Antes are paid at even money and play bets push.

If the dealer has a Queen or better, players must beat the dealer to win, and winners are paid even money on both ante and play bet.

If the player wins the poker hand, the blind bet is paid according to this pay table:

That’s because of the effect of the blind bet. You bet more hands than in standard Three Card Poker largely in order to keep from forfeiting the blind bet.

Make the maximum play bet of three times the ante with any pair or better. Bet an equal amount to the ante with Jack-7-4 or better, and fold with lesser hands.

It is never to your advantage to bet just twice the ante. Either make your bet equal the ante, or, if you have pair or better, make the maximum bet of three times the ante. 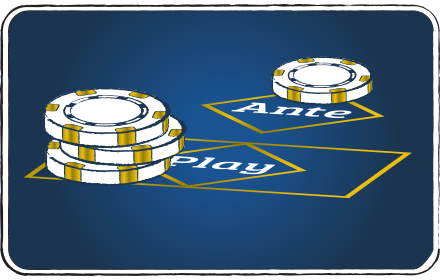 That leads to a house edge of 5.4 percent of your ante or 1.7 percent of total action.