It’s one thing to play blackjack at an advantage. It’s quite another to indulge in the game when sitting alongside James Grosjean.

A Harvard graduate with a specialty in applied math, adeptness at computer programming and the kind of astute mind that makes him into every casino’s worst nightmare, Grosjean ranks among the world’s most successful gamblers and a living blackjack legend. He always plays with a considerable advantage, laughs at card counters who are thrilled by garnering measly two-percent edges: “They are the equivalent of salamanders and I am a fully formed human”, he once told me, getting evolutionary and a little cocky – and thrills at the act of reverse engineering seemingly unbeatable casino offerings. Employing proprietary software, he writes computer programs that play the games and aid him in figuring out how to beat them. Ultimately, Grosjean crushes gambling dens in ways that few others imagine to be possible.

For all of that, though, his bread-and-butter gambits typically involve advanced forms of hole-carding. That is, finding weak dealers who are accidentally exposing corners of their hole cards. He snags his peeks through a combination of excellent eyesight and crafty social engineering. Then he makes the most of his exploitations by understanding what to do with the gleaned information (often partial, as he is not always afforded full views of cards).

Unlike card-counting, which is easily recognized, says Grosjean, “Hole-carding is difficult for casino personnel to police. For that reason they tend to be reactive”, rather than actively looking for people who may be doing it, “and there are plenty of times in which I am spotting the dealer’s cards and the casino has no clue as to what is going on. That’s allowed my team and I to win $225,000 in a single night, spending hours playing blackjack. Some games out there have been worth $100,000 per hour to us.”

On a Sunday afternoon in Atlantic City, I have an opportunity to watch the slender, forty-something, understated Grosjean in action. He’s about to exploit a dealer that he characterizes as a “superstar,” meaning that the guy is particularly terrible at handling cards and unwittingly exposes them. Sitting at third-base, the seat closest to the dealer’s right hand, Grosjean spots every hole card and announces it to the table – so long as you are familiar with the verbal code he uses. Incorporating words like Egg (to denote the dealer having an 8), Top (ace) and Girlfriend (queen) into a rambling monologue, Grosjean communicates down-card information to partners who bet close to table maximum (and leave with five-figure scores) while Grosjean gingerly puts up $5 per hand and looks like the consummate low-roller.

His eagle-eyes turn blackjack into an easily beatable game, but he’s far from limited to just one avenue for profiting from casinos. Grosjean has hastened the deaths some games (including off-beat gambles such as Bacalette, a card game that felt a bit like roulette) and capitalized on others intensely.  He most enjoys destroying so-called carnival games, which are designed to be total sucker bets. These would include Ultimate Texas Hold’em, Mississippi Stud and paigow poker. Not long ago, I watched him and his crew decimate a cards-based craps game (in a jurisdiction where dice are illegal for casino-play and cards stand-in for the six sides of each die) so subtly that casino managers never knew quite what happened or who did it. But they still revamped the dealing procedure in order to thwart whatever was going on. Grosjean expresses confidence about outsmarting the recently installed fix. 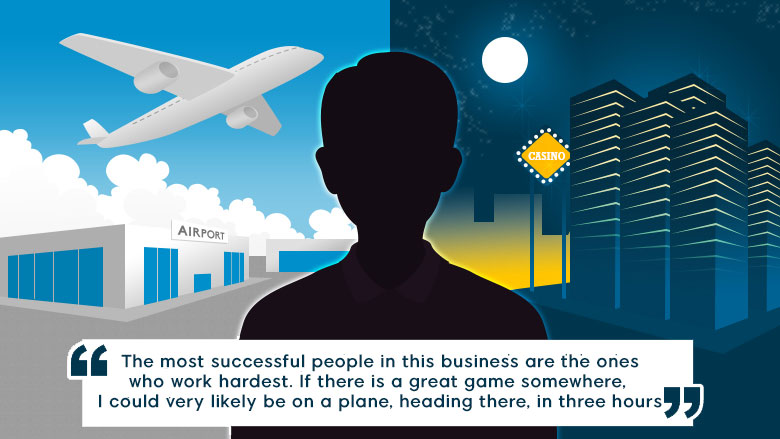 “Casinos feel that anyone who plays carnival games is an idiot,” Grosjean tells me, making it clear that this works in his favor. “Those games have high house-edges, people rarely win big on them; and when they do win big, they dump the money right back. Casinos did not take those games seriously” – until Grosjean began using math and computer programming to divine strategies and turn seeming sucker-bets into his personal ATMs. “If you see all the hole-cards at 3 Card Poker, you are playing at a 30-percent advantage. If you see all four hole cards at Caribbean Stud, your edge is more than 60-percent. There was a game called Match The Dealer. I ran the numbers on that one and realized that I could play it at a 150-percent advantage – but it disappeared before I had the opportunity.”

While most of us consider casinos to be high-risk places where you’re more likely to enjoy action than profits, Grosjean does not ante up in search of thrills. “There may be a way to beat any game in the house”, he says, leaving the impression that the word any could easily be replaced with every. “It may require a dealer screw up, but you need to know the strategy to deploy and how to get the money. Many shuffling machines have vulnerabilities. If you can bet $10,000 on that vulnerability – even if doesn’t happen every time – profitability looks pretty good. If you have a huge bankroll, a mini-baccarat play that takes place once per shoe is pretty good. You have a 9 percent edge there; so if you bet $20,000 a hand, you make $1,800 per shoe. That’s not bad.”

Grosjean began his hole-carding career while attending grad-school in Chicago. Initially, as a struggling student with mounting debt, he made extra cash by card-counting blackjack games on river-boat casinos there. Then, one night, he spotted a dealer who was accidentally revealing her hole cards. He recognized this as a much better advantage-playing technique than simple card-counting, devised mathematically sound techniques for winning when he has partial information on a card’s denomination and, before long, forsook a desired career on Wall Street for one in casinos.

The move proved to be a smart one. Grosjean makes loads of money, loves his work, has no boss and just the right amount of notoriety – including a book called “Beyond Counting” and an online column, of the same name – yet recent photographs of him are scant and he plays in a style that draws little heat until he’s already enjoy a sizable windfall. Nevertheless, it would be erroneous to believe that he does not work hard for what he has achieved. “People have the mistaken impression that living this life means you are on permanent vacation,” says Grosjean. “But in some sense it is the opposite.”

He emphasizes that most casinos remain open 24/7 and that opportunities can be fleeting. “I’m never off!” he continues, explaining that he’s either on the road – playing and scouting games – or else occupying himself by doing analysis on potential opportunities. “The most successful people in this business are the ones who work hardest. If someone called me now and said there is a great game somewhere, I could very likely be on a plane, heading there, in three hours. If there is a good game on at 5:00 in the morning, you better get there. The best games may not conform to your schedule, they may not be in places where you want to go and you may need to make sacrifices. I make those sacrifices and am always on call”.

Considering it all and sounding perfectly content with the way in which things have shaken out, Grosjean happily concludes, “There is a degree to which I am a slave to the game.”

James Grosjean
About the Author
By
Michael Kaplan