Edward Thorp - The Man Who Beat The Casino 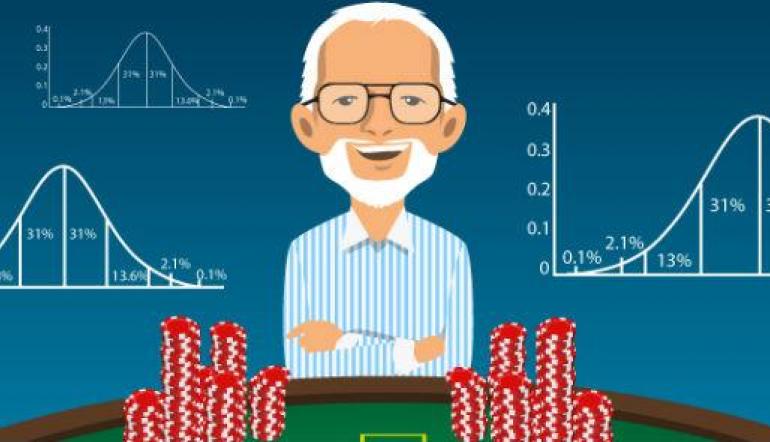 Next time you find yourself at a live blackjack table, adding and subtracting ones as you count your way through a shoe of cards, and, hopefully make a bit of money in the process, take a moment between hands to thank Edward O. Thorp. He is the university math professor turned stock-market genius who invented card counting, wrote a bestselling book called “Beat The Dealer” and can be considered the father of modern advantage play.

Four years before the 1962 publication of Thorp’s book, he was contemplating ways of beating roulette and had already created the world’s first basic-strategy card – those pocket-sized laminated rectangles that tell players each correct play to make in blackjack. As related in his new book, “A Man For All Markets,” in 1958 Thorp and his wife decided to spend their Christmas holiday in Las Vegas, playing a bit of blackjack.

At the time, blackjack was a pursuit in which players had no shot at winning money over the long run. In fact, they were likely to lose lots of cash as a result of random, shoot-from-the-hip play. Enmeshed in the world of games and math, though, Thorp had been made privy to an approach for playing blackjack – which later became known as “basic strategy” – that had been devised by four men in the US armed forces. It reduced the house edge to .62-percent.

Thorp sat down with a bankroll of $10 and his homemade card that told him what to do with all possible hands against every dealer up-card. He had $8.50 left before quitting – and becoming optimistic about conquering the game by learning in his own way how to play it. Dealers and fellow players laughed at him for consulting his card and making plays – hitting with a soft 18 against the dealer’s 9, for example – that seemed silly then but is the norm now. “The atmosphere of ignorance and superstition surrounding the blackjack table that night had convinced me that even good players didn’t understand the mathematics underlying the game,” he writes in his book. “I returned home intending to find a way to win”.

In the library of UCLA, where he toiled in the math department, Thorp worked numbers and reached the breakthrough conclusion that the game of blackjack changes based on cards remaining to be dealt. In 1959, Thorp snagged a professorship at Massachusetts Institute of Technology. After learning to program  on the school’s mainframe computer, he created a system for keeping track of cards that had already been dealt, betting higher when the remaining cards presented advantages for players, betting lower otherwise and deviating from basic strategy when the math deemed that such a move would be correct.

In short, he came up with the system that card counters still use today. By 1961, after Thorp went public with his findings, he teamed up with a pair of New York businessmen who were eager to back a test-run in Reno, NV. They put up a total of $10,000 (equal to 80,000 in 2016 dollars). In short order, Thorp was spreading from $50 to $500 in a single-deck game that was dealt to the bottom. Uncomfortable with his winning ways, casino owners demanded that their dealers shuffle as often as necessary to prevent the mathematician from consistently winning. Clearly, Thorp’s  system worked.

After a few days, though, he experienced the bane of every card counter who’d go on to follow him. “The casino had barred us from play,” he writes. “I asked the floor manager what this was all about. He explained, in a friendly and courteous manner, that they had seen me playing the day before and were puzzled at my steady winning at a rate that was large for my bet sizes. He said that they decided that a system was involved.”

They were right. In the end, it yielded $11,000 of profit via just 30 hours of play (this would be today’s equivalent of an $88,000 profit, nearly $3,000 per hour). By the summer of 1961, Thorp was writing “Beat The Dealer,” a book that would introduce the world to his breakthrough strategy for playing blackjack with a mathematical edge that turned the tables on the casinos. The book became a bestseller. Legions of blackjack fanatics followed its concepts and earned fortunes.

But the casinos did not take well to losing and Thorp, who began teaching at University of New Mexico, took to wearing disguises in order to thwart eagle-eyed pit-bosses and security personnel. He and his book got written up in Sports Illustrated and Life magazine. Bookstore owners couldn’t keep it on their shelves. Freaked-out casino magnates held a secret meeting at the Desert Inn to try figuring out what to do about Thorp and those who had been inspired by him. Sin City’s local newspaper, The Las Vegas Sun, retaliated with a story attempting to debunk card counting.

Obviously, the reporter was wrong. In the wake of Thorp’s book, blackjack teams – like the famous MIT Team, immortalized in the movie “21” – formed and flourished. Advanced gambits, such as the Big Player strategy (in which someone slips onto the table, betting only when the count is positive), made profits soar and left maneuvers difficult to detect. As Thorp writes, “I found myself barred, cheated, betrayed by a representative of the gaming control board and generally persona non grata at the tables. I felt satisfaction and vindication when the great beast panicked. It felt good to know that, just by sitting in a room and using pure math, I could change the world around me".

By 1964, as advantage play spiked, Thorp forsook blackjack for a bigger challenge: the casino known as Wall Street. Having recognized that “gambling is investing simplified,” he went on to beat that larger, more challenging game, reaping sums of money that capitalize on inefficiencies and make advantage-playing profits look like chump change. Clearly, as he has proven via successful runs against blackjack and the stock market, “Great investors are often good at both”.

Edward Thorp
About the Author
By
Ketty Fisher