The Cause of Suffering is Desire

The title of this post is one of Buddha's "Four Noble Truths." We all suffer. But leave it to APs to actually quantify desire.

Back in the days when I haunted bj21.com (Stanford Wong’s blackjack website), members often discussed the quality of various blackjack games on the “Green Chip” message boards. One of the numbers that was frequently thrown around  was Donald Schlesinger’s “desirability index” (DI). Roughly, games with a DI of about 6 or higher were considered to be decent for ordinary blackjack card counting. It was very rare to find a card counting opportunity with a DI greater than 12. Moreover, those games were usually accompanied by cautions that they were being watched very carefully.  We endlessly dissected nuanced improvements, things like the “cut card effect” and the “illustrious 18.” Then out of the blue, an advanced advantage player would join one of our discussions, telling us that he was getting DI’s of 50 and higher. Of course, there was disbelief and mockery. We all knew such a number was surely impossible. We quickly concluded that the poster was an imposter and a troll. Many threads degraded into name calling, threats and intimidation as Godwin’s Law reared its ugly head.

Now I find myself on the other side of this equation. I work in an industry that is obsessed with blackjack card counting and I am the bully making posts. Few on the floor understand that opportunities of this magnitude might exist; that games can be beaten this badly.  But DI’s can reach astronomical heights. In this post, I showed that there are several blackjack side bets with DI’s above 20. In this post, I showed that the Natural 8/9 side bet in baccarat has a DI above 20. But to climb even higher, to enter the stratosphere of DI's, the AP must take the next step and move beyond counting, on to hole-card play, edge sorting and other advanced methods.

Before continuing, I am going to take a time out to review the definition of DI and to introduce a new number, N_0. Here is Donald Schlesinger’s definition of DI from his book Blackjack Attack, 3rd edition (page 186). He defines DI,

“…for the play all game, to be equal to one thousand times (for convenience of expression) the ratio of that game’s per-hand win rate to the per-hand standard deviation.”

Let EV denote the expected value per hand. This is simply the edge the AP has over the house. Let SD denote the standard deviation for one hand. The value of SD gives a measure of the volatility of the game. Then, for a game where the AP is playing every hand, the value of DI is given by:

The new statistic I’m going to be presenting in this post, N_0, is given by this equation:

The reader no doubt wonders what this number means and where it comes from. The glossary at bj21.com gives the following definition of N_0 for blackjack:

"The number of hands (sometimes expressed in hours of playing time) theoretically required to be played with a certain set of rules and strategy (count, spread etc) before the player reaches his goal to be ahead by at least one standard deviation."

In other words, N_0 is the number of hands the AP has to play until the chances he is still losing after playing that many hands lies outside the first standard deviation. More simply, if the AP plays N_0 hands, then there is approximately an 84% chance he will be beating the house and only about a 16% chance that he will be behind. The number N_0 gives an idea of long the player will need to play to "get to the long run." The smaller the value of N_0, the fewer hands it will theoretically take for the AP to beat the house.

As the definition at bj21.com implies, for ordinary blackjack card counting, the values of N_0 are frequently measured in the tens of thousands of hands. At 100 hands per hour, the AP is looking at 100’s of hours of play to reach his N_0. Professional level blackjack card counting requires endless patience, travel and hard work to squeak out a small profit in the face of brutal variance. That's why there are so few AP's who are pure blackjack card counters.

The following table gives the values of DI and N_0 for hole-carding some popular proprietary games: 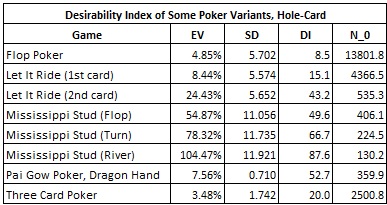 Seeing these numbers, it is no wonder why hole-carding Mississippi Stud is the favorite opportunity for APs nationwide right now. Hole-carding the Dragon Hand at Pai Gow Poker was a bonanza that lasted for years (it may still exist). Meanwhile, Three Card Poker (3CP) languishes near the bottom, with a DI of 20. This underscores the disdain that top APs have towards it. Also, note the incredibly low values of N_0 for most of these games. Confidence in beating these games is not a matter of tens-of-thousands of hands; it may be as few as a couple of hundred. The long run is one day for the hole-carder.

Things get even better when edge sorting is involved. I regret not having more information to share on this, but the following table makes a stunning point:

The DI for edge sorting Three Card Poker dwarfs most hole-carding opportunities. The AP needs fewer than 100 hands, not even 3 hours, to achieve his N_0.  With a DI over 100, edge sorting Three Card Poker is the single  best opportunity I have analyzed when it comes to safe and substantial profit. This value also shows the power of marked cards. The temptation is always a breath away: cheating is far superior to advantage play.

Finally, let’s consider hole-carding ordinary blackjack. An edge of 8% is reasonable for the discrete AP using cover who may not be getting a perfect read every hand. The standard deviation for hole-carding blackjack is about 1.2. This gives a DI of about 67 and a N_0 of about 225 hands. The braggarts who were haunting the message boards on bj21.com were surely talking about exactly these circumstances (or better). In the hole-carding bonanza that accompanied the early days of single-deck 6/5, DI’s of 50 and higher were commonplace. James Grosjean wrote in Beyond Counting, page 390,

"... There are several approaches to casino play, but the successful professionals that I know share two characteristics: they don't throw anything away, and they are aggressive ... I don't want to see you giving away your money so easily. Fight!"

The "trolls" at bj21.com were messengers bringing the good word for all AP-kind; and we shouted them down and banished them.

The cause of suffering may be desire, but desire has a number associated with it that allows it to be quantified. For casino game protection, if your desire is to safeguard your games, then look towards protecting the games that the professional advanced advantage players desire most.