Chapter 1 describes Punto Banco, the version of baccarat that is played in casinos in North America, Australia, Macau, and elsewhere (including online casinos).

The characteristics of Punto Banco are:

In this chapter, I’ll describe several different versions of baccarat that include: 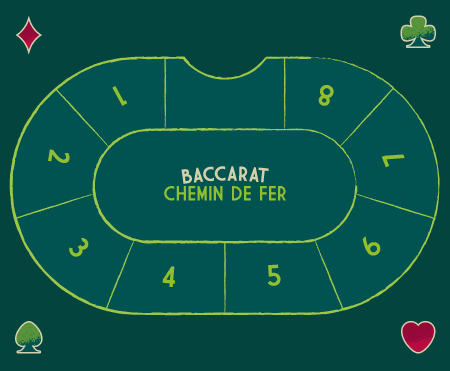 Chemin de Fer is a French phrase meaning “railroad” or “the railway.” This version of baccarat (also known as “chemmy”) is popular in casinos in France. (This was, in fact, the game that you saw James Bond playing in most of his movies.) The rules are similar to Punto Banco (see Chapter 1 for the rules) except the players have the following options:

Six decks of cards are used, and after the shuffle, one player is designated as the banker. (The option to be banker rotates around the table.) The banker wagers an amount of money that he is willing to risk. Each player in turn indicates how much they want to bet. If any player wants to the bet an amount equal to the bank, he would declare “banco,” and no other player is allowed to wager. (If the total of all bets made by the players is less than the bank, then bystanders may wager up to the amount of the bank.) The dealer (or in some casinos the banker) will give the two Bank Hand cards to the banker and the two Player Hand cards to the player that has wagered the most on the Player Hand. The players holding the cards will look at them.

Once the Player Hand is completed, the banker decides whether the Bank Hand stands or draws. After the bank decision is made, the cards in both hands are turned over and the winning hand is declared by the dealer. There is an interesting playing strategy for Chemin de Fer on https://wizardofodds.com/games/chemin-de-fer/ that is based on whether the player holding the Player Hand stands or hits with a total of 5. If you intend to play Chemin de Fer, I would suggest you use this Baccarat strategy. 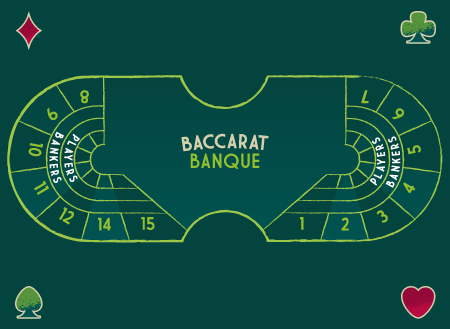 In this version of baccarat (also called “Baccarat à Deux Tableaux”) a player is determined to be banker (usually a person who puts up the highest stake, or the first person who signed up to play the game). The banker is the only player that can wager on Bank Hand; all of the other players must wager on the Player Hand. Moreover, the designated banker is more permanent; he or she remains the banker until the end of the shoe (or runs out of money or decides to relinquish the role of banker).

The banker and the croupier will position themselves opposite each other in the center of the oval table (seating for up to 16 players). Most casinos use three decks of cards. The croupier will shuffle the cards and then give them to a player on his right to shuffle; and then to the player on the left to shuffle, and finally the cards are given to the banker for one final shuffle. The banker will deal three hands from a dealing shoe as follows: one card to the player on his or her right, the second card to the player on the left and then a third card to him- or herself. He repeats the process so that three two-card hands have been dealt.

As in Chemin de Fer, a player can declare to “go bank,” meaning matching the banker’s entire stake. (If seated players combined wagers are less than the bank, then bystanders can make bets to make up the difference.) There are other rules regarding wagering that are often specific to each casino. 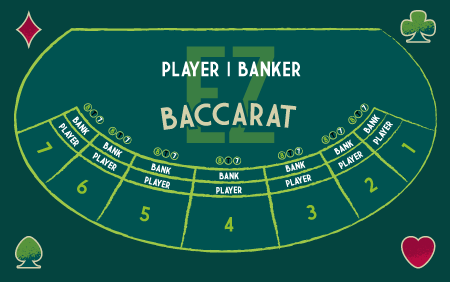 One of the characteristics of baccarat that often annoys players is the payment of the 5% commission every time they wager on the Bank Hand and it wins. Most players don’t understand the reason for the 5% commission and, therefore, paying the casino a part of their winnings irritates them. It took a while but someone finally developed a baccarat game without the 5% commission. The name of this game is EZ Baccarat, and it was co-invented by a former casino live dealer, marketing executive, and manager of one of the most successful baccarat rooms on the Las Vegas Strip (MGM Grand), Francisco TJ Tejeda. Here’s how the game eliminated the 5% commission, and in the process, become one of the most popular versions of baccarat in North American casinos.

The game is played on a table the size of a blackjack table (up to 6 - 7 players) and it has the same rules as traditional baccarat except for these important differences:

The Bank Hand in EZ Baccarat has a house advantage of 1.02% per hand, which is slightly lower than the 1.06% for the traditional baccarat. (House advantage on the Player Hand and Tie does not change.)

This is another optional side bet. The bet wins when a three-card winning Player Hand totals 8. The payoff is 25 to 1, and the house advantage is 10.19%.

CARD COUNTING THE DRAGON 7 SIDE BET 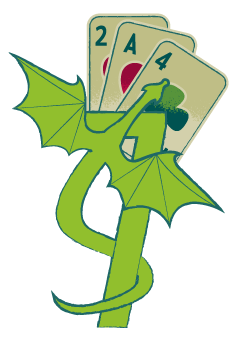 By removing each card in turn from an eight-deck shoe, and doing computer simulations studies, it’s possible to determine the effect each card has on the house advantage. In fact, this study was done by 888casino contributing writer Eliot Jacobson.

What Jacobson found was the following:

Jacobson assigned tags to the cards and developed several card counting systems, which were then tested by millions of computer simulations. Jacobson concluded from his study that:

CARD COUNTING THE PANDA 8 SIDE BET 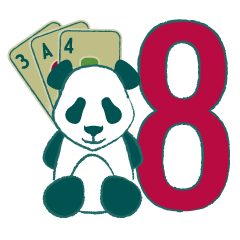 A similar computer simulation study was undertaken by Michael Shackleford on the Panda 8 side bet. Similar results were obtained for using a card counting system developed for this side bet.

Note: Betting less than $100 would make this card counting system not very profitable for average players.

There are several other commission-free baccarat games. The only other one that is reasonably popular in land-based casinos is called “Commission Free Baccarat” (also known as Punto Banco 2000 and Nepal Baccarat).

In this version of baccarat, a winning wager on the Bank Hand pays even money, except:

Bottom Line: Other than EZ Baccarat, I would be wary of any other “commission-free” baccarat games you might see touted in either a land-based or online casino without first investigating the rules and finding out what is the house advantage on the Bank and Player Hands.

In Chemin de Fer (or “chemmy”)
• A player is declared the banker and puts up a stake that other players can wager against.
• Players can chose whether to stand or draw on the Bank and Player hands.

n Baccarat Banque
• A player is declared the banker.
• Three hands are dealt: one for the players seated on the right side of the table, the second hand to the players on
the left side, and the banker receives the cards for the Bank Hand.
• Players can choose whether to stand or draw on the Bank and Player hand.

In No Commission Baccarat
• The 5% commission on the Bank Hand is eliminated.
• You win only 50% of your wager when the Bank Hand wins with a total of 6.
• The house edge is slightly higher than a traditional baccarat game (1.46% vs 1.06%).

By
Henry Tamburin Ph.D
How to Play Baccarat
Baccarat Game Versions
© 2020 All rights reserved. Back to top