I have long avoided the subject of baccarat mythology on this blog. I am a seeker of scientific truth. As substitutes for truth, fiction, story telling, anecdotes, false memories, mythology and outright lies frustrate me. But, for those very few baccarat players who are intellectually curious and are willing to put aside their falsifiable beliefs, it is worthwhile to post something here to benefit these individuals. Also, for those in the industry who are still on the fence about some of these questions, there may be some benefit in going through this review. Among the myriad of mythical beliefs expounded in most baccarat books and baccarat websites are:

Other lesser baccarat superstitions include:

This one picture, more than any other, expresses my baccarat angst: 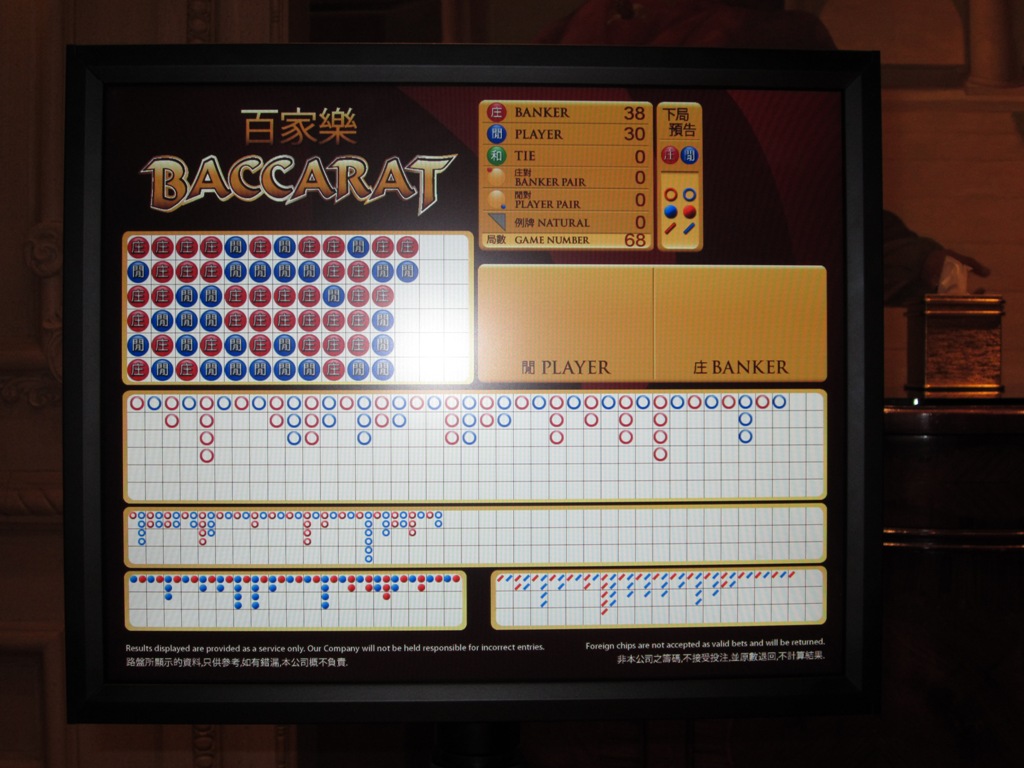 This picture is care of Michael Shackleford, the Wizard of Odds. The question I ask is, "what is the correct next bet here?" Ask yourself that question. Click on the image to make it larger if you want to give it more careful thought.

The best bet (assuming you are going to make a bet) is obvious. Bet on Banker. Why? It has the lowest house edge out of the three choices (Player / Banker / Tie). Nothing in that picture matters when it comes to making this decision.

Here is a picture of a scoreboard from a stadium baccarat area at a large Asian casino (thanks to the reader who emailed this to me). This picture gives three boards simultaneously being dealt at the center of the stadium. Blue = Player, Red = Banker. Quiz: what would you bet on in each of the three shoes pictured (click to make the image larger)? 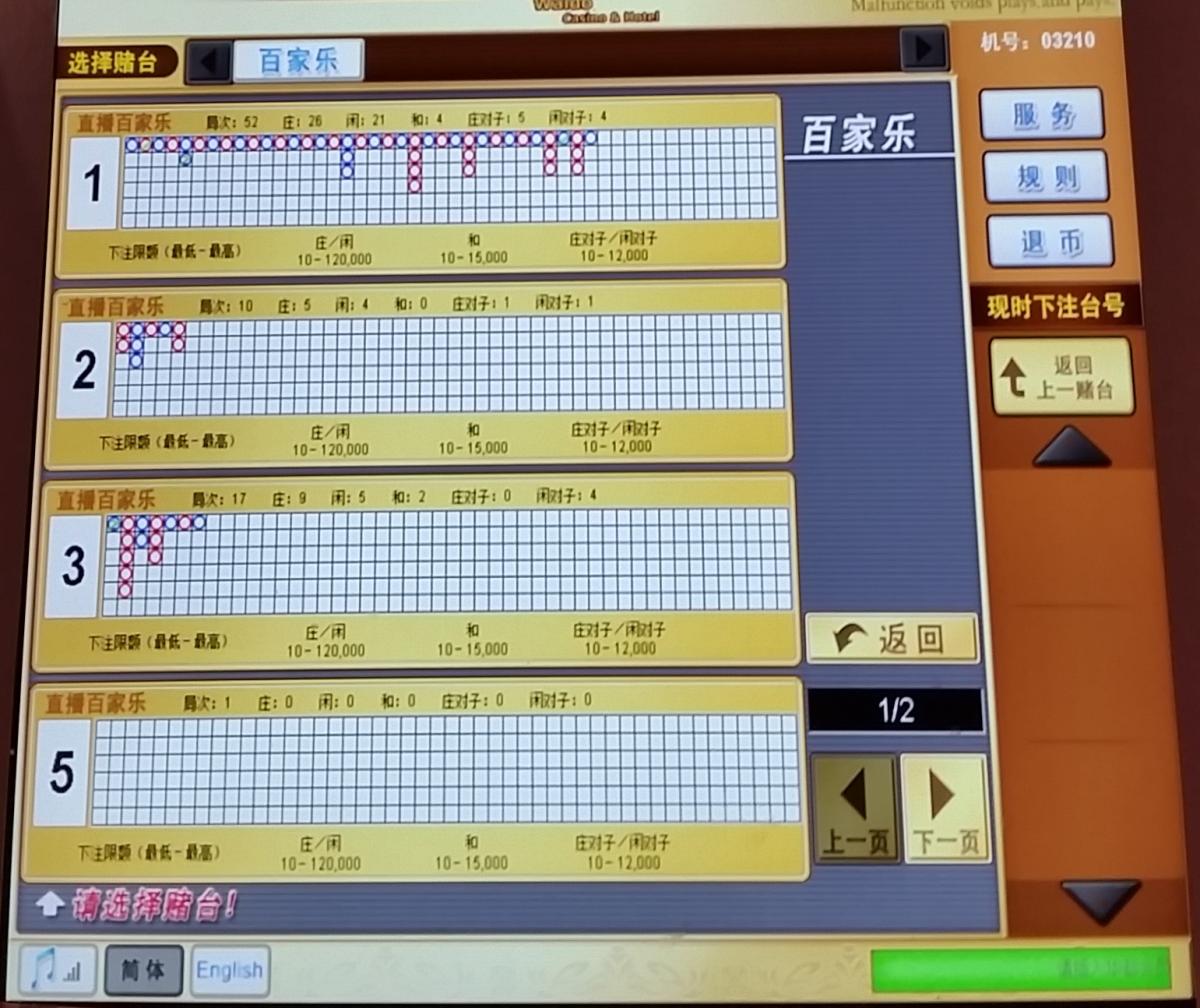 Using these scoreboards helps players identify false patterns which inspires the players to make larger wagers chasing the elusive streaks they portend. Larger wagers means more casino profit. Bet on Banker every time, if you must bet at all.

Another value these scoreboards have for the casino is that they speed up the game compared to the old-fashioned method of keeping score by hand. However, writing out these scorecards by hand somehow helps players convince themselves there is meaning in this noise where the electronic scoreboards do not. Again, if you saw this scorecard, what would you bet? I would bet on Banker.

I recently decided to take the dive and buy a few baccarat books in order to see what the intellectually curious baccarat player would find. I went to Amazon and searched for baccarat books. I was looking for something relatively cheap, non-kindle, and fairly high up on the rating list. In the end, I purchased five random books and one book I had previously heard good things about.

I've been having a hard time opening these books, let alone reading them. Most of the content makes no sense to me, though I am sure the author believes that what they are saying has meaning and value. I don't deny the author's faith in his content. However, from the standpoint of the scientific principles behind beating casino games, I can only describe my overall experience reading these books as angst-ridden.

Here are some choice quotes from these books:

The Basics of Winning Baccarat, by Avery Cardoza:

[There are actual card counting systems for baccarat. These systems win pennies on $1000 wagers. See this post. What is true is that baccarat counting systems have nothing to do with the counting tags given by Cardoza. What exactly is "in-house" research?]

Our own in-house research has shown that the two through six are cards that favor the Player position, while the rest of the cards, eight through the king, favor the Bank. The aces and sevens have little effect on either position and are considered neutral.

In each case, the mathematics tell us what to expect on average over many plays. Given that we expect 50-50 on average, you can think of that as the balance point. As you see outcomes (such as the number of singletons compared to runs) get farther and farther away from the 50-50 point, you can think of it as the shoe going off center.

Fortunately we can quantify how often you'll see the shoe go off center. Although the shoe may end up staying off balance, it seems prudent to bet that it will more likely re-center itself.

John Patrick's Baccarat: A Guide to the Jewel of Casino Games, by John Patrick:

[In case you've never heard of John Patrick, this advice should give you the whole story. It doesn't matter what betting system you use, just use a system!]

You're supposed to have a positive pattern in your method of betting, wherein every single bet you make is pre-determined, and based on the outcome of the previous hand.

I've told you what to bet when you win -- using the "up and pull" method of betting, and told you to go all the way back to the minimum bet in your series when you lost.(sic)

If you do not like my betting patterns, go make up your own. But be comfortable with the one you decide upon, and have that series based on your starting bankroll.

I don't give a rat's tail which system you use, or whether you bet conservative or aggressive. I like conservative, but suit yourself. I just want you to have an intelligent money management system, and abide by it.

[Streak betting at its finest.]

The Rule of Three says that if a thing happens three times in a row, you either bet on the streak, or you don't bet at all.

Let's use baccarat as an example. The Bank side has won three times in a row. Which side do you bet on now? We know the Bank and Player have almost equal chances to come up, not unlike heads or tails in a coin toss.

You can say, "Bank has come up three times, so now is the time to bet Player."

You could be right.

Now suppose the Bank side wins again. That makes four in a row.

Now you're sure Player will come up, so you bet it again.

Under my rule, you go with the flow or you don't go.

[I know Henry Tamburin personally. I have spoken with him about this book. He now admits that much of his work on card counting is flawed. He, unlike most, is willing to accept scientific proof.]

Analysis of all our baccarat lab computer tests indicate that the true casino percentage on Bank hand bets is probably closer to 1.0 percent than it is to the 1.17 percent figure established for a top of the shoe condition. We estimate that proper use of the counting systems set forth in this section (the test results of which were evaluated relative to straight Bank hand bets) will further reduce the casino percentage by one-half to three-quarters of a percentage point. This reduces the casino percentage to practically nothing and makes baccarat the best casino game for those who do not want to get involved with the hassles associated with counting in blackjack.

Baccarat for the Clueless: A Beginner's Guide, by John May:

[There are real methods to beat baccarat -- you'll find plenty of them on this site. But, as far as I can tell, there is exactly one pure baccarat book on the market that discusses any of these methods at length. I'm going to give this one book a shout-out, even though some of the content greatly exaggerates the potential of the methods it presents. Here are some sample quotes.]

There is a new category of baccarat systems seller emerging who pretends to sell winning card-counting systems ...

A computer could tell me exactly when any of the three bets [Player, Banker, Tie] was favorable. All I had to do was tell it which cards had been dealt. Unfortunately, when I wrote a program to detect advantageous situations on my home computer the results were not spectacular. With a game dealt down to ten cards and perfect wagering any time there was a favorable situations, I could expect to earn approximately 4.5 percent per shoe of whatever amount I bet ... So, if I bet $1,000 every time my computer told me I had an edge, I'd make $45 for every shoe I played.

[See this post for a comparison of May's results with my own.]

[There is one book that I want to single out. I've had this book in my library for quite some time. It is a college-level textbook for a course on casino management that happens to include some information about baccarat. What I read in this book just floored me with its stupidity. It's one thing for random gaming authors to come up with this stuff. It's an entirely different matter when nonsense is passed off as science at the college level.]

Because there are only two major bets, the simplest strategy is to bet the minimum, usually $20 and alternate bets -- banker, player, banker, player, and so on.  Unless you have a really bad run of luck, you should at least break even, since there is almost an even split between the two hands. However, with this strategy, you must pull $20 from the second win so that you bet with the casino's money, not yours ... Since the odds are around 50% that one of those hands will turn up, it is a simple bet and you shouldn't go too far astray.

The authors go on to give an alternative to the player, the "1-3-2-6 betting system,” that they claim is "attractive because you risk only two betting units for a chance to win ten units."

[I found the book online as a pdf. Its table of contents reads like an itemized list of gambling mythologies (click on the image to make it larger).] 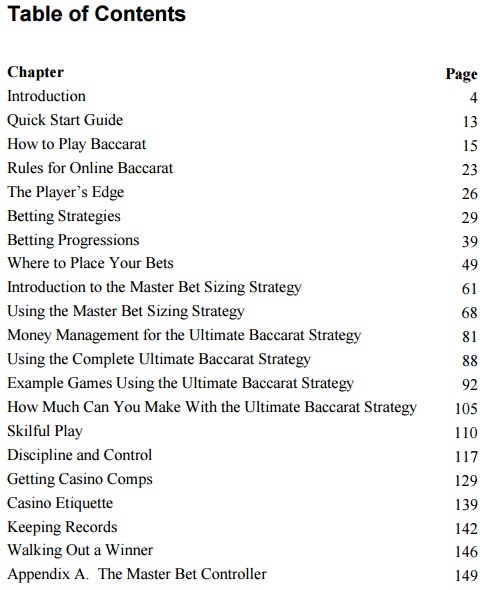 In this blog and in my other writings, I have not previously addressed the mountain of baccarat misinformation that's pushed onto the intellectually curious player. Out of the seven books mentioned above, only John May's book is worth buying. Simple searches on Google and YouTube offer almost nothing of value. And this is just the English language market.

Baccarat, more than any other casino game, inspires the irrational and unsound argument.

I don't begrudge the casino its profit, after all, I work for the casino industry. But I also work on behalf of fact-based information for anyone who is honestly seeking truth. Getting a good baccarat education should not be such a challenge. It's a baccarat desert out there. But there are a few oases. Find them.

Note. All material quoted from copyrighted sources in this article is being used under the fair use doctrine for educational purposes.