There is a variant of baccarat that was brought to my attention last July. This version, called "2-to-1 Baccarat," is non-commission. It has a fairly significant twist in the rules. A three-card winning total of 8 or 9 pays 2-to-1 for bets on the winning side. To balance this extra payout, a bet on Banker or Player loses if the hand ends in a tie.

My first instinct was this variant should be highly countable. Like the Dragon side bet for EZ Baccarat, I thought the winning edge would come from being able to identify situations when hands that use 3 cards are more likely. It turns out that my instinct was wrong.

2-to-1 Baccarat was available at Crown Melbourne casino in Australia. The following documentation contains the game rules on page 21:

Here are how the rules are explained in this documentation:

The following table gives the combinatorial analysis for the house edge and variance for both the Banker and Player bets. 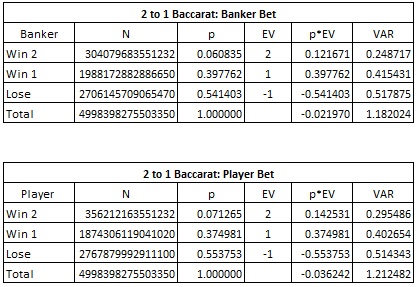 From this we see:

These edges are considerably higher than on the normal game. From a player's perspective, I wouldn't expect this game to succeed. First, losing tie hands will be an objectionable outcome for traditional players. Second, there are already two commission-free baccarat variants that leave the original game essentially intact and keep the house edge low, namely EZ Baccarat (three-card winning 7 is a push) and the version where a Banker winning 6 pays 1-to-2.

As for countability, the usual procedure is to compute the effect-of-removal (EOR) for each card and try to develop a system, then simulate the system to see how it performs. However, there is a method that can be used before any of the work is done to develop a card counting system that gives a practical upper bound to a game's potential vulnerability.

Any card counting system attempts to identify situations where the player has the edge over the house by summing "tags." In practice, these tags are directly related to the EOR for each card. The sum allows the counter to compute a true count. The theory is that when the true count is large enough, then that should correspond to having an edge over the house.

But what if the situations where the player has an edge over the house are rare to begin with? No matter how good the count, the count can't make positive situations occur out of thin air. How can we determine the potential edge?

The approach is to simulate a fixed point in a shoe, somewhere deep just before the cut card, and to see how often an edge occurs at that point, and to quantify that edge. Any card counting system is then limited by this fixed barrier of perfect knowledge. This is the method I used for 2-to-1 baccarat.

I simulated 37217 shoes. For each shoe, I dealt the cards out until 26 unseen cards were left. The specific point when 26 cards are left corresponds to one of the last  hands in the shoe. I then computed the exact edge for both the Player and Banker bets on 2-to-1 baccarat at this point in the shoe. I collected these results and imported them into a spread sheet where I conducted further analysis. Here are the results: 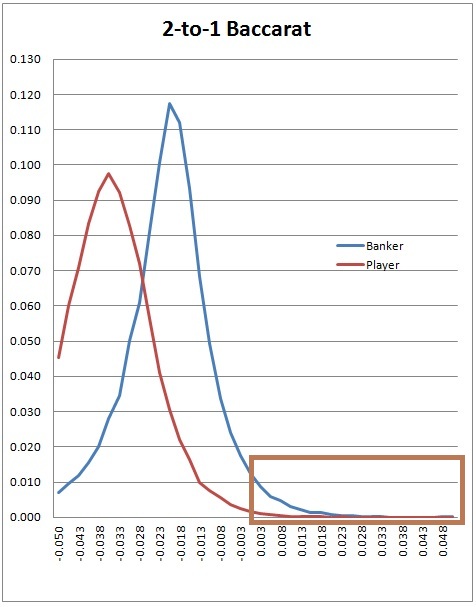 There are two geometric features about this curve I want to point out. These correspond to the average edge when the Banker/Player bet is favorable and the frequency of the opportunity. These are the two numbers that allow the total potential income to be computed.

In light of this graph, when I computed the EORs, it came as little surprise that these values were very small compared to the edge that must be overcome. Recall that the baseline edge for the Banker bet is 2.197% and for the Player bet it is 3.624%: 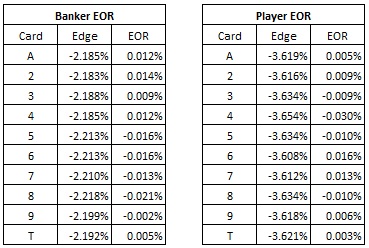 My conclusion is that 2-to-1 baccarat is not vulnerable to card counting.

How to Play a Soft 17 at Blackjack

The 3 most misplayed hands in Blackjack

4 Blackjack Mistakes (And How to Avoid Them)