Although baccarat is dealt from a shoe, it does not have a substantial vulnerability to card counting (see this post). During a recent training I delivered, one of the attendees pointed out that there is an Android APP that allows a user to compute the exact edge for the Banker, Player and Tie bets at any point in the shoe. To use the APP, the player enters the exact cards as they are played from the shoe. Before placing his wager, the player hits a “compute” button, which then outputs the edges. After seeing the APP in action, I wondered if it (or an equivalent technology) could be used in combination with a rolling chip program to yield an edge for the player.

In confess that the idea for this method of gaining an edge over the house began as pure speculation. However, after I made this post, a director of surveillance at an international casino wrote to me, saying, in part:

… we had a few strange baccarat playing customers in our casino who seemed to win too often and too much. I have always looked very suspiciously at ALL the players and I have stopped a few of them using smart phones, different pen-and-paper note making and such. The App you mentioned has been on the market for almost a year and I was one of the first people to discover it and realize the potential of using technology like this to help the players beat the house. I have looked for other ways of using the latest technology in a stealth way, using a team of players acting in a group for one reason only - to get the edge over the house using the smart phones, smart watches, etc. in a way that is not suspicious and even more, in a way that is not discoverable.

In this post, I will make the following assumptions about the way the game of baccarat is offered:

If a square player is making random Player and Banker bets, as part of some bogus “system,” the house edge for the player will fall somewhere between 1.06% (all Banker bets) and 1.24% (all Player bets). As I showed in this post, by using the Android APP to always make the optimal wager (Banker, Player or Tie) with the lowest house edge each round, the player can reduce the overall house edge to 0.878%.

To get more detail about what the optimal system looks like in practice, I generated 1000 shoes using this optimal betting system. This data can be found in the following Excel spread sheet:

It comes as little surprise that the optimal betting system is to bet on Banker for the first few wagers. But, a quick inspection will show that there are shoes where, even before the 10th hand, the best bet is to wager on Player. On the other hand, Tie bets are very rare, usually appearing very near the end of the shoe. However, Tie wagers, when they occur, often yield edges that favor the player.

After a week’s worth of massive simulations (in case you’ve been wondering why I haven’t posted recently), I found that the player can, in fact, get an edge over baccarat by combining the use of the Android APP (or equivalent technology) with a rolling chip rebate. For convenience, I assumed a rolling chip rebate of 1% in my analysis.

I examined two strategies using the Android APP that lead to a player edge with a 1% rolling chip rebate. These strategies are as follows:

The player begins by fixing a specific edge as the boundary for making a wager. For example, if the player fixed a house edge of -0.95%, then he would only wager when the house edge for one of Banker, Player or Tie was greater than -0.95%. (Note, negative percentages indicate that the house has the edge, positive values indicate a player edge). By selectively wagering, the player avoids making wagers that are significantly unfavorable. The rolling chip rebate is then enough to put the player in positive territory.

I simulated using the “By Edge” strategy for entry points -1.00%, -0.95%, -0.90%, -0.85% and -0.80%. For each of these, I ran a simulation of two hundred thousand (200,000) eight-deck shoes, assuming the player always made the optimal wager whenever the house edge was equal to or greater than the given entry point. Each simulation took about 12 hours to run. The following table gives the results for these edge entry points, assuming a 1% rolling chip rebate: 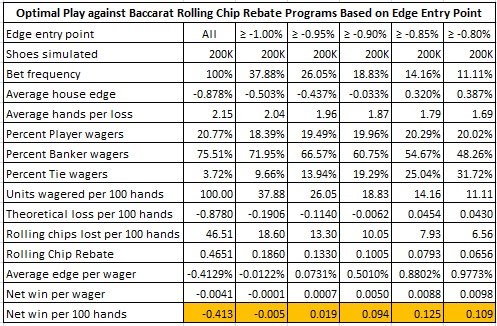 Based on the bottom row, we see that the player can get an edge over the house if he plays with an entry point set at -0.95% or greater. This entry point yields an average house edge of-0.437% using the APP. The player is able to overcome this house edge because of the 1% rolling chip rebate he receives. In combination, the player will win, on average, about 0.019 units per 100 hands. Note that this is not 100 hands played; the bottom row refers to 100 hands observed. On average, he will play 26.05 hands out of every 100 that are dealt.

Note also that if the player uses an entry point set at -0.85% or greater, then he is beating baccarat outright, without the need for a rolling chip rebate. Indeed, he has an average edge over the casino of 0.320%, based on playing about 14.16 hands out of every 100 dealt. If the player is getting a 1% rolling chip rebate, then he is winning 0.125 units per 100 hands.

The player begins by fixing a hand number as his entry point. For example, the player may choose to enter each shoe at hand 50. In this case, he never plays the first 49 hands, while he keeps track of the exact cards played on the APP. When the 50th hand occurs, the player enters the game and plays from that point to the end of the shoe. This strategy works because the edges go through more variation towards the end of the shoe, so the player can usually find a wager (Banker, Player or Tie) with a low house edge. Again, the rolling chip rebate is more than enough to put the player in positive territory.

I simulated the “By Entry Point” strategy for entry points at 40, 50, 60, 65 and 70 hands. For each of these I ran a big simulation, assuming the player always made the optimal wager using the APP whenever the hand was at that point in the shoe or later. The following table gives the results for these hand entry points, assuming a 1% rolling chip rebate: 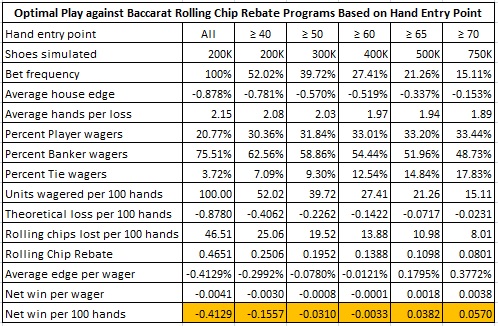 Based on the bottom row, we see that the player gets the edge over the house if he plays with an entry point at hand 65. This entry point yields an average house edge of -0.337% by using the APP for optimal play. The player is able to overcome this house edge because of the 1% rolling chip rebate he receives. In combination, the player will win, on average, about 0.038 units per 100 hands. Note this is not 100 hands played; the bottom row refers to 100 hands observed. On average, he will play 21.26 hands out of every 100 that are dealt.

The following Excel spread sheet allows the user to input a rolling chip rebate percentage and see the effect of that rebate on the edges that can be obtained by the player who is using these strategies:

I only considered one set of game conditions in my simulations. There are locations internationally where rebates of 1.25% or higher are offered to high rollers. Elsewhere, players are able to negotiate games with no burn cards and the cut card placed at seven (7) cards. Either of these will swing the edge significantly towards the player side. I have not simulated the edges that can be obtained under these conditions.

The following are my recommendations for protecting baccarat from this method of gaining an edge:

My opinion is that baccarat is facing a new form of vulnerability that combines technology, liberal game conditions and rolling chip (or dead chip) incentive programs. The two strategies I presented are not especially profitable and may face serious practical challenges. But game protection should not be based on looking in the rear view mirror.