Non-negotiable (NN) rolling chip programs are used by casinos to award cash rebates to their high-rollers for their play. The rebate is based on returning a fixed percentage of all NN chips purchased and lost by the player. In this post, I covered the basic mathematics of NN programs, including computing the effective house edge for each NN chip used. I also showed how to compute the T-Win for a player based on the exact number of NNs the player used. What I didn’t do is show how to use these numbers to tell something about the likelihood of a player achieving a given result.

Risk analysis can be used in two directions. In the backwards version, the question is “what is the likelihood a player did that to us, based on chance?” The most common statistic that measures backwards looking probability of a result is called the z-Score. In the forward-looking version, the question is, “where can I expect this player to end up after a certain amount of play.” These are called confidence intervals. The current post concerns the first question, z-Scores.

To follow along, and for your own use, please download and open this spreadsheet. The green cells are for the user to input his own data.

In this spreadsheet, I make the following assumptions:

A slightly more complicated version of this spreadsheet can be created based on tracking the player’s exact wagers. This sort of tracking is sometimes done for selected premium players at some large casinos.

Green cells correspond to user-input. The following shows an example of a top-tier high roller who is getting a NN cash rebate of 1.6%. This player played and lost 5,000 NN chips. Each chip having a $100K denomination. At the end of his play, he was ahead $4M over the casino.

From this data, we see that the house edge per NN chip, with a player who is splitting his wagers evenly between Banker and Player bets, with a 1.6% rebate, is

For those interested in the arcane, the standard deviation per NN chip, for a player who is splitting his wagers evenly between Player and Banker bets is:

Also, each NN chip is played an average of 2.241 times on Banker bets and 2.181 times on Player bets. So, for a player who is playing an even mix of Player and Banker bets, the number of times each NN chip will be used before it is lost is, on average,

It takes a long while to play 5,000 NNs. At 2.211 plays per chip, it takes about 11,055 hands to wash (lose) these chips. At 40 hands per hour in a squeeze game, it will take about 276 hours to wash these chips. That’s a lot of baccarat. Even a player who is playing several hours every day will take at least two months to log this many hours.

The following table gives the z-Score risk analysis for this player: 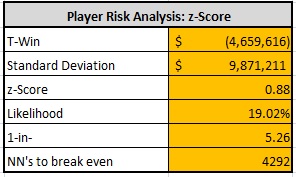 The T-Win for this player is about $4.66M. That’s the amount the casino expects to win from this player based on his total action. The second number is the player’s standard deviation (STDEV). The z-Score is given by the formula:

The z-Score gives the number of standard deviations the player’s final result is above his T-Win. If the z-Score is positive, then the player is doing better than his T-Win predicts.If the z-Score is negative, the player is losing at a faster rate than predicted by his T-Win. In the real world, people very rarely lose at exactly the predicted rate. But this has nothing to do with luck, living a good life, good fortune or anything else. It’s just a reflection of the statistical noise predicted by the standard deviation.

The next value, “likelihood,” describes how often a player will win the given amount (or more), by pure chance. In the case of this player, we see that this chance is 19.02%. That is, roughly 19% of players who are using NN chips of denomination $100K, will be up $4M (or more) after playing through 5,000 NN chips.

For the statisticians out there, to get the likelihood, I use the Excel function “normsdist” that gives the area under the normal curve to the left of the indicated z-Score. So, 1 – normsdist gives the probability of the player achieving the given result or better.

The "1-in-" row in the output above is easy. Just take the reciprocal of the Likelihood. This gives the frequency of a player achieving the indicated result or better. In other words, roughly 1 person out of every 5.26 people will win $4M (or more) after playing through 5,000 NN chips of denomination $100K.

The last row, NN’s to break even, is included in response to the common but mistaken opinion that the objective of a casino is to beat each player. That’s not what casinos do and it’s not how casinos make money. Individual players don’t exist when it comes to assessing profit – all that matters are the wagers made and the house edge associated with each wager (minus expenses, of course). The player who makes the wager, whoever he is, what he looks like, the clothes he wears, and everything else that defines him, doesn’t matter (provided he is playing the game on the square).

So, for example, when upper management looks at the player in this example, they are annoyed by the fact that the player is winning $4M after months of play. They want to know how long it is going to take (on average) to get ahead of this player. They are obsessed with beating this player.

The answer is to simply figure out how many NN chips it will take to generated $4M in T-Win against this player. As computed above, the casino is earning $932 in T-Win per NN chip used. It follows that on average it will take $4M/$932 = 4,292 NN chips for the casino to break even. At 2.21 wagers per NN chip, this is equivalent to 9,485 hands played. At 40 hands per hour, it will take, on average, about 237 hours of play to break even with this player.

To finish this post, I want to give you a little quiz. I am going to describe six premium players by telling you the NN rolling chip rebate they are getting, the denomination of NN they are using, the number of NN’s used by their play and the player’s final result. Two players will get a 1.6% rebate, two will get a 1% rebate and two will get a 0.4% rebate.

Your answer to each quiz question will be to indicate how nervous this player makes you, on a scale of 0 to 3. Here is the doctor's “nervous” scale:

For example, I hope the player above would be either a “0” (or “1” if you are an overly nervous person) on your nervous scale.

After taking the quiz, I invite you to use the spread sheet I provided to do the analysis for each and see the actual result. In case you don’t want to do this, the likelihood for each player is given at the end of this post (don’t look yet!). Hopefully, this will give you a good sense for how accurate your instincts are for players in your casino.

Here are the players to consider. Score each as you go.

My experience with casinos that offer NN rolling chip programs is that many underestimate the exposure to risk they assume by offering these programs. Players can win for a long time and the result can be well within normal statistical ranges. That’s hard to believe for many in the casino industry. They expect to beat each player. Giving cash back to players based on the number of NN chips they play is the same as lowering the house edge, and the house edge is where the casino earns its income. Once the house edge is lowered, winning players are more likely to occur.

The bottom line for a casino’s profitability is being able to maximize the equation:

The name or gambling history of an individual gambler is not part of this equation.

Here are the likelihoods for the six examples above, together with the right answer based on z-Score analysis:

Player #1 should be scored 0, no risk. I hope you got that one right. It was a gimme.

Now look at player #2 and player #4. Did you give them the same score, or did you rate the player who won $4M as a higher risk player? We tend to exaggerate the risk associated with larger losses. Both unit size and rebate amount are part of the overall risk equation for a player.

Player #3, with a frequency of 1-in-222, is a player I would note. He is just enough above normal that I would want to check back with him after a while to make sure things didn’t get worse. There are about 50 players with results as good as his every day happening just by chance in a large casino. If you concerned yourself with all such players, you wouldn’t have time to read this post.

By a long way, Player #5, the one who won the least, is the one whose risk should concern you the most. However, not a single player in the list is a “3.” Results that are 1-in-6595 happen every day by ordinary chance in most large casinos. You can’t accuse every player who has a couple of lucky months of being a cheat. Some players will win over an extended period just by chance. There’s nothing you can do about it.