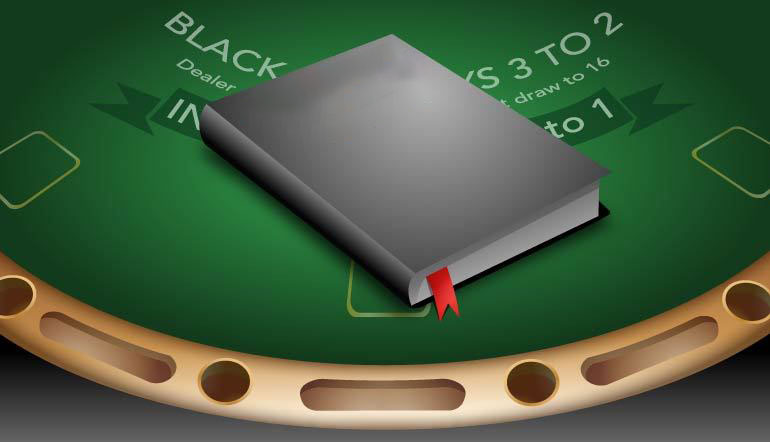 Over the past 50 or so years, I’ve read my fair share of books containing trip reports written by card counters. But none was as unique, and well-written, as the recently published The Blackjack Insiders. (Publisher: Huntington Press).

This is not a how to play and win book on blackjack; rather it’s an interesting and thrilling story about how a blackjack dealer decided to turn the tables on the casinos and beat them at their own game.

The dealer is Andrew Uyal, who was employed as a blackjack dealer (and later a floor supervisor, and pit boss) at the CasaBlanca Casino in Mesquite, Nevada. At age 25, Andrew is an up-and-coming employee who is well-liked by his peers and supervisors, with a lot of potential for advancement. However, Andrew was recently divorced (a costly one), had a young son (B.J.) to support, and because he didn’t earn a big salary, money was tight. He was ready for a change.

His shift boss, Mark Stevens, takes a liking to Andrew. It turns out that Mark has been secretly card counting on his days off, and convinces Andrew to try card counting under his tutelage.

Fortunately for Andrew, Mark spends his days off teaching him everything he needed to know to succeed at card counting. This included learning the basic playing strategy, how to count the cards, how to bet and deviate from basic strategy based on the count, and a whole lot more. This was intense training and practice that continued for weeks until Andrew could accurately play his hands through an entire shoe several times (with Mark dealing) without making any playing or betting mistakes.

Andrew and Mark began their card counting adventure with weekend trips to Las Vegas. Mark was so confident of Andrew’s ability that he staked him with “five one hundred dollar bills” and smartly told him to “start with small bets.”  Andrew’s first trip as a card counter was successful.

The book chronicles the many subsequent trips the two of them made to casinos not only in Las Vegas but New Orleans, Biloxi, Tunica, Vicksburg, Laughlin, California,  Wendover, Foxwoods, Kansas City, St. Louis, and elsewhere. The chapters explain in great detail how each trip went; places where they stayed, names of casinos they visited, the types of playing conditions they encountered, the casino heat they experienced; the different barrings they experienced, the big winning and losing streaks, and the emotional highs and lows.

One thing that you’ll quickly discover when you read this book is their aggressive playing style. Their goal was to win as much money as they could from each casino they visited so it was common for them to play long hours in the same casino with aggressive bet spreads and some very unusual (but mathematically correct) deviations from basic strategy based on the count (e.g., doubling on soft 20 and a 7 against a dealer’s 6 upcard based on the index number).  They were not too concerned about being backed off at any one casino because they decided early on that they were going to go on the road to play blackjack professionally for only a short period of time (it actually lasted about a year), and probably wouldn’t return to any casino that backed them off until six months had passed.

(As an aside, the above tactics used by Andrew and Mark were different than what I used when I began card counting some 50 years ago. With only a limited number of legal U.S. casinos back then (i.e., Nevada) my goal was on longevity (i.e., playing in a manner that stayed under the casinos’ radar). But times have changed. Today, over 30 states (commercial and tribal) offer legalized blackjack games.  The result: the younger (and probably smarter) card counters mostly use the above “hit-and-run, burn-out, advantage-play technique.” I’m not saying this is wrong; just different.)

Another striking point you’ll learn from this book is the comaraderie that developed between Andrew and Mark. They rarely played together, each had his own bankroll, and they mostly played in different casinos on the same trip. (Sometimes, one or the other would also take solo playing trips.). However, after every playing session or extended trip, they would communicate the highs and lows of their session and trip. Often Mark would encourage Andrew not to worry when he experienced a losing session. (Some of the other benefits of team play, besides the motivational support you get from your team members, especially when you have a really bad session, are the reduction in variance; practicing together and watching the improvement in each player’s skills; and probably the most important benefit, being able to win a lot more money with less risk than playing solo.)

Although you’ll read about the many euphoric winning sessions and streaks that they enjoyed, you’ll also learn about what can happen to a card counter’s emotions when he or she experiences a long losing streak.  (Like Andrew’s long five-month losing streak where he lost $16,000, about half of his bankroll. Chapter 16 describes this losing streak; it should be mandatory reading for any wannabe card counter.)

There are other points in the book that may be overlooked by most readers but shouldn’t be. They include:

What’s in it for you if you purchase and read this book? A great real-life story on how a depressed blackjack dealer having a tough time during his life took the risk to become a card counter, and go on the road to play blackjack professionally for a living.  Andrew ended up winning a fair amount of money over the year he played with Mark. (I’ll let you find out exactly how much he won when you read the book.) But it was more than just the money. When Andrew looked back on his one-year adventure, he wrote the following on the last page of his book.

“I thought about how much the game of blackjack had done for me. It started by giving me something productive and engaging to focus on during a tough time in my life. It grew to help me financially. It afforded me a chance to travel the country … A mere card game had changed my life and put me on the path toward success ... At the end our goal was accomplished. We played. We saved some. Most importantly, we collected great memories during it.”

Note: After their successful one-year journey as professional card counters, Mark planned to take a 9–5 job at a financial advising company, and Andrew made the move to Las Vegas with his son to work in the casino industry. The book ended appropriately with this quote:

“The End Is Just a New Beginning.”

Book Review
About the Author
By
Henry Tamburin Ph.D