Is Doubling for Less a Smart Play? 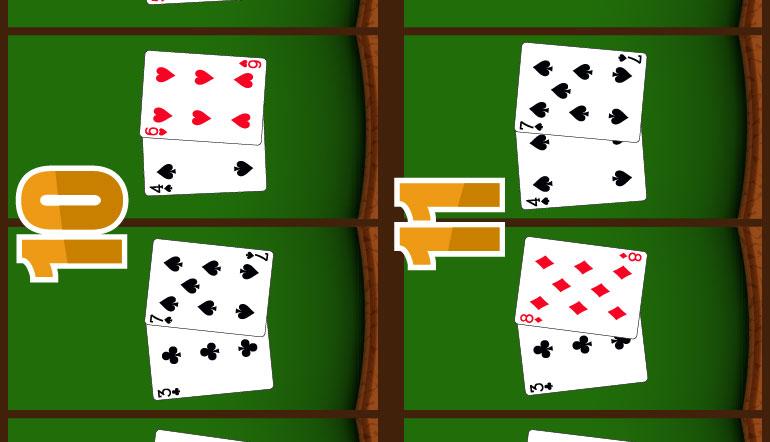 A long time ago when I was playing blackjack, a fellow table player (who had been steadily losing) went ahead and unexpectedly placed four green chips (total of $100) in his betting spot.  The dealer dealt the cards, and I noticed the player cracked a smile as he stared at the good hand he was dealt — a 7-4. But his smile quickly turned to a frown when he glanced at the dealer’s upcard – a picture card.  When the dealer got to the player, he picked up four more green chips from his chip-stack as if he were going to double down. But instead, he hesitated and intensely stared at that dealer’s picture card. He probably knew that the basic strategy play for an 11 against a dealer ten was to double down; however, I could tell he was getting a little queasy about putting out another $100 and possibly losing $200 if the dealer were to beat him. It seemed like forever until he finally made a decision, which rather surprised everyone. Instead of doubling down for another $100, or possibly just hitting his hand, he instead took a middle-of-the-road approach and shoved out one green chip ($25),  nervously announcing to the dealer, “I’m going to double for less.”

It turns out he pushed on his hand, and he quietly left the table with far fewer chips than he came with. Another player then made this comment to the dealer: “I didn’t know that you could double down for less.” The young dealer responded, “Yes, and that’s a pretty smart play when I’ve got a strong upcard.”

Let me say this as politically correctly as I can. Doubling for less is not a smart play, and any dealer who offers this advice to players needs to read a good book on blackjack.

Let me pause for a second to ask you this question: Which of these betting propositions would you take?

While you ponder the answer to this question, let’s get back to this player who decided not to double for the full amount, but instead, creatively doubled for less. If you remember, he bet $100 on his 11 against a dealer’s 10 and then “doubled” for $25.  Let me show you what that play cost him, compared to doubling down for the full amount, or just hitting his hand.

If you hit an 11 (potentially more than once) when the dealer shows a ten, you will win 56 percent of the time on average. This means that, for every hundred times you get this hand, with pushes excluded, you can expect to win 56 hands and lose 44 hands.

His net expectation is the difference of his expected win minus his expected loss, which equals +$1,200. Not bad, and it’s obvious that hitting an 11 against a dealer’s 10 [aha!] is a profitable play. But, you can do even better when you double down.

OPTION #2. DOUBLING FOR THE FULL AMOUNT

Blackjack players have the option to double down on any two first cards. (Although some offline and online casinos will restrict players from doubling on some initial hands, the vast majority of casinos allow DOA or double on anything.) When you double down, the casinos will allow you to make a secondary bet up to the amount of your initial wager (meaning you can double your initial bet, which is why this rule is known as doubling down).

In return for the casino’s allowing you to double your bet in beneficial situations, you are limited to only one draw card. Therefore, if you were to double down on 11 and drew a 3, you are stuck with a 14. Because you can’t draw more than one card when you double down, the percentage of the times that you win your hand is often less than for  hitting.

You’re probably saying to yourself, “Wait a minute ... if I win fewer hands when I double down, how  can it be a better play than hitting?” Stay with me and I’ll explain.

In order to analyze the benefits of doubling down, we have to factor in the amount bet. In the above example, he could have doubled for the full amount of $100, which equals a total of $200 wagered on the hand. Therefore, his expectation, if he would have doubled for $200, is as follows:

If you compare the expected win of $1,600 by doubling down for the full amount with the $1,200 if you hit instead, you can clearly see the answer to the question I posed to you earlier in this article, namely:

Now let’s take a look at that doubling-for-less play, which the dealer praised.

The following table summarizes the expectation for the three possible choices he had on the hand.

It turns out that his brilliant double-for-less play was the absolute worst of the possible three plays he could have made. He would be $200 better off hitting his 11 against the 10, or better yet, $600 better off if he doubled for the full amount. (I’m sure the casino bosses were thrilled when he decided to creatively double down for only $25!!) You’ve got the best of it when basic blackjack strategy says to double down, so always double for the full amount and never, never double for less.

Note: Of course, he could have doubled for all different amounts up to $200, and many of them would have had a higher Expected Value (i.e., EV) than hitting.

But wait, because there is more to this story. What if a player doesn’t have enough bankroll to make a full double down bet? Or how about a player that would have sleepless nights if he made the secondary $100 wager and lost $200 on the hand? My sage advice to these players is this: When you play live blackjack you need to have enough bankroll to support making occasionally large bets, including double downs and pair splits, and if you happen to be very risk averse, such that losing a big bet causes you emotional problems or sleepless nights, then you need to be betting at much lower stakes or to find a hobby other than blackjack.

There is one time where doubling for less can be a brilliant play and that’s when it’s crunch time (i.e., last hand) in a blackjack tournament.  I learned this ploy from my good friend and tournament expert Kenneth Smith (author of the books How to Win More Blackjack Tournaments, vols. 1 and 2.). In a future article on blackjack tournament strategies, I’ll explain how and when doubling down for less can be a very powerful strategy in a tournament.