How to Play a Hard 16 in Blackjack? 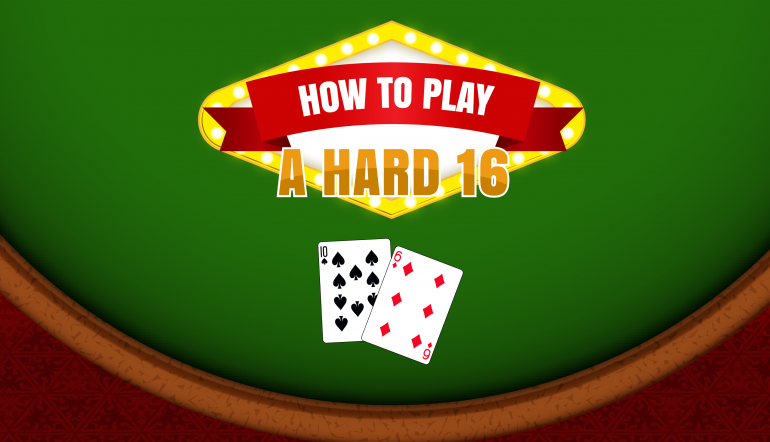 In this article you will learn how to play a hard 16 when you play blackjack.

A hard 16 is a blackjack hand that contains either no Aces, or if an Ace is present, it counts as one. Some examples of hard 16 are:

There are three viable options: hit, stand, or surrender. Which strategy you invoke depends on what the dealer’s upcard is and the rules of the game.

The following generic basic playing strategy summarizes how to play your hard 16 without regard to the actual cards that comprise your hand.

A more advanced playing strategy with extra precision considers the composition of cards that make up your 16. For example, if your 16  is comprised of three (or more) cards, say 5 plus 6 plus 5, it is played differently than if it is comprised of, say, a 10 plus 6. The composition-dependent strategy is as follows:

Additionally, if the hard 16 is the result of a pair split, then stand (instead of hit).

REASON FOR THE STRATEGY

A hard 16 is one of the worst hands you can get when you play blackjack because you will lose more hands than you win no matter what strategy you invoke. However, you can minimize your losses if you follow the previous playing strategy.

The reason you should surrender a hard 16 is when your chance of winning is less than one out of four hands, i.e., your expected loss is worse than 50%. This means that statistically, if playing the hand has less than a 25 percent chance of winning and consequently greater than a 75 percent chance of losing, you will save money in the long run by surrendering the hand instead. This is the case with surrendering hard  16 per the previous strategies.

The reason you stand on hard 16 when the dealer’s upcard is small (namely 2 through 6) is because the dealer’s chances of busting are relatively high (35 to 42%). In this situation, you don’t want to risk busting your hard 16 hand by drawing another card because you automatically lose even if the live blackjack dealer subsequently busts in the same round.

When the dealer’s upcard is 7 through Ace, the probability of the dealer’s busting is lower, and she or he is more likely to make a pat (17 through 21) hand. In this situation, you are better off hitting 16 (if surrender is not a viable option), even at the risk of busting, since you will lose less in the long run (compared to standing).

In the case of a multi-card 16, you should stand instead of hit against a dealer’s 10 upcard because of these reasons:

Keep these rules in mind before surrendering, hitting, or standing on a hard 16 and you will always lose less in the long run.
For a complete basic playing strategy for any given mix of playing rules, consult Chapter 3 in the Ultimate Blackjack Strategy Guide.