When to Split 10s in Blackjack? 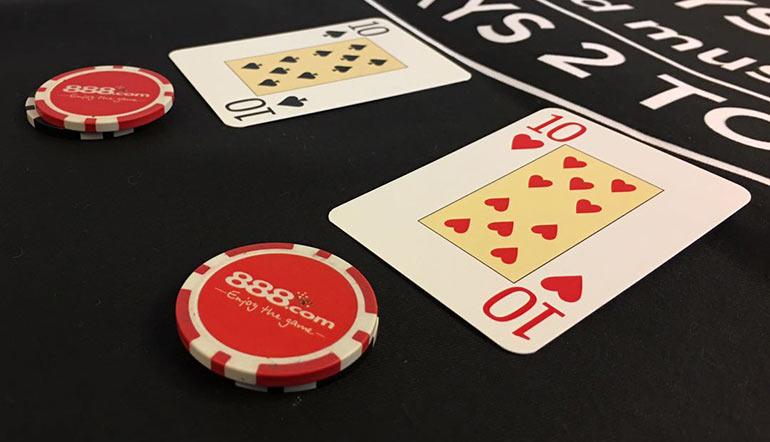 When it comes to splitting 10s in the game of blackjack, the bottom line should be:

There are two types of blackjack players who split a pair of 10s. The first is the casual player who has no idea what the right playing strategies are for blackjack. The other is the pro who knows the game inside and out. How can splitting tens be bad for the casual player and good for the pro?

In blackjack, a 10-value card could either be a 10, Jack, Queen, or King.  A pair of 10s, therefore, could be composed of any two ten-value cards such as:

PLAYING OPTIONS FOR PAIR OF 10S

There are only two viable playing options when you are dealt a pair of 10s:

Some land-based and online casinos allow players to resplit up to a maximum of three or four hands; therefore, if a player were to split 10s and draw another 10 to either split hand, he would have the option to split again to create three (or four) hands, each one starting with a 10.

When playing live blackjack against the dealer, most casual players split 10s when he has a weak upcard like a 5 or 6 (although I have seen many players during my career split 10s no matter what the dealer shows). Their logic for splitting on the dealer’s 5 or 6 goes something like this: “The dealer has a weak card and I’ve got a good chance to make two good hands starting with a 10 so why not split and double my winnings.” Oh, really.

Let’s look at your expected value, or the average amount you would win per hand when you stand on your 10s compared to what you win when you split against the dealer’s upcard of 5. (Note: The following analysis is based on a typical six-deck game, where the dealer stands on soft 17.)

This means that for an original wager of, say, $10, after 100 hands this is what you would net on average:

The above analysis shows that when you stand on a pair of 10s vs. splitting them against a dealer 5 upcard, you figure to win $140 more when you stand vs. when you split.

Note: A similar analysis can be done for any dealer upcard and any mix of playing rules and number of decks of cards being used and you’ll always arrive at the same result: for a basic strategy player who is not card counting, standing on a pair of 10s is always a more profitable play than splitting. Also, keep this in mind: Since splitting 10s is a bad strategy, then resplitting 10s is an even worse strategy, so never do it.

WHEN TO SPLIT 10S

There are two instances where splitting 10s should be considered. The first occurs when there is an excess of 10s in the unplayed cards making it more likely that you will draw a 10-value card to each split 10 giving you two hands of 20.

The only way you would know if the unplayed cards are rich in 10s is by card counting. For example, card counters who use the popular Hi-Lo card-counting system will split tens vs. a dealer 5 upcard when the true count (or count per deck) is +5 or greater.

However, even though the latter is the correct mathematical play, splitting 10s in a land-based casino will attract suspicion from casino personnel that you might be a card counter. Therefore, even though it is the correct play, it is not wise to consistently split 10s in a single session.

The second instance where splitting 10s could be considered occurs in the last hand of blackjack tournaments where the goal is to have more chips than your fellow table players after a set number of hands are played.  For example, if it’s the last round and winning the hand with the chips that you’ve bet will still not be enough to overtake the leader, but betting twice as much will do the job, then a player should consider splitting the 10s.

What follows is an example of how this worked for me once in a tournament.

The above scenario is an example of why splitting 10s in tournaments is sometimes a smart play, especially when you need to bet more money to beat an opponent. You've got to remember, however, to split your bankroll in half before you bet, otherwise, you won't be able to pair split. (Unlike doubling down, you can't pair split for less.)

For more information on land-based and online blackjack playing strategies, including playing and betting strategies in tournaments, consult Chapter 10 and Chapter 15 in the Ultimate Blackjack Strategy Guide.
Blackjack School
Blackjack Tips
About the Author
By
Henry Tamburin Ph.D