One of the most valuable resources for researching blackjack is appendix 4 at the Wizard of Odds website.  In that appendix, Mike Shackleford gives the combinatorial analysis (CA) for the version of six-deck blackjack most commonly played by high-rollers. I used Shackleford’s work in my analysis of Don Johnson’s method for beating loss rebates (see this post). Recently, a reader of this blog asked if I knew a program that gave the CA for other rule sets. I asked Mike how he did his CA and he told me that his results in Appendix 4 were obtained by simulation. In other words, he ran a bunch of rounds, recorded the number of times each event occurred, imported that data into a spread sheet, and completed his analysis from there. In this post, I present CA by simulation for six other blackjack rule sets.

In what follows, I use the following abbreviations:

The results I present below were obtained by simulations of four billion (4,000,000,000) hands of blackjack each. 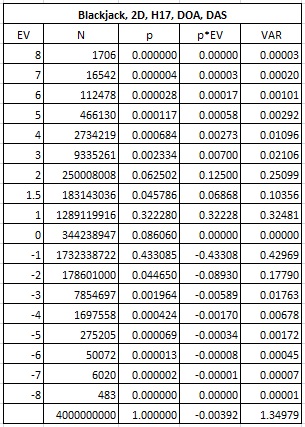 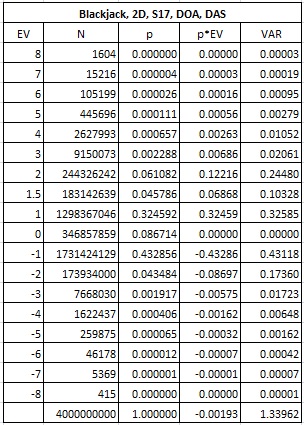 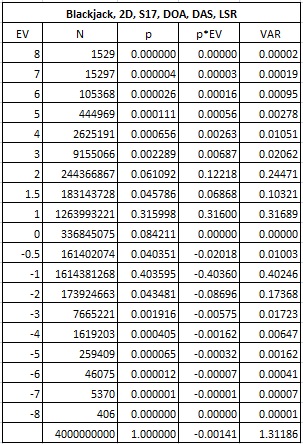 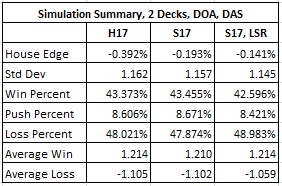 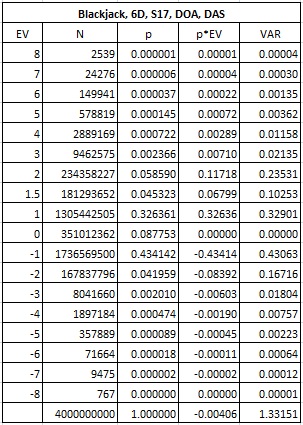 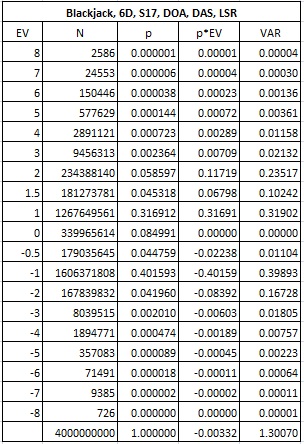 Spread Sheet
It may be tough for the reader to use the results given above when they appear in an image file. Transcribing those results is an unnecessary burden. For that reason, I prepared a spread sheet that can be downloaded that contains all the results presented above.

I hereby give permission for unlimited and unrestricted use of this spreadsheet:

Blackjack_CA_by_Sim
Blackjack Tips
About the Author
By
Eliot Jacobson Ph.D.