In this post, I wrote about exploiting advanced knowledge of the specific location of a Ten or Ace in the shoe. Among the many ways an AP can know that an Ace or Ten will be dealt is when the bottom card is exposed to a skilled cutter. The cutter places the Ace/Ten at a known depth, allowing the premium card to be steered to an awaiting big player. This strategy begs a question: what about the times that the bottom card is something other than a Ten or Ace? Should those rounds go to waste?

This post was motivated by an astute reader who emailed me asking if it really mattered what card was on the bottom of the deck. In other words, he wondered if every exposed bottom card could be exploited. His question reminded me of card location plays in baccarat (see this post). The reader said that he didn’t know anyone who had ever done this. Me neither. For this reason, most of what I write in this post is pure speculation. I will go one step further: aside from the mathematical results, this post is mostly fantasy.

As a fantasy-example, suppose a skilled cutter working solo on a single-deck game (H17, DOA, BJ 6/5, H/A = 1.5832%) sees a five on the bottom of the deck when he is offered the cut. He can certainly cut that card out of play and move the edge microscopically his way. But, if the AP cuts that five to a position where it will definitely be dealt, he may have the opportunity to wager knowing that the dealer will receive that five as one of his first two cards. In this case, the cutter will have a huge edge of 21.91% over the house on that hand, just by playing basic strategy. Of course, if the AP receives the five as one of his first two cards, he will be at a similar disadvantage (19.78%). But, the AP can wager accordingly, betting high when he knows the dealer will get the five, and making small wagers when he knows the five will be dealt to him.

The example of the “five” above holds for every card in the deck. By skillfully cutting an exposed card so that it is always in play, the AP will know the edge when the card is due to be dealt. If the cutter has the edge over the house based on that card’s position, he bets big, otherwise he bets small.

There are several reasons that the skilled cutter will target single-deck blackjack, even though most games pay only 6-to-5 on blackjack. First, the AP wants a game where as few rounds as possible are dealt between shuffles; he wants the opportunity to cut as often as possible. Moreover, there are far more unskilled “break-in” dealers at single-deck 6/5 tables with sloppy procedure. The games are not carefully watched. They are not taken seriously. The AP knows that the house views him as a sucker. Even if he is scrutinized for card counting, his large wagers will not be correlated with the true count.

The table below gives the edges for each known card in the common single-deck game with rules: H17, DOA, BJ 6/5. The percentages given for the dealer assume that the AP will not use hole-card strategy when the known card becomes the dealer’s hole-card. 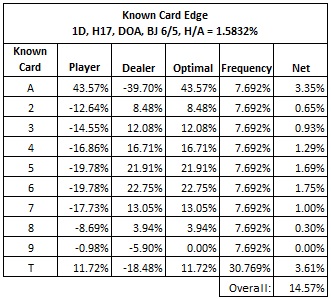 Note in particular that a nine has negative EV for the AP, regardless of its destination.

My fantasy-strategy to beat single-deck blackjack with a known card is trivial. Always cut the known-card into play. Always use single-deck basic strategy. If the known card is due to be dealt and the card’s destination yields positive EV for the AP, make a large bet, otherwise make a small bet.

For example, suppose the AP makes a $100 flat bet, but when the known card is due to be dealt to a position that yields positive EV, he wagers $500. The AP doesn’t vary from basic strategy or otherwise attempt to steer the known card.

The AP makes $500 wagers in the following situations:

The AP makes $100 wagers in the following situations:

With this simple strategy, the AP expects to earn $27.75 in profit every time the known card is due as an initial card to either his hand or the dealer’s hand. The AP will wager $500 on 46.15% of those hands and $100 on the other 53.85% of the hands. This simple strategy gives the AP an average edge of 9.68% over the house. And who will ever suspect him?

It is easy to see that the AP can do far better. Any of the following will enhance the AP’s earning power:

The skilled cutter can also target two-deck and six-deck games. However, the more decks that are used, the less frequently the cutter gets the opportunity to exploit the known card information. In my fantasy, the AP lurks at high-limit single-deck 6/5 tables. Several years ago no such games existed. Now, such games populate the Las Vegas strip.

Here is my game protection advice, and this is not fantasy: your single-deck 6/5 blackjack games are among your greatest liabilities. Take them seriously.