The Effect of Cut Card Placement on Blackjack Profit

The methods used to protect against blackjack card counters are among the most costly managerial decisions many casinos make. Contrary to popular belief, there is not an army of card counters waiting to pounce at the first opportunity. In this day of multiple table game options and hundreds of casinos, the few skilled APs who do target blackjack are highly unlikely to harm a specific casino's bottom line.  The poorly understood policies put in place cost far more than the casino stands to lose to the few counters who do stop by. This post concerns one common tool for protecting against counters in shoe games: the placement of the cut card. I created a spread sheet to demonstrate the cost of the cut card.

You should immediately download it and give it a try (then buy my book for giving you something so valuable for free! Really, this spreadsheet can save your casino thousands of $$$ or more!):

The user can input the following data into the sheet:

With these inputs, the spread sheet gives output for cut card placements from 1/2 deck to 2 decks, incremented by 1/4 decks. The most critical information for understanding the cost of cut-card placement is given in the final three columns. These columns give the cost per hour, per day and per year for having a cut card placed beyond the 1/2 deck location.

Of course, in practice there are other variables. Slow dealers, long shuffles, dead tables, frequent fills and other factors also influence these results. Nevertheless, the point is made. Cutting off more than 1/2 deck has a significant cost.

For example, consider a six deck shoe game with shuffle time of 180 seconds (three minutes), an average of $50 wagered per round, an effective house edge of 1.50% and an average of 3 players on the table.  Assume that the time per dealer/player hand is 10 seconds. Then the yearly cost of cutting off 2 decks instead of 1/2 deck is $78,321 per table. What are the chances that card counters are going to beat that table out of that amount? If the casino has an average of six tables open, the cost is over $450,000 per year. In the highly unlikely event that card counters beat the casino for $50,000, the casino is still ahead by over $400,000.

It just makes no sense whatsoever to place the cut card deeper than 1/2 deck.

Here is the spread sheet illustrating the computation: 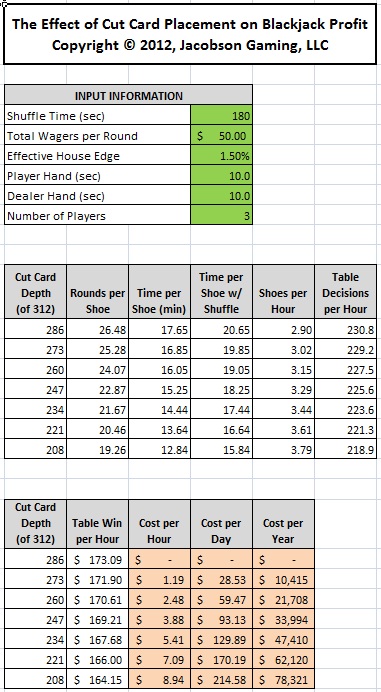 The obsession with protecting blackjack against card counters costs far more than card counters will ever win. Casinos should use a fraction of the profit they will gain by placing the cut card at 1/2 deck and invest in education for their staff. Bring in an expert to train staff on card counting. Along the way, staff can be educated on a host of  far more costly forms of advantage play. The light of game protection is focused on blackjack card counters while the real action is taking place at the dimly lit table one over.

Many thanks to Bill Zender for his review of my spread sheet and helpful comments. In particular, separating out the times for the player and dealer decisions.