The two most challenging tasks for a card counter are to keep a running count as the cards are dealt and to convert the running count to a true count at the start of each round. For games where no strategic decisions are made after the cards are dealt (like baccarat and side bets), the main purpose of the true count is to decide whether a wager should be placed.  If the true count exceeds the trigger count, the AP makes the wager; otherwise he sits on his hands. A secondary purpose for the underfunded AP is to use the true count to help him determine the size of his wager. This is known as using the “Kelly Criterion.”

For blackjack and its variants (e.g. Blackjack Switch, Spanish 21), the true count also serves a strategic purpose: the AP has mid-hand decisions to make (stand, hit, double, split, surrender) that vary based on the true count. For example, in blackjack:

With a high true count (larger bet), the AP will adjust his play from basic strategy by:

With a negative count (minimum bet), the AP will adjust his play from basic strategy by:

Each strategic play has an “index.” This is a number that tells the AP the correct point at which to diverge from basic strategy.  In “Professional Blackjack” by Stanford Wong, Table A-1 (page 255), Wong gives these indices for single-deck blackjack (H17) using the Hi-Lo card counting system. Table A-1 gives a total of 189 different indices, including plays like the following:

If the AP finds a game where he can “double after split” (DAS), he has an additional 55 indices to learn. If the AP decides he wants to play a shoe game (or double-deck) rather than single-deck, there are more indices to learn. This amount of memorization, let alone gaining the skills needed to use it in practice, is daunting. However, there are two approaches an AP can take to reduce the task to a subset of these indices.

Method #1: One way to reduce the memorization task is to create artificial boundaries. For example, the counter may learn every index between -5 and +10. The reasoning for this may be something like:

Method #2: Another way to limit the amount of memorization is to understand that there is a natural ordering of the indices by the monetary value of each. Some are more important to learn than others. In this approach, the card counter should start with the most valuable index (which happens to be the ubiquitous side bet known as "Insurance") and continue down the list, learning as many as he can. Such a complete list has never been published (as far as I know).

I used method #1 in my studies. When I was an amateur card counter, over time I memorized about 110 indices and another 25 “changes” that applied when I went from single-deck to shoe games, with values ranging from -5 to +10. I placed these indices on flash cards and practiced often, adding more indices whenever I was ready. I used to cycle through these flash cards several times while driving from Santa Barbara to Las Vegas (distracted driving before the era of text messages) as a last-minute refresher. I would also practice them overnight in my hotel room.

Method #2 requires a non-trivial research project in order to rank the profitability of the indices and strategy variations. This is exactly what Donald Schlesinger partially accomplished when he published his article “The Illustrious 18” that appeared for the first time in the September 1986 issue of Arnold Snyder’s magazine “Blackjack Forum.” Schlesinger published the top 18 index plays in rank order. 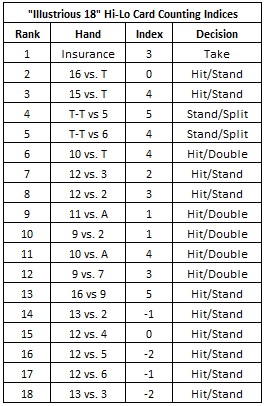 “I’m proud of how oft-quoted the concept has become, and I’m grateful for the impact that the discovery has had on an entire generation of card counters. Pay attention: what follows is important!”

Schlesinger goes on to say:

If you are a practicing Hi-Lo player and have diligently committed to memory 150 to 200 index numbers, you may be interested to learn that for this particular game and style of play, you might as well throw 90% of your numbers away and keep just the “Illustrious 18.” On the other hand, if you have just mastered true count and were about to embark upon your study of the index-number matrix, I have saved you a great deal of work. Learn the plays in the chart and forget about the rest. You can trust me that you won’t be missing much.

Donald Schlesinger was well on his way towards creating a vital body of research when he published the Illustrious 18. A complete list would have allowed each individual to measure what he wanted for his unique circumstance. Any time a counter wanted more, it would be readily available. Rather than saying "trust me," Schlesinger could have said, "I trust you."

When I was counting cards, it never occurred to me that less knowledge might be a good thing. Although I was not a professional AP, I took card counting seriously. To me, mastering index plays was part of beating the game. As an academic, I cannot see why anyone would want less knowledge when they can have more. Giving up knowledge is giving up opportunity and seems antithetical to what being an AP is all about.

In Beyond Counting, Exhibit CAA, James Grosjean refers to the Illustrious 18 as the "Hobbyist's 18." Grosjean stated (page 388):

“Blackjack Attack” is subtitled “Playing the Pros’ Way,” and yet I doubt you can find a professional card counter on earth who uses only 18 indices. I am not primarily a counter, and even I know way more indices than that.

When Schlesinger wrote: "I’m grateful for the impact that the discovery has had on an entire generation of card counters," he may not have realized that the greatest beneficiary of his work may be the casino industry. By encouraging card counters to play a weaker game, he inadvertently has helped keep profits on the casino's side of the table. Grosjean understood this, and could hardly constrain his disbelief, when he wrote (Beyond Counting, Exhibit CAA, page 387):

" ... the counter cannot afford to just 'throw away' indices and money. Let's try to improve our perspective. In grade school, if you scored 100 on a quiz, your parents were satisfied. What if you came home and told them you got a 90, or a 75? In my high school, 75 was nearly a failing grade, and 90 was only a B. Some of us probably would have run away from home before showing our parents a quiz score of 85 ..."

My complaint here is not with the Illustrious 18, it is excellent work. Nor am I trying to help would-be card counters improve their game. The problem I have with the Illustrious 18 is its secondary message: it is ("trust me") anti-intellectual. While there may be practical limitations for any given individual to learn a substantial quantity of information (not everyone has a great memory), such limitations are not acceptable as an educational strategy. Students should always be offered more than they can readily absorb. In every aspect of life, we should always be reaching for everything we can get. Everyone who teaches us along the way should be helping us become something more, not something less.

The quest for more knowledge is not just about the Illustrious 18; it’s about everything in life. Whether you are an AP, in game protection, or do something else in your professional life, learn more. Pick up a hobby and learn more about that too. Learn more about something today. Learn more every chance you get.

[Added 03.06.2014]. The following is an excerpt from a response by Don Schlesinger (03.05) to this blog post. Schlesinger's response appeared in this thread on WizardOfVegas.com.

4. Just one man's opinion: Eliot's article is next-to-useless. It illustrates and "proves" absolutely nothing. And, if it was an attempt to discredit the I18, it fails miserably, as did Grosjean in the abject nonsense he wrote in Exhibit CAA. If you want to know their motives for writing such drivel, you'll have to ask them. I might speculate that petty jealousy and a fierce desire to discredit another man's work are the main driving forces, but I'm not going to waste any more of my time or yours on the topic.

... he is pretty much a laughing-stock among serious players.

What I bitterly resent is: a) anyone who purposely or maliciously distorts those facts, either for his own aggrandizement, or to attack me; or b) anyone who accuses me of suggesting that any player should or shouldn't use any particular set of indices.

Norm Wattenberger is arguably the most well-respected blackjack programmer working today. His product Casino Verite, along with several other blackjack simulators, is the main software used by advantage players to research blackjack card counting. Norm hosts the website www.blackjacktheforum.com. One of the recent threads on his site (see this thread) mentions this post. Norm offered great insight into the problem of generating additional indices in order of importance when he wrote:

I have a problem with the article. We all know, now, that there are certain indices that are more important and their gain is dramatically more important than the remaining indices, particularly as decks increase. The suggestion that the study wasn't complete bothers me. Fact is, once you get past the first 24, the next indices become more and more difficult to determine, and more and more dependent on the rules, decks, strategy, etc. I spent some time years back looking at a method of going beyond 18 given a particular set of circumstances. My conclusion was that it was a pointless exercise and that you should go with your gut and comfort level should you wish to expand your list ... Determining the Ill18 in 1986 was an enormous amount of work. When you get much past that, it's very difficult even today given the variations in circumstances.

The difference between Norm Wattenberger's response and that of Don Schlesinger given above should be noted. Vitriolic attacks and name calling do little to further intellectual debate. From my side, I find Wattenberger's comments to be extraordinarily illuminating.