Card Counting the "Bonus" Side Bet in Over/Under

Over/Under (O/U) is a new table game that has recently been approved and is starting to get domestic placements. There has been considerable discussion on advantage play message boards about card counting this game and an associated side bet (see  this thread at wizardofvegas.com and this thread at blackjacktheforum.com).

In this post I am going to ignore the main game and its rules and focus on the O/U side bet referred to as the "Bonus" bet. One reason to ignore the main game (for now) is that this side bet can be used whenever three cards are dealt in the normal course of a casino game. For example, this side bet could be used with ordinary blackjack considering the player's two-card hand and the dealer's up-card.

According to the available documentation provided by the game's inventor (Joseph Shipman's Report and Donald Catlin's Report) the game of O/U is dealt from a shoe consisting of four, six or eight decks of ordinary playing cards. This analysis considers only the six-deck case. If players correctly follow basic strategy for the main game of O/U, then each hand requires exactly three cards for each player. The Bonus bet is a side bet that is based on the sum total value of those three cards, where:

In other words, the hand totals are counted as they are in blackjack, with Aces always counting 11.

In summary, the player is dealt three cards. He adds the value of his three cards and gets a total. The Bonus bet wins if this total is either under 13 or over 26. Specifically:

The following table gives the combinatorial analysis for the Bonus side bet when O/U is dealt from a six-deck shoe: 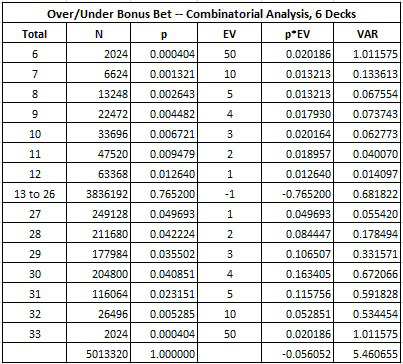 In beating this side bet by card counting, it is important to note that it is much more likely that this side bet will be won by a high hand than by a low hand. In fact, 83.95% of all winning hands will be high hands and only 16.05% of the winning hands will be low hands. Intuitively it follows that a card counting system should be focused on exploiting an abundance of the high cards (T, J, Q, K, A).

The following table gives the EORs and a counting system for the O/U Bonus bet: 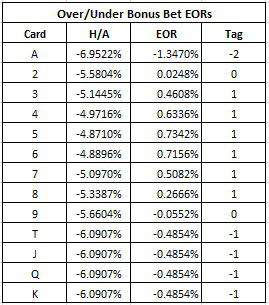 I note that in Joseph Shipman's Report, he states: "For the Bonus game, the best count weights the middle cards positively and the high and low cards negatively." Shipman gives no mathematical argument for this statement in his report nor does he provide an actual counting system. I obviously disagree with Shipman. As the EORs above make clear, low cards should either be neutral or positive.

At any rate, the card counting system given above puts a premium on cards that lead to hands with high totals. The betting correlation for this system is not especially good at 0.975. However, the simplicity of this count makes it feasible for even a recreational counter to use.

To evaluate the effectiveness of card counting, I considered a six-deck shoe with the cut card placed at 260 cards (one deck from the end). Because each round uses exactly 3 cards, after the first card is burned, the rounds will start at card 2, 5, 8, ... , 257, 260 (the cut card is placed right after the 260-th card).  Consequently, there will be exactly 87 rounds dealt per shoe.

The following table gives the results for a simulation of one hundred million (100,000,000) six-deck shoes with the cut card placed at 260 cards, card counting the O/U Bonus bet using the system above: 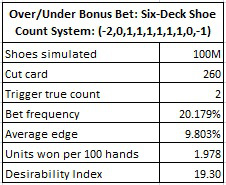 A win rate of 1.98 units per 100 hands indicates a high vulnerability to card counting. My information is that the maximum bet on allowed on this side bet is currently set at $25. That may be enough to deter card counting this side bet by itself (the main game may also have issues).  On the other hand, that's a pretty hefty win-rate. Card counters have been known to play for less.