Recently I became aware of a very unusual baccarat promotion when details about it were posted on the Wizard of Vegas website (see this thread). What was especially odd was that the post was made by a well-known high-level advantage player (who goes by the moniker ssho88). This AP was seeking confirmation of computational results made by a member of his team. In fact, he specifically asked for me to double-check his teammate's work. Naturally, I agreed. As long as the AP understands that my work will be posted in a public forum, I have no problem with such requests. I can only surmise that by the time this post is published, his team will have completed their play and will be several hundred thousand dollars richer and many miles away.

The way the promotion works is as follows. The player buys $60,000 in ordinary chips. He is then given a bonus of $30,000 additional chips. This sounds great, but there's a catch. The player can never cash out these chips. He can only cash out any money he wins in excess of $90,000. But, the player is welcome to cash out this excess as often as he wishes. That is, every time the player's bankroll exceeds $90,000, he can cash out the difference (currentBankroll - $90,000) so that his bankroll once again becomes $90,000. The player plays until he loses his entire $90,000 initial bankroll. Losing the entire $90,000 is inevitable; baccarat wagers have a house edge, after all.

Sometimes the AP will just start losing and never get above $90,000. In this case he will lose his original $60,000 stake, and too bad for the AP. But, gambling is a random walk and it is quite likely the AP will be ahead (more than $90,000) at some point. Because the AP is given an extra $30,000 to cushion the negative swings, he is able to generate positive expected value if he can make large enough wagers to generate enough volatility. In the case of this promotion, ssho88 stated that the table limits allowed wagers up to $10,000.

It follows that there are two strategies that an AP will take against this promotion that a typical player may not do. These are:

The following table shows the statistical results for 16 different simulations I ran. I assumed the AP used the strategy of always cashing out any winnings above the original $90,000 (if any) after each hand. 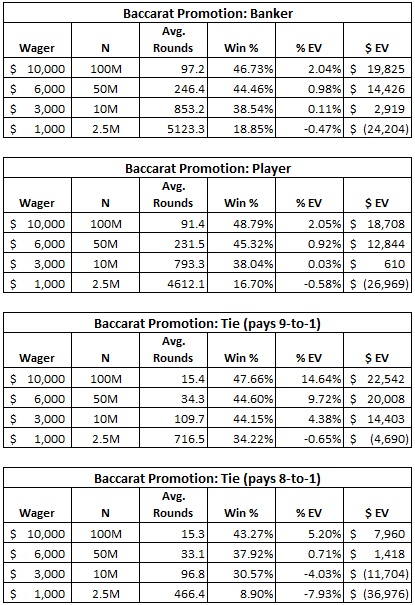 For example, consider the AP who wagers $10,000 on Banker each hand:

It should come as no surprise that the AP earns more by wagering more. Likewise, because the house edge on Banker is lower than Player, the AP earns more by wagering on Banker than Player for a fixed wager size. What does come as a surprise (at least to me) is that in the case that the Tie bet pays 9-to-1 (as it does in some international jurisdictions), then the win-rate on the Tie bet against this promotion exceeds both the Banker and Player bet.

By reference to the table above, here are the statistics for playing against this promotion by making $10,000 wagers on the Tie bet, given that the Tie bet pays 9-to-1: