Car giveaways are among the most popular promotions driving repeat traffic in local markets. Allowing players to earn tickets over a period of a month, with a sports car or truck prominently displayed inside the casino, results in excitement building to a climax as the date draws near. Ideally, by having the drawing on a Sunday evening, the last weekend will have the casino filled to capacity as players frantically try to earn every last ticket. A few cash giveaways during the final days and it will be tough to find an open slot or table game anywhere.

And then there is Stations Casino's car giveaway that took place in February, 2011: 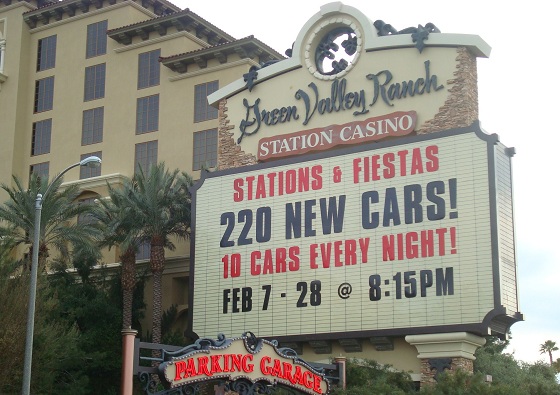 The "We Love Locals" advertising blitz was in high gear when this promotion took place. Because this promotion required the player to be in the casino at some point during the day to be eligible to win the car that night, this promotion was designed to get locals to come to the casino every day to play.

Let's take a detour for some of the mathematics of this promotion.

I will take them at their word that this promotion amounts to giving away a total of about five million dollars in prizes (see picture below). Add to that taxes and marketing expenses and the overall expenditure may be more like six million. In that case, each of the 10 casinos will have to earn $27,300 in incremental income per day to have this promotion pay for itself.

The "locals" demographic has a fairly fixed gambling budget. The average local has a budget of about $40 per trip (in t-win) for their gaming.  There are some higher-level players, but there are even more players with a smaller budget. Given the high unemployment rate, the housing crash, and seniors living on fixed incomes, there is almost no room for an incremental increase in gaming budget for most locals.

The incremental play will likely come from several sources. Some locals will incrementally play more. Some may defect from their play at other casinos. Some new local players who didn't previously gamble may take a chance. Some additional tourists will venture out to the remote Stations locations. And some APs will play.

Playing a slot with a 7% hold, at 400 pulls per hour, a $40-Theo budget gives about 90 minutes of play. It will require an extra 680 visits per day at $40 per visit incrementally above the normal visitation rate to have this promotion pay for itself. Thus we should see not only the typical play going on, but Stations is counting on 680 additional visits each lasting about 90 minutes.

This seems reasonable. The casino should be packed every day with players, after all, a car is being given away. The more you play, the better chance you can win the car.  Locals want to win a car.

I snapped this photograph on February 27, 2011, at about 5:30 PM. This is just a couple of hours before the drawing, after work, on the second-to-last day of the promotion. The excitement should be nearing a climax. Every seat should be filled with players trying to get one of the last few cars. That's not quite what happened. Do you see 680 extra players? 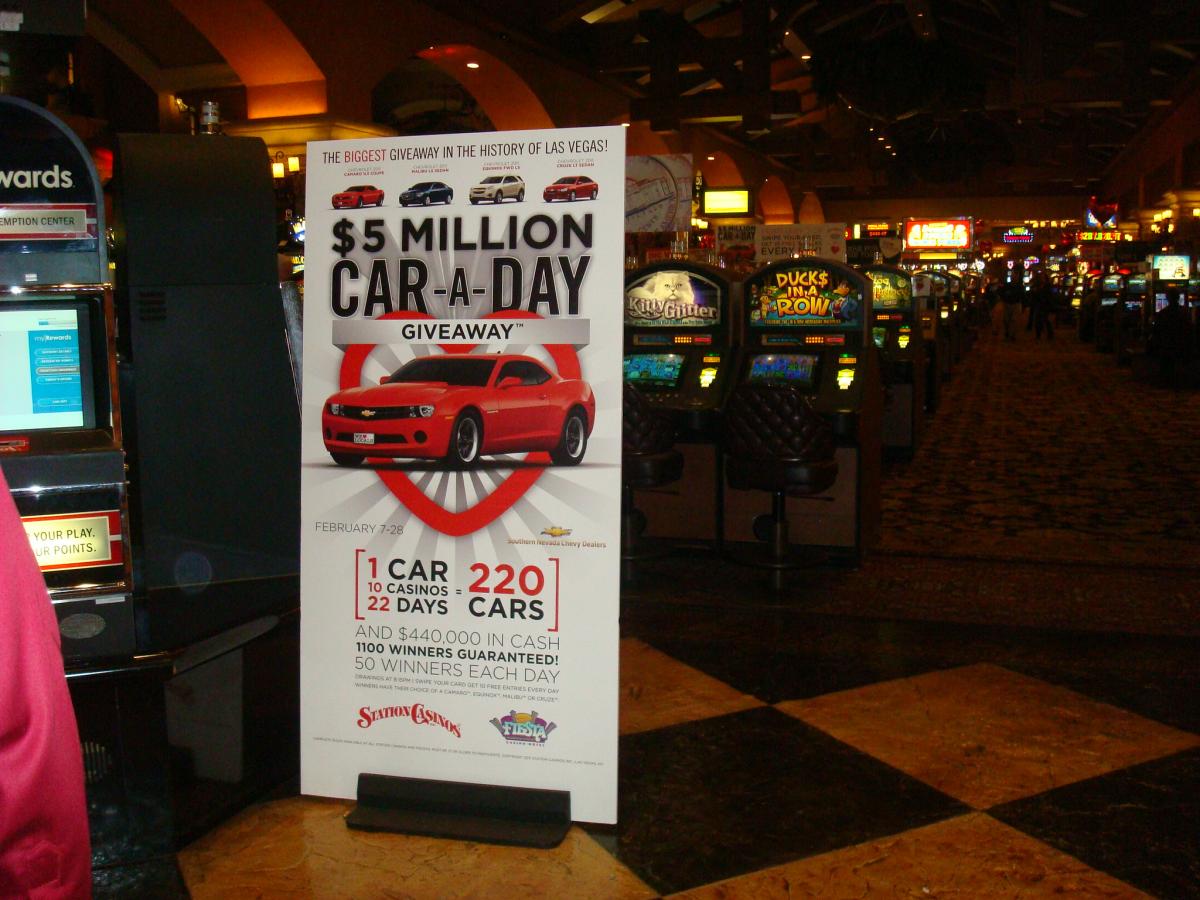 This picture was taken at Green Valley Ranch, which along with Red Rock, is the most high-end of the Station Casinos. If any one of their casinos should show the incremental income to pay for this promotion, this casino should be the one.

Here is another picture. Where are the 680? 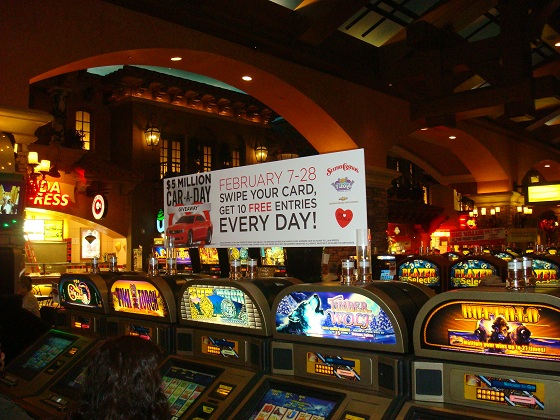 On to APs, which is the topic at hand for this blog. It is my understanding that the tickets were "virtual" for this drawing.  You earned your tickets by swiping your player's card into a kiosk. The number of virtual tickets earned was proportional to your play for that day and your historic play.
What that meant is that the higher your Theo (t-win) the more virtual tickets you earned. Because of the lack of low-level play, a few high rollers could easily stuff the virtual ballot box with a few hours of high limit play. I cannot state with certainty that this actually happened, but a source told me this actually happened. APs made off with a bunch of these cars. And all of these APs, whether they won a car or not, earned great comps.

It may turn out that this promotion worked fine for Stations Casino and that I am way out of line. If that is the case, I welcome a correction from Stations if they wish to respond.  A few months ago, in early 2012, they repeated this promotion. This time only 200 cars were given away. Looking at the picture below, just maybe, it's the car that's part of the problem. Once again there is an evident shortage of patrons. 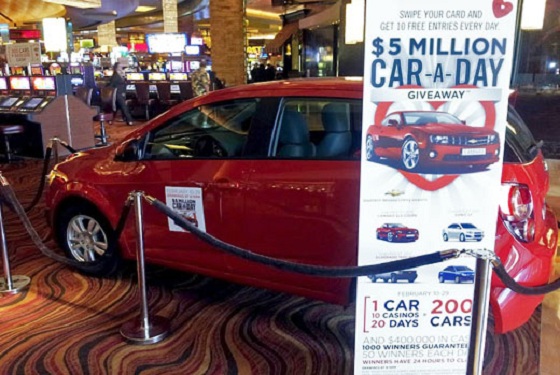 I understand that the image below does not directly apply to these promotions. Indeed, the bankruptcy was before the 2011 and 2012 car giveaways. However, I cannot help but notice the irony. 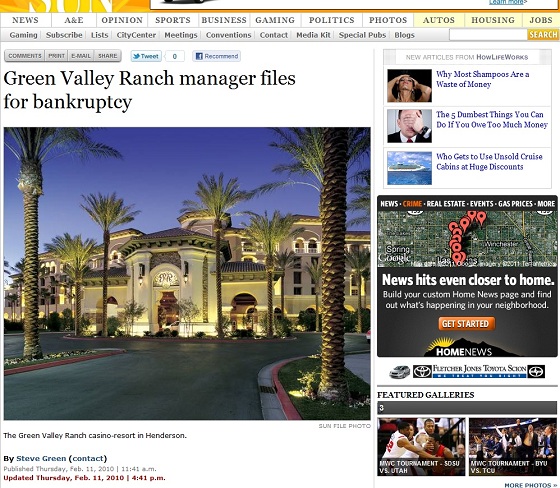