Here is the Third Loss Rebate Theorem (click on the image to make it larger): 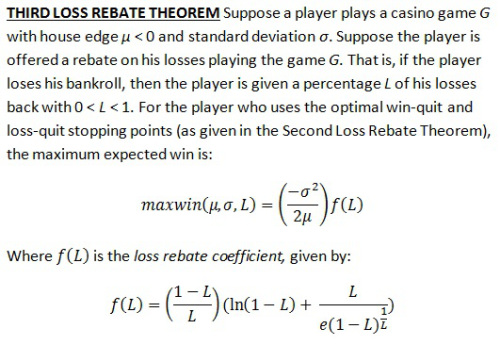 The denominator of the last term in the loss rebate coefficient kind of freaks me out. That is not "e" raised to a power. That is just "e" multiplied by that bizarre looking term (1-L)^(1/L). But this last term has its own beauty.

Here is my derivation of this result: LRT3_Proof

LRT3 is incredibly easy to use in practice. The user simply looks up the house edge and standard deviation of the game in question. For a given loss rebate amount L, the loss rebate coefficient for L can be computed with a simple spread sheet computation. LRT3 then outputs the number of units the AP will win (on average) if he follows an optimal quit-win quit-loss strategy.

Before I give some examples, I want to stress one point. We see that the maximum expected win is directly proportional to the variance (standard deviation squared) of the game, and inversely proportional to the edge. You often hear APs say that increasing variance improves the potential return by exploiting a loss rebate. This formula makes it clear. Double the standard deviation and you multiply the win-rate by 4. Double the house edge and you cut the win-rate in half.

One other quick note. A bit of scratch work will show you that maxwin > 0, no matter the values of the variables substituted into it. In other words, a corollary of LRT3 is that every unrestricted loss rebate promotion on every casino game can be beaten.

The following table gives the loss rebate coefficients for some of the most common loss rebate percentages:

Here are a couple of examples.

Example 1. Don Johnson. In his case:

Looking up 0.20 on the table above, the loss rebate coefficient is 0.0055690.  It follows that the maximum expected win for Don Johnson was:

Looking up 0.12 on the table above, the loss rebate coefficient is 0.0019164.  It follows that the maximum expected win for exploiting a 12% loss rebate by playing straight up bets on single-0 roulette is: 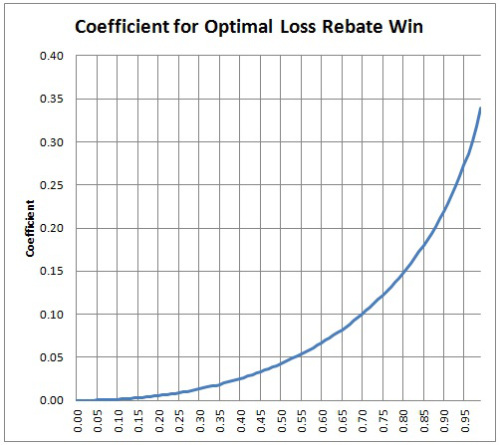 As of this moment, I don’t know what else there is to do to pursue this direction of inquiry for the Loss Rebate problem.  I will be taking my dog for a walk later on today, so who knows what may come next. [Note. I took the dog for a walk. No new ideas. Bad dog!]