How To Play Your 16 Against a Dealer's 10 Upcard 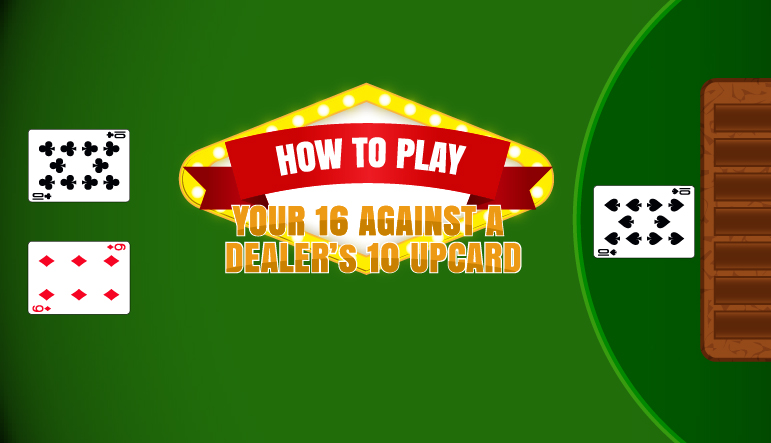 How you play this hand depends on the playing rules. If the casino allows you to surrender your hand, you should surrender the 10-6 and 9-7 against a dealer’s 10 upcard rather than hit or stand. (The surrender rule means you can forfeit playing your hand and automatically lose half your wager.) Although you automatically lose 50% of your wager when you surrender, you would lose greater than 50%, on average, if you were to hit or stand, which is why surrender is the better play.

What if the casino rules don’t allow surrender?  Then hitting becomes a slightly better option than standing on a two-card 16.

For skeptics that don’t believe surrender is better than hitting (which in turn is better than standing), look at the data in the following table. It shows the expectation (in percent) of surrendering, hitting, and standing a 10-6 against a 10 in a six-deck game where the dealer stands on soft 17.

For example, if you wagered $25 and were dealt a 10-6 against a dealer 10, these would be your expected outcomes:

Therefore, the math says that you will lose money in the long run no matter how you play the hand but you’ll lose less if you surrender (and if surrender is not available, hitting is less costly than standing).

Suppose you have a 16 composed of these cards:

This hard 16 hand consists of three cards (4-8-4). You can’t surrender because once you draw a third card, the surrender option is no longer available. The best strategy for a multi-card 16 is, therefore, to stand.

The reason standing is slightly better than hitting is that you’ve removed two small cards from the decks (the two 4s in your hand), making it more likely you would bust if you hit.  (You have also removed two cards that you would have liked to see the dealer have as his down card.) In this case, the percentages are close between standing and hitting, but the slight edge is in favor of standing.

This 16 consists of a pair of 8s, which brings into play the option of splitting. Your choice is, therefore, to surrender, hit, stand, or split. Your best play is to split.

I realize that many players do not like to split 8s against a strong dealer’s upcard like 10. However, the reality of this hand is this:

You will less money in the long run when you split the 8s than if you stood or hit with 16 or surrendered the 8s. Yes, sometimes you will split the 8s, draw 10s to each split 8 for two pat 18s, and lose to a dealer 20. (Been there, done that.) It’s a nerve racking decision to split but it’s the right play to make because in the long run you will lose less money by splitting than by any other playing option.

Note: By way of an example, the expectation percentage for splitting 8s in a six-deck game with S17, DAS, and splitting up to three hands is -47.4%, which is lower than surrendering, hitting, or standing.

Suppose you are a dealt a two-card 16 consisting of an Ace and 5.

This 16 is a soft 16, consisting of an ace counted as 11. You should never stand on a soft 16 because you can’t bust with a one-card draw. The correct way to play this hand against a dealer’s 10 is to hit until you reach hard 17, soft 19, or bust trying.

The next time you are dealt a dreaded 16 against a dealer’s strong 10 upcard, remember to do the following:

Blackjack School
About the Author
By
Henry Tamburin Ph.D