“Do you ever catch people trying to cheat?” As a croupier, I was asked that question every night, on my way home from work. After flagging a cab at four in the morning, the driver would ask if I’d had a good night out. When I told him I’d just finished work in a casino, it was fifty-fifty whether he’d ask me the most I’d ever seen someone win - or whether I’d seen anyone trying to cheat. 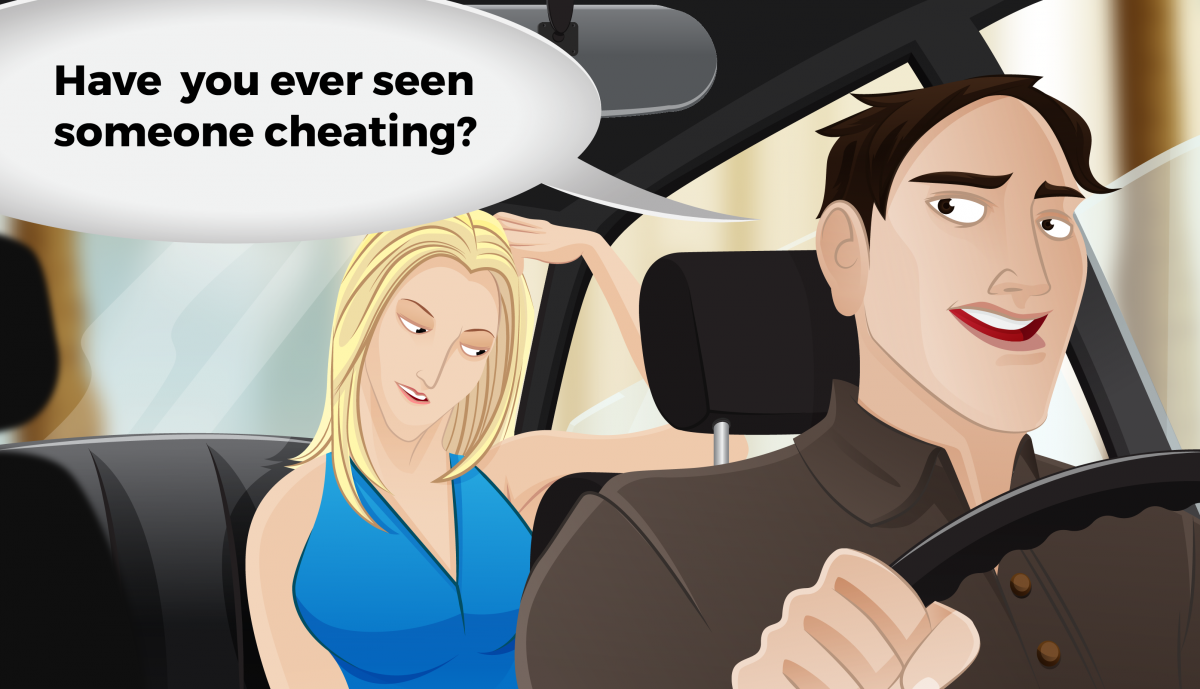 Actually, punters (gamblers) cheated constantly. Asking a dealer if they’ve ever seen a casino player cheating, is like asking a receptionist if they ever answer the phone. It’s like asking a barista if they’ve ever made a latte, or asking a builder if they ever work with bricks. Casino punters cheat – that’s what they do. And the anticlimactic truth is, catching someone at it really isn’t a big deal. Urban legend has it that cheating punters are taken round the back and given a kicking by security – but in reality, for big punters at least, the VIP treatment doesn’t waver.

I worked in London’s top Mayfair casinos, where punters are worth millions, so we definitely didn’t want their blood on our carpets – and nor did we want to lose their custom. Outside Mayfair, in London casinos with lower table minimums, the attitude wasn’t as lenient. My friend Tim explains, “if punters cheated, they’d get barred immediately. We had a manager who hated all the punters and he just went round barring people, left, right and centre: “YOU - GET OUT NOW!”” However, in Mayfair casinos, “You pretty much have to kill someone to get barred – and even then, it depends who it is!”

So Mayfair high rollers cheat with confidence – but not in the ways most people imagine. Marked cards, sleight of hand, and card counting tend to be the first things people think of when they imagine cheating - but in Mayfair, it isn’t as cunning or as complicated as this!

CLAIMING THEY PUT DOWN THE “WRONG CHIP”

On one of my first shifts in one of Mayfair's casinos, I dealt roulette to a horrible old man who’d been punting there for decades. He was playing £5 chips on the outside bets and when I hit number one, I went to pay his bet on the first column. At this point he told me, “oh, I didn’t mean to put a £5 chip there, I meant to put a £100 chip there.” But he wasn’t just making conversation – he actually wanted me to pay him as if he’d bet £100. With odds of 2-1 for a column, this would mean paying him £200, instead of £10. Ridiculous, right? But that’s what I was told to pay him. The club’s tendency to indulge high rollers meant that this guy was given similar treatment, even though he was betting pocket money in comparison. 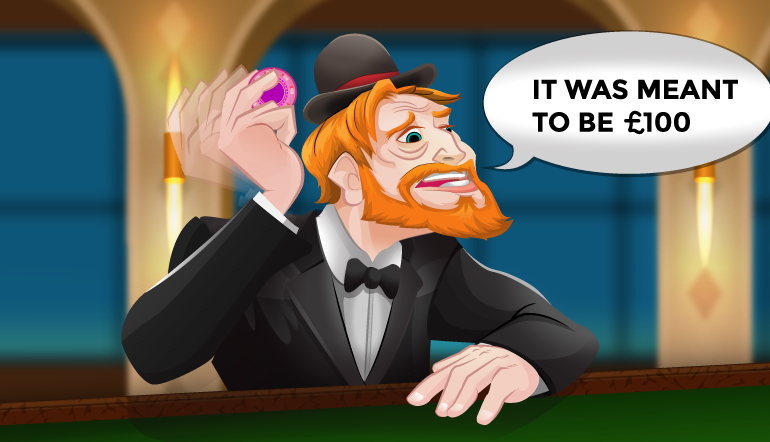 But don’t rock up to a casino in Mayfair and imagine they’ll throw money at you. This miserable old man had been coming in for longer than the management had been alive. He’d slipped through the membership net before computers were invented, and he’d spent every afternoon there ever since. That’s the sort of dedication you need to show before asking for upgrade on your payout!

CLAIMING THE CHIP IS IN THE “WRONG PLACE”

I was standing on roulette one day, when two old rogues decided to have a flutter. One of them, at least, had been drinking whisky all afternoon and by this point, at around seven o’clock in the evening, they were like mischievous kids who’d eaten a multi-pack of Smarties. I’d known them both for years, and they were actually among my favourite punters – but that didn’t mean they wouldn’t cheat on my roulette table. Throwing a few £1,000 chips on the layout, they told me to spin, and the ball dropped in number 32. They had a chip on the split of 32 and 35 - and with odds for a split at 17-1, this would pay £17,000. Nice, right? No – not when they could get odds of 35-1 for a straight up. As I dollied the number and cleared the layout, they started to exclaim, “oh no, it’s not meant to be a split, it’s meant to be straight up on 32!” They were after the £35,000 payout. 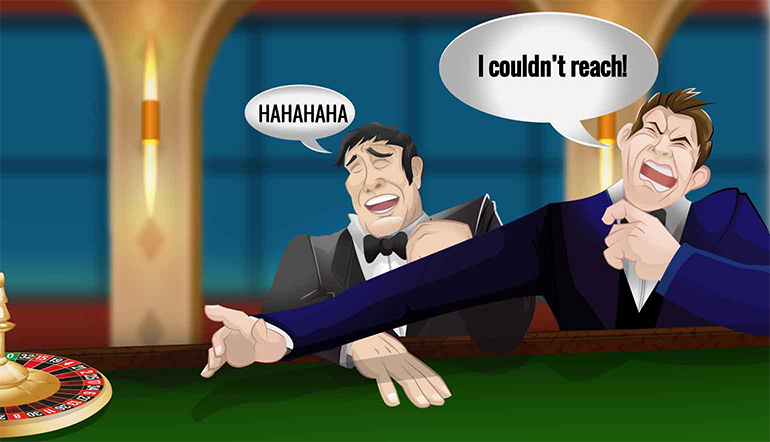 When chips are badly placed, it can be tricky to interpret whether they’re meant to be on the split or the straight up. But this chip was perfectly placed and the guys were literally laughing as one of them claimed, “I wanted it on 32 – I just couldn’t reach!” Guess what? We paid them - because both guys could easily buy in for up to £50K a day – more, if the mood took them. My friend Sophie, who also worked in Mayfair for years, sees it like this: “Management make that decision because they don’t want to upset them! And if we pay them, there’s a chance they’ll sit there and play it all back!”

CLAIMING THEY WOULD HAVE BET…

Most gamblers have a favourite number they’ll always play - and in Mayfair, that means you’re in trouble if you spin that number when the player isn’t at the table. They could be in the bar, or the toilet, or at another table, but if they’re in the building, they’ll want to get paid. It may sound like a ludicrous level of entitlement (it is) but I promise you, it happens!

My friend Ben recalls his most eye-rolling incident on roulette: “there was one punter who’d been playing 17, putting £300 straight up on the number. Then he went out of the room for about ten minutes, and three or four spins went by while he was gone.” When the punter returned, he found 17 had come in, and demanded to paid £86,000, on the grounds that he would have played £1,000 straight up on the number (£35K) and £1,000 on three of the splits (£51K). Ben was told to pay him, at which point, the punter said, “what about the bet?” Management pointed out the he hadn’t placed a bet, and the punter argued, “no but if I had bet, I would’ve got the bet back too.” Ben was then instructed to hand over a total of £90,000, to include the £4,000 bet that had never been placed. 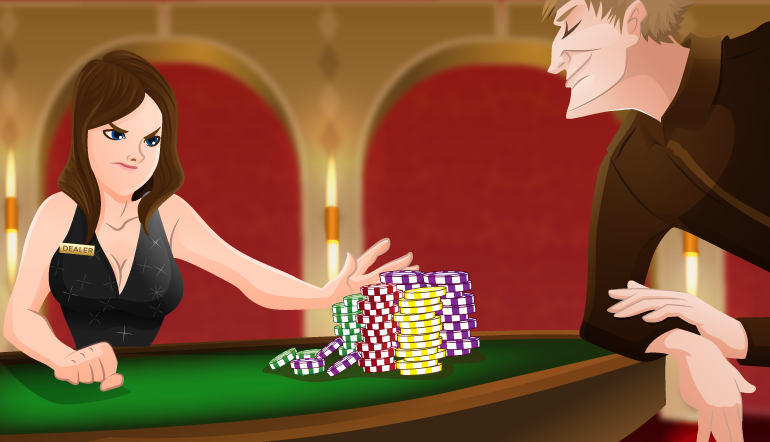 “I was disgusted,” says Ben, “he knew he was cheating - he just smiled.” Explaining the decision to pay him, Ben says, “it was because of his connections - he was an ambassador to an important Arabic country and he used to bring all the players in. He was good for at least £10-20 million pounds worth of business every year, so they were terrified of losing him!

Samantha Rea is a London based journalist and former croupier. She can be found tweeting here