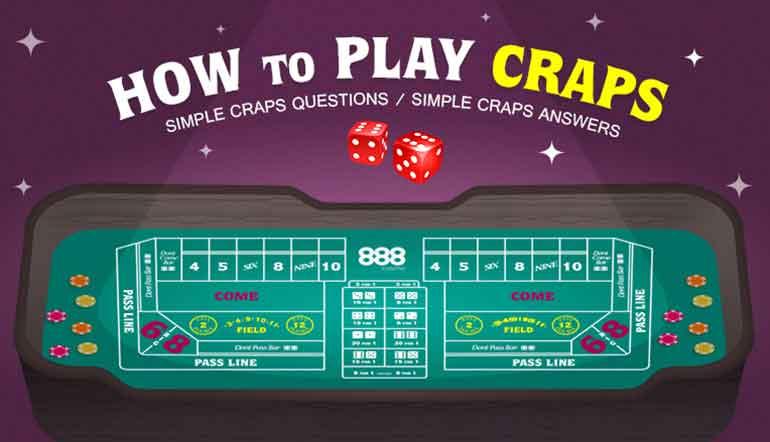 So many people want to learn how to play craps, yet the layout looks too complicated and before even making an attempt to learn the game these people flee for the safety of what they consider simpler games such as blackjack, roulette, slots and baccarat. But craps is actually an easy game to play, and it does not take a load of study to learn the proper way to bet. In fact, read this article and you’ll be able to start right now or at least right away!

Note: If you already know the game you will notice that I am not going into the “don’t” betting in this article.

QUESTION 1: HOW TO PLAY CRAPS?

How do you play Craps? The game looks way too hard and I do not want to make a fool of myself.

ANSWER: Relax, the game is a breeze. See that line that goes around the layout that says Pass Line? You put a bet on that Pass Line when the shooter gets the dice and is on what’s called the “Come-out” roll. His goal is to hit a 7 or 11 for a win; but avoid the 2, 3 and 12 which loses. Or he wants to establish a “Point Number”.

ANSWER: Check out the image of the layout again. See the boxes at the top with each box containing a number? Those are the point numbers: 4, 5, 6, 8, 9, and 10. On the come-out roll, if the shooter hits one of those numbers that becomes his point. He now must hit that number before a 7 shows to win but if the 7 shows before that number he loses.

Just a couple of more things, simple things, and you can play the game. When the shooter loses to the 7, he must give up the dice to the next shooter. If the shooter wins by hitting his point number he then goes on the Come-out roll again trying to hit 7 or 11; not hit 2, 3 or 12; or establishing another point of either 4, 5, 6, 8, 9 or 10. If he doesn’t hit that 7, he keeps the dice. He hits a 7 during the point part of the game, he loses.

QUESTION 3: WHAT IS THE PASS LINE BET?

Is this Pass Line bet a “sucker bet”? Or is it a bet you would recommend?

ANSWER: We talk about bets in terms of the percentage edge that the house has over the player. The Pass Line bet comes in with a house edge of 1.41%. That means the player’s expectation is to lose $1.41 per $100 wagered.

QUESTION 4: ABOUT THE PASS LINE BET HOUSE OF EDGE

Are there any other easy craps bets you would recommend that are also considered good bets?

ANSWER: Yes, one other and it is called the Come bet. Notice that big section on the layout that says Come? Once a point has been established you can put a bet on the Come section. This bet operates the same way as the Pass Line bet. If the 7 or 11 is rolled, it wins; if the 2, 3 or 12 is rolled, it loses; and if a point number is rolled it goes up on that point number. The house edge is again 1.41 percent.

Since the shooter has a point number that he must hit before the 7 shows, being up on the Come box number is also lost should that 7 show. However, the moment you place the Come bet a 7 will win the bet for you but it will also lose the point number. The dice get passed on.

So initial placement wins on the 7 but the Pass Line point loses. Also during the Come-out roll a seven loses the Come even though it wins the Pass Line bet. Think of the Come bet as a separate game with the house. That lessens any confusion.

QUESTION 6: DID YOU GET CONFUSED?

What if I do get confused between these two bets?

ANSWER: Then just make that Pass Line bet and forget the Come bet. Since the idea is that you want to play right away then only play the bet that is easy to do and good to make. There are many other bets, just about all of them not recommended but I’ll get to those in a latter column.

QUESTION 7: ANYTHING ELSE THAT I SHOULD KNOW?

ANSWER:  You are ready to go! But in case you want to read more information about the game, here are some topics that you might find interest in:

Now go and enjoy the game of craps.
Oh, and good luck!