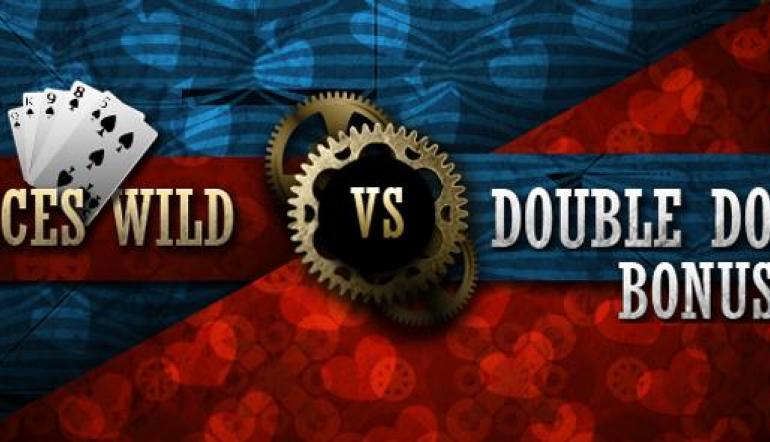 Double Double Bonus (DDB) is the most popular video poker game in the world. Deuces Wild (DW) is the second-most popular. The games have little in common strategy-wise. Let’s see why!

So I can put a dollars-and-cents value on errors if you play a hand the wrong way, I’m going to need specific games to talk about. I’m going to pick two games that return similar amounts, namely 9-6 Double Double Bonus game (98.98% when played well) and 15-9-4-4-3 of Deuces Wild (98.91%). If you look in the first column of each of the pay schedules below, you’ll see I’m getting “9-6” designation from the amount paid for the full house and flush, and the “15-9-4-4-3” designation from the amounts paid for 5-of-a-kinds down to the flush.  I am going to assume you are playing for dollars, five coins at a time. 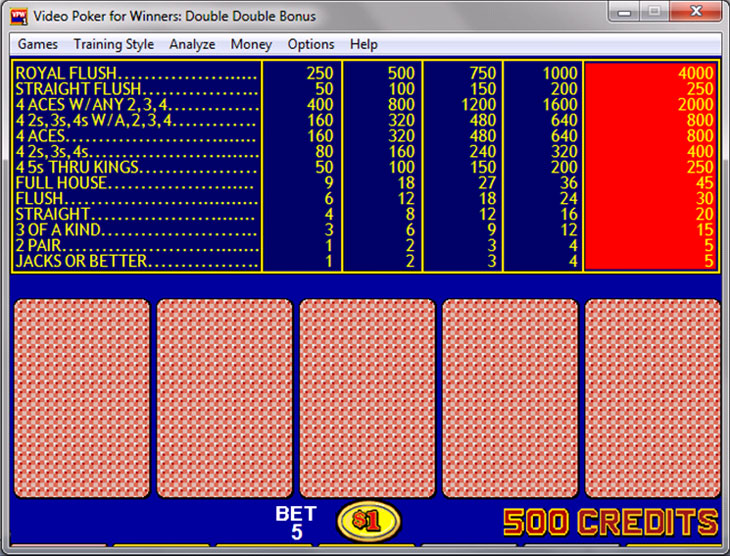 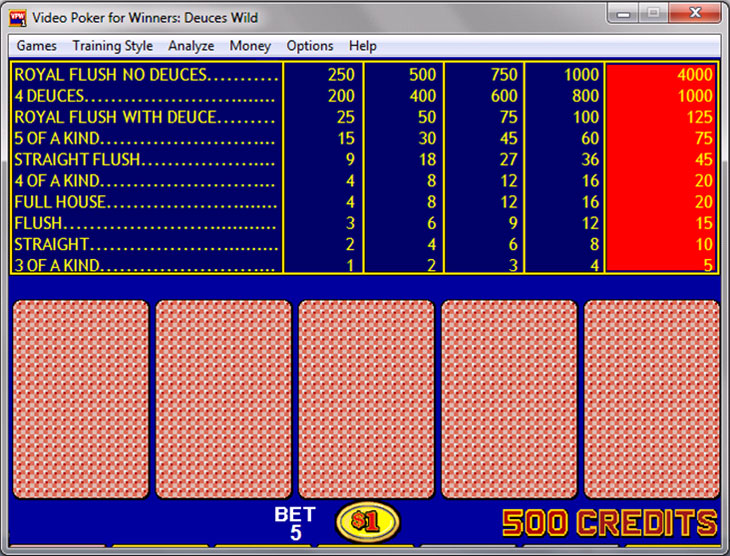 This is the classic “coward versus gambler” hand. I’ve written about it before, and I’ll write about it again because it’s so expensive to get it wrong! Cowards keep all five cards. Gamblers throw the 9♠ away, say a prayer, and try for the royal. What do you do?

Going for the royal is worth similar amounts in both these games, but the big reason you should be a gambler in DW and a coward in DDB is the amount you get for the straight flush.

This is not a particularly good hand, but it illustrates an important point. Today, we’re only going to discuss play KJ compared to throwing all five cards away. Which play do you like?

In DB, we definitely hold KJ as it’s worth $1.23 more than throwing everything away. High cards are valuable because if we can get a pair of them (usually KK or JJ in this hand, but QQ and AA are also high pairs and also possible results this time) we get our money back, which is worth $5 in this game. A high pair is worth quite a bit more than a low pair (22 through 10 10).

In DW, we should definitely throw everything away, which is 67¢ better than keeping the unsuited KJ. In DW, you need 3 of a Kind to get your money back. A pair of kings is worth neither more nor less than a pair of fours.

Many players get this wrong in both games! I’ve seen DB players hold KQJ here (a 28¢ mistake) and DW players throw everything away (costing themselves 12¢).

In both games, holding 4-card inside straights is part of the strategy whether you like it or not! But this particular hand contains TWO inside straights. In one game it matters which inside straight we should choose and in the other game it doesn’t matter at all.

In DB, holding KQJ9 is better than QJ98 by 32¢, simply because it’s easier to end up with a high pair. With KQJ9, in addition to the four tens giving you a $20 straight, there are still three more kings in the deck along with three more queens and three more jacks. That gives you nine cards to give you a high pair. With QJ98, you still have the four tens for a straight, but there are only six such cards (three queens and three jacks) to give you a high pair. Pairing up the eight or nine isn’t worth anything.

In DW, KQJ9 and QJ98 are exactly equal in value. In both cases, there are eight remaining cards in the deck to give you the straight --- namely four tens and four deuces. Any other card you draw would give you nothing at all.

We’re going to go for the straight, 3456 or 3457 in both games. So what’s so different between these hands?

BONUS FACT --- All DB games are played pretty much the same. There are minor differences in strategy from game to game, but not too many.

Next time I’ll show you an easy way to figure out which way you play each of these hands (and more!) in ANY DW game. To get the most out of your game don't forget to read about the 5 easy Video Poker tips that every casino player should know.