Double Double Bonus (DDB) is the most popular video poker game in the world. It comes with big hands --- and dry spells. Apparently it’s the right mix of “heaven or hell” for many players.

What makes DDB is how much you get for 4-of-a-kinds. 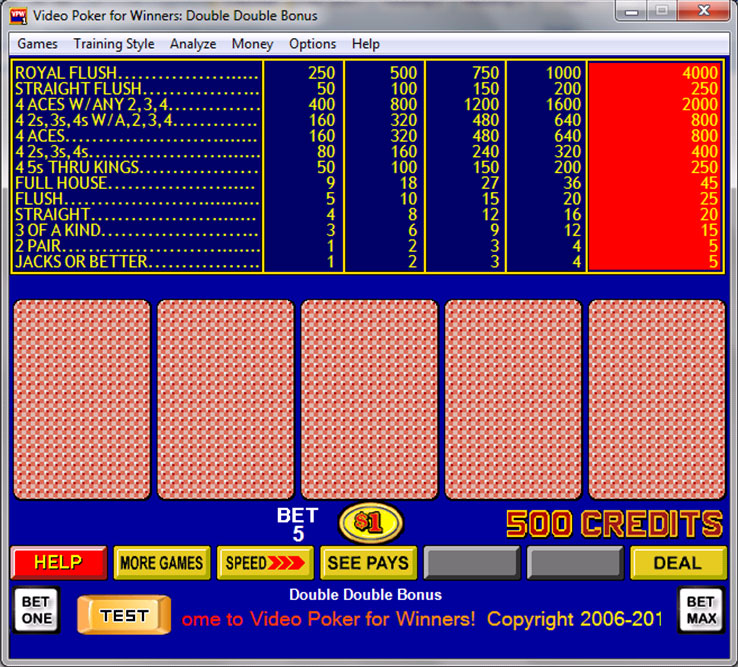 The picture above illustrates the “9/5” version of the game (where you are paid 9-for-1 for the full house and 5-for-1 for the flush) where good play yields 97.87% on average. There are better pay schedules and worse. The plays we talk about today will be accurate for all common pay schedules.

How much the errors are worth is calculated assuming you are playing for dollars, betting five coins at a time.

Are you a coward or are you a gambler? The cowards hold all five cards, while the gamblers toss the nine, say a prayer, and go for the royal flush.

The fact is that these two combinations are only equal if you end up with them as a final hand. As a hand you draw to, they are not worth the same at all. You are nine times more likely to get a full house (worth $45) if you hold two pair than if you just hold the kings.

Holding all five cards is a full house worth a guaranteed $45, but just keeping the aces is worth $63.58. When you start with 3-of-a-kind and you draw two cards, you have a 4.25% chance of getting the quad. This time, go for it!

Going for the hearts, where drawing a 2♥ is worth $250 and several other cards give you a regular flush or straight, is worth $11.64 on average. This is by far the better play.

Keeping all five cards for a $20 straight is sort of a “kiss your sister” hand. It’s not terrible, but not too exciting either.

Playing correctly is trickier than many people realize. Fortunately there are a number of software products that allow you to practice and correct you when you make a mistake. I use Video Poker for Winners, but there are other good ones as well.

I only showed a few hands today. There are many other hands where players also make mistakes. A little bit of practice will improve your results immensely!