The backbone of casino game mathematics is “probability.” Informally, we understand probability as a number that describes the chance that something will occur. It is usually given as a fraction or decimal with a value between 0 and 1, or as a percent with value between 0% and 100%. A probability of 0 means the event can never occur. A probability of 1 means the event always occurs. For example, toss two dice and have the sum come up 13; that’s impossible, so the probability is 0. Toss a coin and have it come up either heads or tails; that’s a certainty, so the probability is 1. Dice and coins never land on edge in our mathematically perfect world.

The formal theory of probability begins by understanding what’s known as the “sample space.” This is simply a description of all possible outcomes – everything that can possibly happen. Some examples: 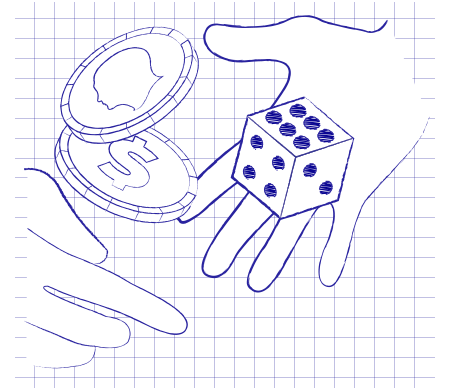 1. There are 2 outcomes when a coin is tossed; the sample space is {Heads, Tails}.

4. There are 38 outcomes when a live roulette wheel is spun. The sample space consists of the numbers 1 through 36, together with zero and double-zero.

5. There are 52 ways a single card can be dealt from a deck. The sample space consists of the set of card values (rank and suit).

6. There are 1,326 two-card starting hands in Texas Hold’ em. The sample space consists of the set of pairs of cards.

Many experiments have a sample space that is easily understood from the nature of the experiment but may not be explicitly described. Sample spaces are often very large for casino games, reflecting the intuitive feeling that there are too many things that can happen to count them all. Mathematicians have to count them all.

KNOWING THESE VALUES, WE DEFINE THE PROBABILITY OF THE EVENT BY THE EQUATION:

The word “Probability” is cumbersome to write out; it is customary to use the letter “P” when referring to the probability of an event.

What is not evident by the equation for probability is how to count the size of various collections. Unfortunately, in gaming there are very few simple problems and these counting problems can be exceedingly complex. For those cases when counting is easy, probabilities can be quickly computed. We’ll go through several examples to demonstrate some of the techniques. Hopefully these examples will help clarify the concept of probability for casino games and some of the methods that are used to come up with these values.

When tossing a coin, let H = “Heads” and T = “Tailes.” For a single coin toss, the sample space is {H, T} and it has two elements in it. To get a “heads” corresponds to the event {H}, which has a single element in it. So: 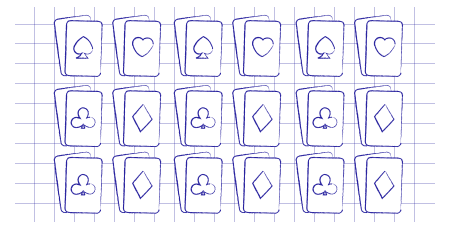 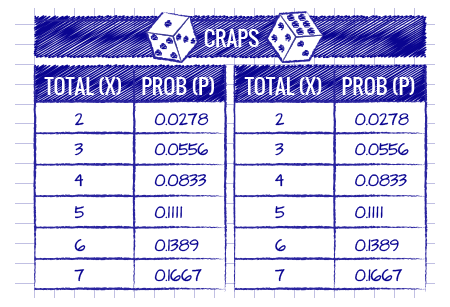 This figure gives the probabilities for the various sums of two dice: 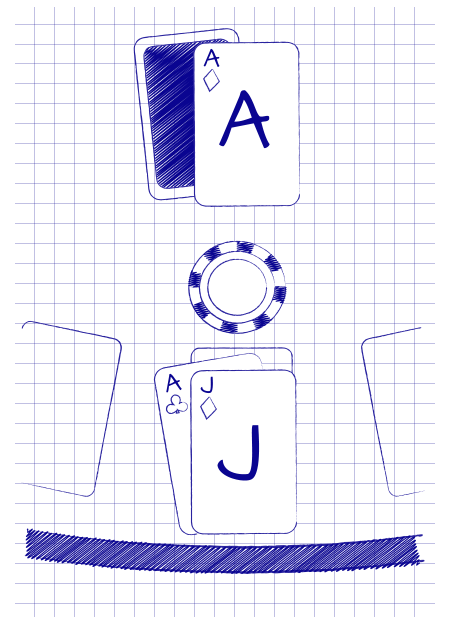 This means that the situation where a player can consider taking “even money” comes up about 29 times in every 10,000 hands, or about once every 345 hands. At a full table and at standard dealing speeds, this amounts to about one player “even money” decision per table per hour in single deck.
Doing the same computations for a six-deck shoe game, we get a sample space with size 15,039,960 and an event with size 52,992, so that:

This means that even money situations come up about 35 times per 10,000 hands, or about once every 284 hands. Even money is far more common, and therefore potentially far more profitable for the casino, in a shoe game.

In this example we are going to go through the mathematical details of the Pair Plus bet in Three Card Poker and compute all the probabilities.

EVENT: THREE OF A KIND

We need to count all the hands XYZ where X, Y and Z have the same suit and the hand is not a straight flush. We’ll pick on the suit Clubs. There are 13 cards. We can choose any of these 13 for the first card, any of the remaining 12 for the second card, and any of the remaining 11 for the third card. Because three cards can be rearranged in six possible ways and the order the cards were dealt doesn’t matter, it follows that the number of ways of getting a flush in clubs is (13 × 12 × 11) / 6 = 286. Of these flushes, 12 of them are a straight flush. This leaves 286 – 12 = 274 flushes in clubs that aren’t straight flushes. Because there are four suits, it follows that the total number of flushes is 274 × 4 = 1,096. So: 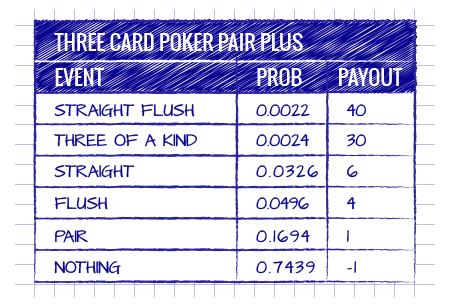 It follows that the hit frequency is 1-in-3.9. Rounding off, the player wins about once every four times he makes a Pair Plus wager.

The following figure summarizes the probabilities we just computed and the payouts for the various events using the most generous pay table Shuffle Master offers for this wager. It is customary to indicate a payout of -1 when the player loses; after all, he lost his wager. In all other cases, the player’s wager is returned and he is paid the amount indicated in the table.