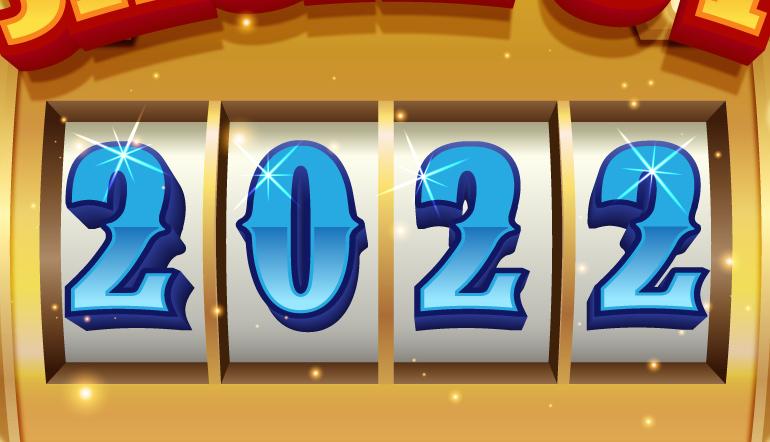 Every year, hundreds of new slot machine games are introduced to the public. Some are innovative new themes. Some layer special creative new ways to play upon already popular themes.

Those games don't break through everywhere at the same time. A game released in Nevada may take months to reach New Jersey or Pennsylvania, new online slots may or may not reach online floors, and new live slots can take time to reach online casinos.

Regardless, when games resonate with the public, manufacturers will find a way to get them into other venues.

The following five games are new creations to watch in 2022. They have a chance to reach the betting public in a big way.

Wolf Run has been a huge, long-running hit through the original game and a number of sequels. The howling wolves and outdoors imagery is appealing, while animation, video, stacked symbols, special wilds, and free spin bonuses keep players intrigued.

The latest in the series is Wolf Run Eclipse, with five video reels and 40 paylines. It's packed with new features including a progressive jackpot, four progressive free-spin levels, and a wheel bonus.

You want to see bonus symbols on reels 2 and 3, followed by a wheel symbol on reel 4. That starts a wheel spin that can bring you the linked progressive jackpot that starts at $10,000, or it could bring a flat five free spins, or one of the free-spin progressives.

If you win the Mini spins, you get at least five free spins and are guaranteed a stack of baying wolf symbols. The Minor bonus brings 11 or more spins and two stacks of wolves. For the Major, you get 11 or more spins with three stacks, and the Mega is special: a whopping 102-plus spins with three stacks of wolves. That'll get your credit meter leaping.

The main attraction is a swirling green tornado of greenbacks that can bring a whirlwind of winnings in a hurry. But Cashnado, a five-reel, 243 ways to win system, comes with two themes -- Flash Fire and Super Strike -- and is loaded with features.

It's not a hold and respin game, but it does have circular symbols that hold coin amounts. Land a key symbol on the first or fifth reel and you win those coin totals. Land keys on both the first and fifth reels and the totals are doubled.

Sound effects give you warning when the big event is possible. You'll hear a voice intone, "Advisory: Cashnado Warning in effect," while the screen displays "Cashnado Warning."

When the display reads "Cash Grab Available Now," it's time to watch out. Then, if you land a Cash Grab Bonus symbol on the reels, the green tornado takes over the screen and blows around images of currency. Your job is to touch the currency for credit prizes and extra picks.

It's akin to the wind booths sometimes used in casino promotions. Players enter the booths and heavy duty fans blow cash around for lucky players to catch.

Here, the high winds are virtual, the tornado is green and you touch the screen instead of catching cash, but it's still a blast.

Monopoly slots have had a great run ever since WMS Gaming brought out the original editions in the late 1990s. Today, WMS is part of the Scientific Games family and Monopoly rolls on with new titles every year.

Monopoly Cheaters edition is great fun – doubly so if you've ever been tempted to nudge the dice to a different number. Not saying that you'd ever do such a thing in a friendly game, of course, but if you've ever landed on Boardwalk with another player's hotel, you know the fantasy of a switcheroo is there.

Here, cheating is not only condoned, Mr. Monopoly will help you along.

In a five-reel game, you know it's cheat time when Mr. Monopoly lands on the first reel. A siren sounds and Mr. Monopoly spins the playing field end over end to add whole stacks of wilds, or he'll reject a losing spin shake the field and clone reels to give you winning matches.

Other times Mr. Monopoly might bang his hand on top of the reels so old symbols fall off to be replaced by better ones or wave his magic hat over the reels to upgrade symbols.

After any of those cheats, he might also reach into his coat and grab some extra cash to drop onto your meter.

There are separate cheats for a Monopoly board bonus. When you reach the bonus, you pick an icon to determine how many dice rolls you get. Mr. Monopoly might help on the sly right from the start. If you're awarded three rolls, Mr. Monopoly might rewrite that for a bigger total.

As you move on the board, sometimes Mr. Monopoly will lose count in your favor, and you might move extra spaces to a more valuable property.

What you see isn't always what you get, but the discrepancies are in your favor.

Each game has its own free spin bonus. In a Pirate Plunder round of at least 12 spins, landing harpoon symbols adds rows of symbols to bring more chances to win. In Golden Blessings good luck symbols add more rows, and if you reach the maximum eight rows and 16,807 ways to win, you also win eight more spins.

As for the progressives in either game, you pick from a field of 12 Cornsquealious images, each hiding a progressive level. When you match three, you win the corresponding jackpot -- Mini, Minor, Major, or Grand.

That's the same mechanic used in the original game, but in the Deluxe games, some jackpot icons are emblazoned "BOOST." Land a "boost" among your winning icons, and your jackpot is boosted by its starting value. For example, if you're playing for pennies, the starting value of a Minor jackpot is $25. Imagine the pot has grown to $38, and you match three Minor symbols, with one carrying the "BOOST" legend. Then $25 is added to the pot and your win is $63.

Kicking off a new game family called UpShot, Brilliant 7s and Prosperity Rising feature pinball-style bonuses. They're five-reel slots and when UpShot symbols land on reels 2 and 4, you go to the pinball bonus.

On the panel below the main game screen, you'll see plungers and springs, the image of the mechanism used to launch balls on physical pinball machines. Five plungers are lined up horizontally, and you touch one to launch virtual balls on the main screen.

On the main screen, credit amounts move across the screen at different prize levels. The lowest is bronze, and you get one row of credit symbols moving left to right and one moving right to left. If a ball you launch hits a credit symbol, you win that award.

Not all shots will hit paydirt, but you get five shots at bronze level, five for bigger prizes at silver, three at gold, and finally one to hit a prize wheel where you can win a progressive jackpot.

There are five progressive levels and both games also have free spin bonuses. The UpShot bonus is the eye-catcher that stands out from the slot machine crowd.