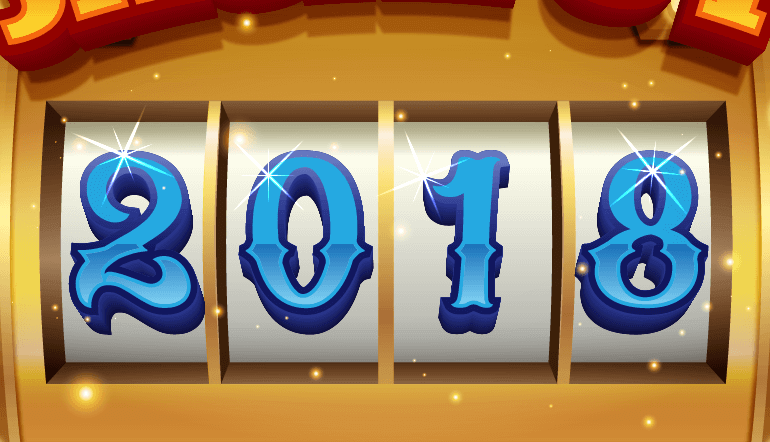 Every year, hundreds of new slot games are released to compete for the affections of players. New themes, new graphics, bonuses and ways to play keep us coming back for more. It will be no different in 2018. Already, new games are making their way to casino floors. Here are 10 of the best that are sure to command players' attention.

There's a new breed of skill-based games coming into casinos that are designed to capture the imaginations of those who grew up playing video games in arcades and home gaming systems.

Beat Square is an innovative example of that new breed. Named Best Slot Product for 2018 in Global Gaming Business magazine's  Gaming and Technology awards, gives extra awards for players who can keep the beat.

Instead of traditional slot reels, Beat Square has 16 buttons arranged in a 4-by-4 grid. Konami has a selection of modern, rhythmic music, and when you make your bet, buttons on the grid light up in time to the music.

Your task is to hit the buttons as they light up in rhythmic patterns. More than one can be lit at a time -- you'll want to use both hands as you get in the groove. The more correct beats you tap, the higher your score and the bigger your win at the end of the round

It's a concept that figures to resonate most strongly with younger players, but older players up for a test of rhythm and reflexes can have a good time, too.

From the TV screen to a new slot game, Buffy Summers battles the forces, slaying vampires and demons. On the five video reel, 1,024 ways to win slot, slaying the vampires also means wins for the player.

Buffy the slot is chock full of bonus features, including a pick'em bonus, the Primeval Progressive Wheel for jackpots, expanding reels on the base game and two free-spin bonuses, one with a Hellmouth theme -- that's the gateway to the realm of demons that sits under Sunnydale High School -- and the other themed on lead characters Buffy and Angel.

Players will love it when the expanding reels grow and add additional symbols. When that happens, the game creates 32,768 ways to win instead of the usual 1,024. That's when you have the potential for huge wins.

Monopoly has been a huge, long-running success for WMS Gaming, and Hot Shot games are ever-popular for Bally Technologies. Both manufacturers are now part of Scientific Games., and we're seeing games that merge the best of both worlds.

Monopoly Hot Shot is a a three-reel, nine-payline game. During regular spins,  you could win extras through the Hot Shot sets of spinning mini-reels.

And at bonus time, there's the famous Monopoly game board, launched when three Scottie dogs land on the reels. As you roll the dice in a trip around the board, there are extras such as multipliers when you land on a railroad, a credit refund when you land on a utility or tax spaces, a pick'em feature when you land on Chance, Community Chest or Free Parking, even a giant slot payoff for landing on Go.

On top of all that, there's a wide-area progressive jackpot and three smaller local progressives levels, leaving a game jam-packed with extras.

On the free spins, those wild cave symbols carry 2x or 3x multipliers, and you can win additional free games during the feature. Those multipliers and plenty of free spins can bring some Mammoth wins.

A 40-line new slot game, Rays of Egypt basks in the bonus benevolence of the ancient sun god Ra. During regular play, any Sun Scatters that land on reels open the Eye of Ra at the top of the screen, and the Eye adds shimmering stacked gold wilds to the reels.

Three scarab beetles unlock the GoldLink Progressive Bonus. Select a beetle to reveal a number of spins on bonus reels where all the symbols are Egyptian coins. Look for four different colored halos around the coins -- they not only award additional free spins but lock onto the screen for remaining free spins. Collect halos to unlock one of five progressive jackpot wheels. The final award of any progressive wins plus credits from the coin scatters can create huge payoffs.

The stacks and wilds keep you going in regular play, and the slot progressives plus payoffs on scattered coins make bonus time an event to savor.

Instead of a standard five video reels, each three symbols deep as you find on most slots, Wrecking Ball has four reels arranged in different-sized columns. The first is five symbols deep, the second has four symbols, the third has seven and the fourth has six. That leads to an 830-ways-to-win base game, giving you extra chances on sever spin,

During the main game, crane symbols that land at the bottom of a reel trigger the Wrecking Ball feature. This feature includes crane animation that swings through the reels, crushing symbols and imploding buildings, leaving behind a trail of wild symbols that offer opportunities for big wins.

The Smash Bonus feature is triggered when a bonus symbol lands on reel one and reel four. Players interact with a virtual crane by moving the digital joystick left and right to target and select a building to smash, revealing a prize.

In the Power Wheel Bonus, players can spin the wheel by touching the screen for a chance to win credit prizes; the Minor, Major or Mega Jackpots; Knockout Wilds Free Games; or Transforming Wilds Free Games.

Both free spin bonuses feature reels that grow to eight rows for extra chances to win. In Knockout Wilds spins, each wild symbol that lands on the reels locks into place for remaining free spins. In Transforming Wilds spins, wilds also lock into place, but when Diana Prince appears and transforms into Wonder Woman, she rounds up any locked wilds into one big block for a chance at huge payoffs.

On Shotgun Willie, lining up three Shotgun Willie symbols on an active ninth line awards the wide-area progressive. There are 2x, 3x, 4x and 5x multipliers on some bar and 7 symbols, and two or more multipliers on the same line multiply each other, so the wins can add up fast.

"The Voice" has been an international reality television sensation. IGT's slot machine is based on the American version, complete with coaches lending their aid to up and coming singers in a five-reel, 40-payline video slot.

The Voice delivers an immersive experience with popular songs and video footage from the show, and features celebrity coaches Adam Levine, Blake Shelton, Ricky Martin and Rita Ora. The game highlights iconic elements from The Voice including the stage, coaches’ chairs and red button.

IGT blends those show elements nto wagering fun, highlighted by The Voice Bonus. The bonus serves as the gateway to the Audition Free Spins, Performer Bonus, coach progressives or The Voice Jackpot. With so many bonus options, there as many surprises as in the TV competition.

Slot players and casino operators alike have been waiting eagerly for this one ever since it was show in demo mode in Las Vegas at Global Gaming Expo 2016. Now it's ready to roll out.

The Seinfeld base game has four 5-reel, 15-line mini-games, each starring one of the four main characters – Jerry, Elaine, Kramer, and George.

During the base game, characters can appear on the reels to add a mini-bonus, such as Jerry’s Added Wilds, Kramer’s Wild Reels, George’s Multiplier, or Elaine’s Giant Reels.

With plenty of video from the TV comedy classic, the Seinfeld slot is an entertainment extravaganza.

Slot Machines
Slot Games
About the Author
By
John Grochowski