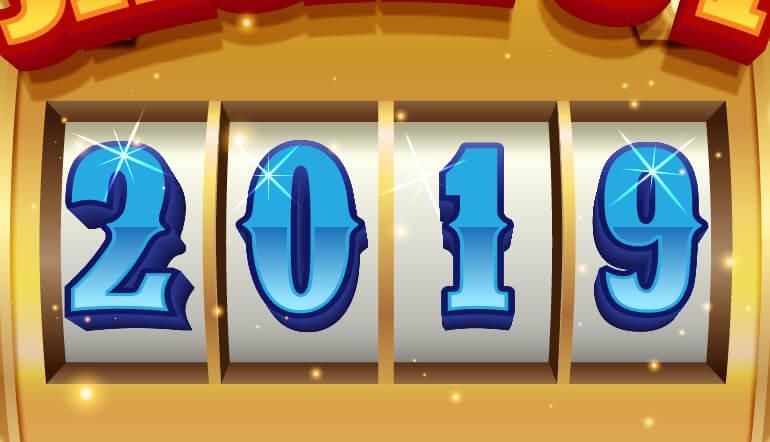 Slot machine excitement is a big part of what drives offline and the online casino industries. Big wins and bonus entertainment are the name of the game for slot players. But anticipation of new ways to play are part of the excitement too.

Casinos and their suppliers know that and they keep the new games coming. Here are some of the prime coming attractions – games you can get excited about as they make their way into casinos in 2019.

When a statue symbol lands anywhere on a reel, it activates an icon displayed above that reel. As players continue to wager and spin, they’ll collect additional statue symbols. All reels that have collected two statue icons will turn wild for the 10th spin for the chance to win big.

Long a pioneer in slots with progressive jackpots, IGT turns it all up a notch with a new lock and re-spin feature.

Initially, the feature is available on two themes: Feline Fortune and Egyptian Fortune.

Collecting either four, five or six fortune link symbols in the base triggers the Fortune Link series. The difference in the requirement is your bet: Higher coin denominations mean you can launch the feature with fewer symbols

Once you’ve collected the required number of symbols, they remain locked in place during the Fortune Link feature. You then get three re-spins to collect more Fortune Link symbols.

The more Fortune Link symbols you collect, the bigger your prize. Filling the entire screen with Fortune Links symbols wins the top jackpot.

Everi: Hot Stuff, the little devil of comic book fame, was a red-hot winner in the original Smokin’ Hot Stuff slot. Now the mischievous imp with his asbestos diaper and trusty trident returns in a 243 ways to win at slot, perfect for pennies, packed with multipliers, a progressive pick bonus and progressive jackpots available at all bet levels.

The progressive pick bonus is triggered randomly after any base game spin. Players pick from 25 coins to reveal either a progressive jackpot or pitchfork symbol. Hot Stuff removes the lowest remaining jackpot each time his pitchfork is revealed, thus guaranteeing higher prizes.

Also available is the Wicked Wheel bonus, triggered when three wicked wheel symbols land scattered on reels 3, 4, or 5. When a Hot Stuff symbol is part of a winning combination on reels 2, 3, or 4, it multiplies the winning combination by 2x, 3x, or 4x for some smokin’ payoffs.

The magical duo team up in a 9-payline slot with three mechanical reels, targeted at 25-cent and $1 play.

Loaded with an innovative feature trigger and eight interactive bonuses, players get constant assistance from famous stage magicians Penn & Teller as they wonder what  will happen next. Game play incorporates some of Penn & Teller’s most famous tricks, including Vanish a Rabbit, Miser’s Dream, and Shadows. And Everi has added some magic of its own.

The wheel bonus is triggered when three wheel symbols land on any active payline awarding one wheel spin. Wheel prizes include the mini, minor, mega, major, and grand progressives or from 25 through 250 credits.

Players spin the reels and travel through life while collecting credit prizes, bonuses, and jackpots. Career Day is a 3-reel, 9-line game on the TwinStar J43 with iReels cabinet. The game boasts a life-changing single-level, wide-area progressive jackpot that can be won in the base game and is part of Scientific Games’ Cash Connection or Reel Adventures  links.

The game’s centerpiece is the Game of Life Bonus where players are assigned one of four careers - a firefighter, pro athlete, construction worker or culinary chef. You then spin for paydays, raises and spins of a wheel that award moves around the game board.

Stops along the way award credit prizes, additional spins of the wheel, and extra bonuses such as the Weekend Getaway with free spins where reel 2 is Wild and all pays are multiplied by three; or the Groundhog Day Bonus where the reels spin and stop until a winning combination is awarded.

The goal is to reach the Retirement Island Bonus board game where even more prizes, multipliers, and bonuses  are available.

The No. 1  game in Asia, Jin Ji Bao Xi making its North American debut with 5-reel, 243 ways game. Rising Fortunes, available on the TwinStar J43 or the new TwinStar Wave XL cabinets, includes the popular ALL UP bet structure where players can make an extra wager to buy higher-paying symbols.

One game highlight is the Jin Ji Bao Xi Feature where players pick icons to win one of four jackpots.

If six or more Red Gong symbols displaying credit prizes land on the reels, a Feature Selection is triggered and you can choose your casino bonus. The sum of the credit prizes creates the Shou Bonus, is one of the feature selection options.

Players also can choose between a Top Up Bonus and Free Games Bonus where eight  free games are awarded. During free games, players can win additional free games while each Gold Gong symbol that lands on the reels award the Shou Bonus.

The latest version of the iconic Cash Spin game  is a 5-reel, 30-line game.

The star of the show is a U-Spin Wheel Bonus where players swipe the touchscreen to spin the big wheel.  With one spin, players can win credit prizes, a Free Games Bonus or one of three near-area progressive jackpots.  If the wheel stops on the Free Games Bonus wedge, players choose from five free games scenarios where they can be awarded up to 30 free games with a corresponding multiplier of up to 5x pay.

There is also a Money Bag Bonus which is triggered when three scattered Money Bag symbols land on the reels. Players pick one of the money bags and are awarded a credit prize, a credit prize with an additional pick, or the U-Spin Wheel Bonus.

The Asian-themed Shou Hu Shen is based on the good luck and guardian lions along with four progressive jackpot levels. Together, they  promise fun and the chance to win big.

Featuring fireworks and sparks animations that add excitement to gameplay, Shou Hu Shen can award massive progressive jackpots. The Jackpot Pick Bonus is randomly triggered any time a Wild symbol lands on the reels during base-game play. Players touch and pick from 12 Lucky Fu symbols until they get three matching progressive symbols to win one of the four jackpots.

Mayan Chief, a Konami favorite, gets a fresh look with six reels, each five symbols deeo, on the curved Concerto Crescent and tall Concerto Stack cabinets.

A free games feature gives you up to 15 free spins with a 2x multiplier. And for extra bonus excitement, players get to choose their event in the Balance of Fortune feature. When  Balance of fortune launches, you can choose regular free games, a random credit prize, or super free games combinations with different combinations of more or fewer free games matched with lower or higher multipliers.

Slot Games
About the Author
By
John Grochowski