Double Draw Poker (DDP) is a relatively new game that appears to be gaining ground in some markets, both in the US and internationally. The first time I saw DDP was at the Global Gaming Expo in 2013. After learning how DDP was played, I immediately commented to the game developer that DDP appeared to be extraordinarily vulnerable to collusion (information sharing among players). Over this last week, I finally did the work to quantify this vulnerability. The edge the advantage player can gain over DDP rivals hole-carding Mississippi Stud (see this post and this post). DDP collusion is in the stratosphere of advantage play opportunities against proprietary games. For the AP who is looking for the greatest new thing out there in proprietary games, DDP collusion must surely be near the top of his list.

DDP is played with a 54-card deck consisting of the normal 52 cards plus two Jokers. These Jokers are semi-wild, like Jokers in Pai Gow Poker. These Jokers can only be used to complete straights and flushes. Otherwise, they count as an Ace. DDP is not a game where the player competes against the house. Rather, the player competes against a pay table.

The reason that collusion works should now be obvious. If six players are seated around the table, the players will collectively know at least 30 out of the 54 cards when making their first draw decision. If these six players share information about their hands, their draws will become substantially more accurate. Moreover, the player seated at third base may know up to 45 cards before he makes his first draw. This happens if each of the five players before him draws 3 cards. Imagine drawing to a poker hand knowing all but nine cards.

Sharing full information among six players and subsequently playing perfect draw strategy is not a human-feasible method of advantage play. But, the edge the players have over the house is large enough that there is plenty of room to simplify communication and draw strategies, while still achieving a substantial edge. I have not attempted to quantify such strategies, nor do I anticipate doing so. For me, it is enough to show what is possible.

Here are the rules in more detail:

If the player’s final hand has poker value two-pair or better, then the player is paid even money on his Ante and Draw wagers. His Bonus wager is paid according to the following pay table:

Here is the rack card (click on the image to make it larger):

As Michael Shackleford states on his page on DDP, the house edge for DDP is 6.7152%. Shackleford states that his results were obtained by a programmer, “JB.” I was fortunate to have previously written “two Joker” computer code back in 2006 that could be modified for this project. Nevertheless, programming this game was still a complicated task. It took me two days of conceptual thinking to figure out a programming strategy. After two more days of programming and debugging, it took my program took about 11 hours to complete the cycle running one thread, and just under 3 hours running four threads. After a few false starts, I came up with the same house edge as JB.

The following spread sheet lists the 172991 initial hands that can be dealt when playing DDP. Each hand lists the draw strategy for that hand, the number of “suit-permutations” considered for that hand, and the expected value for the hand.

The player who wants to know basic strategy for DDP can refer to this spread sheet and create his own version. I have not attempted to quantify basic strategy for DDP nor do I anticipate doing so. However, if you are interested in basic strategy, I refer you to this impressive strategy written by Michael Shackleford. Basic strategy for DDP is extraordinarily complicated and well beyond the ability of all but the most skilled players. In other words, if a player is using perfect DDP strategy, then he is  doing something else to gain an edge over the casino.

With a baseline house edge of 6.72% and extremely complex basic strategy, the typical player is surely playing against an edge of 10% or more. I have not seen another casino table game that has as much going against it, from a pure edge/strategy viewpoint. The house edge for DDP could easily be lowered by improving the pay table for the Bonus bet. The game developer may have set the house edge at 6.72% knowing in advance that the game would be vulnerable to collusion.

The following table gives the combinatorial analysis for DDP, based on the poker-value of the initial five card poker hand that the player is dealt: 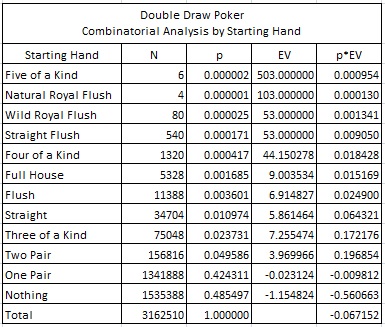 Note that 48.55% of the time, the player is dealt “Nothing.” For these hands, the house has an average edge over the player of 115.5%, based on the player’s Ante bet. In other words, if the player initially wagers $10 on the Ante and Bonus wagers (a total of $20) at the start of the hand, and he is subsequently dealt “Nothing,” then on average his expected loss is $11.55. The player would have to be dealt Two Pair off-the-top to have an edge over the house, on average.

A simple spread sheet computation using the spread sheet provided above shows that the house has the edge on 73.0501% of the initial five-card poker hands. The hand favors the player 26.9499% of the time. In other words, the player is dealt a long-term loser on about 73% of the hands he plays.

Another sobering view of the combinatorial analysis for DDP comes from breaking down the house edge by the number of Jokers the player is initially dealt:

The table above also underscores one reason why collusion is so powerful in DDP. If six players receive no Jokers between them in their initial hands, then they are well-positioned to modify their drawing strategies.

The following table gives the results of my collusion simulations for DDP. I note that these results are for perfect collusion: the player has perfect information about all of the known cards and makes perfect strategic decisions based on this knowledge: 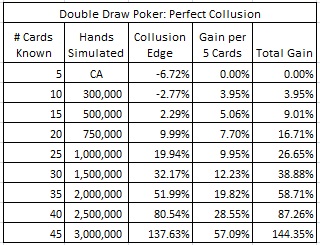 The third (middle) column gives the edge based on the given number of known cards. As few as three colluding players can get an edge over the house. With a full table of six players (30 known cards), this edge increases to more than 32% for the player at first base. As players around the table see more cards, the edge can get as high as 137.63% for the player at third base when making his initial draw decision.

The following graph gives a different perspective on these results: 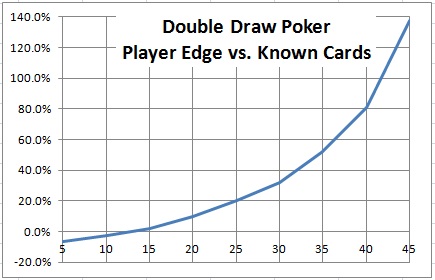 There should be no assumption or expectation that such edges can be achieved in practice. I personally have no idea how to go about creating a feasible collusion strategy for DDP. But, even if the players give back 75% of their edge based on sharing a reduced amount of information and using a simplified strategy, six colluding players are still going to eat up DDP.

My opinion is that DDP has an urgent game protection issue. Any casino that offers DDP should make sure that they have a “no sharing” policy in place and that this policy is strictly enforced. Staff and surveillance should monitor DDP for signs of player collusion. There is no easy fix for the game protection issues that DDP raises. Protecting DDP from player collusion will require vigilance.

Poker Tips
About the Author
By
Eliot Jacobson Ph.D.