Criss Cross Poker (CCP) is yet another stud poker clone. Like all poker clones, CCP faces a very tough road towards success. In recent months I’ve been contacted by a few people who have asked me to take a look at hole-carding CCP. Now that CCP is getting a few placements, I decided to do the analysis. Because CCP plays a lot like Mississippi Stud (MS), I thought that CCP might have very significant hole-card issues. As I will show, the player can get up to a 49.37% edge over the house seeing just one hole-card. I think that qualifies as significant.

CCP has three similarities with MS:

Of course, CCP is not MS, so there must also be some differences. To understand how CCP plays, consider the following picture. 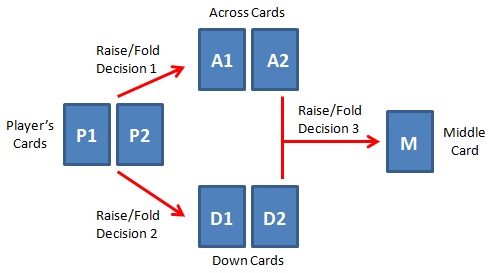 Here are the rules:

Note that the Across cards, Down cards and Middle card are community cards that are shared by all players at the table.

The rules for the game are fairly easy. It’s just two-way Mississippi Stud. With this in mind, the way that wagers are resolved becomes intuitive:

Here is the bonus pay table for paying the Across Raise, Down Raise and Middle Raise:

I apologize for being so long-winded about this game. When I was working on the math, I decided that the actual layout of the game made it difficult to understand the rules and strategies. Here is the actual layout for the community cards, hence "Criss Cross": 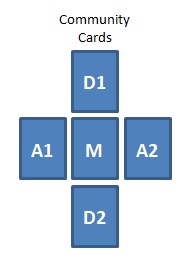 The house edge for CCP is 4.328536%. This house edge is the percentage of the total initial money wagered, remembering that there are two initial Ante wagers. Thus if a player places two $5 Ante wagers, then his expected loss is approximately 43.3 cents.

Basic strategy for the player’s first raise (the Across Raise) is easy to describe:

The following Excel file gives the EV’s for Across Raise decision:

The next strategic decision for the player is the Down Raise. The player knows four cards {P1, P2, A1, A2} when making this wagering decision. Intuitively, the strategy should be about the same as the Across Raise, as the Across hand and Down hand pay independently. With a few exceptions, playing "Basic strategy" for the Down Raise is correct, and for those cases when the strategy does change, the difference in edge between the two is slight.

The reason for these slight changes in  strategy is that if the player makes a good hand with the Across Raise, then he is less likely to make a good hand after his Down Raise. That is, the outs used by hitting good cards on the Across Raise removes those outs for the Down Raise. Conversely, if the player’s Across cards are a bust, then he is more likely to hit good Down cards, improving the odds for his Down Raise.

Here are some typical exceptions:

The following Excel files give an exhaustive listing of the EV’s and basic strategy for every four card combination that can occur after the player’s two initial cards and the two Across cards.

The following files cover the case where the player’s Across Raise was 1 unit. Caution, these files are each about 12MB:

The following file covers the case where the player’s Across Raise was 3 units. It is about 3MB:

I am not going to take the time to quantify these files into a fixed set of rules for basic strategy for the Down Raise.

I will consider three hole-card scenarios.

In the first, the AP sees one of the Across cards. This information can be used for his Across Raise, but after that, the usefulness of the information has expired. The game is therefore (0, 3, 4, 6).

In the second case, the AP sees one of the Down cards. This information can be used for both the Across Raise and the Down Raise, but is not useful for the final Middle Raise. The game is therefore (0, 3, 5, 6).

The final situation is when the AP sees the Middle card. This card can be used for all three raises. In particular, the AP’s final raise, the Middle Raise, will be made with 100% knowledge about the final poker rank for both the Across Hand and the Down Hand. In the case of seeing the Middle card, the game is (0, 3, 5, 7).

The following table summarizes the edge for each of these hole-card scenarios:

There are combin(52,2)*50 = 66300 possible ways the player can be dealt two initial cards and see one hole-card. The following Excel file gives the Fold/Raise EVs and correct hole-card strategy decision for each of these 66300 starting situations. Different tabs in this Excel file cover the different hole-card situations (0, 3, 4, 6), (0, 3, 5, 6) and (0, 3, 5, 7). Note that this file covers only the Across Raise. I have not created any data files for the Down Raise or Middle Raise. This file is about 5MB.

In looking through this Excel file, hole-card strategy for the Across Raise would be straightforward to write out. Maybe I am just feeling lazy, but I’m not going to do that work for this game (at least, not yet). However, I am certain that if a high-level AP spotted a middle card, he would be all over this game like a duck to a June bug. An edge of 49% is just too good to pass up. Likewise, if a sloppy dealer is exposing more than one hole card, the APs will be there.

I will offer one possible game protection solution. I suggest dealing the game by hand, as follows:

Of course, if you have either a "sharp" dealer or an incompetent dealer, this could backfire.