A few months back I was delivering a game protection seminar at a casino that was locked down tight. They had no obvious issues, so I was struggling to find something meaningful to present to them. As I examined their Three Card Poker (3CP), I observed it was dealt from an iDeal shuffler. The cards were made by one of the top companies (Angel), hence no edge sorting. The shuffler was placed by the dealer’s left hand, with the discard tray on the dealer’s right side, which is the preferred setup. They dealt the game using the “New York, New York” procedure, where the dealer’s cards remain in the shuffler until all players make their Play/Fold decision. Hole-carding was not possible. I stared at the game, convinced I could find something meaningful to say about it.

Here’s how the shuffler looked when the first packet was ejected: 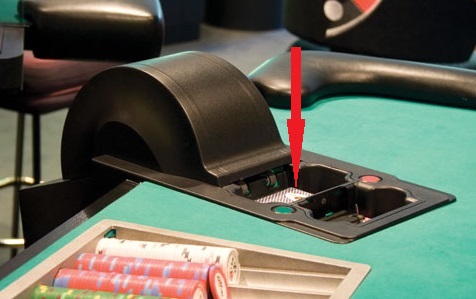 It occurred to me that if there was any flaw at all with the cards, no matter how small, the player at first base had ample opportunity to stare at the top card and find it. Even a minor imperfection could be picked out. Although my focus was on edge sorting, any other mark, whether environmental or intentional, could give away information about the top card. Cheats and advantage players alike had the dual luxuries time and opportunity.

The top card in the shuffler will be in the packet of cards dealt to the player seated at first base. Knowing something about the rank of this card allows the player seated at first base to adjust his wager based on the value of this card. If the top card gives the AP the edge, he’ll make a large wager. Otherwise, he’ll make a small wager or sit out the hand. I presented this finding in my seminar, but had very little information to back up my speculation. It wasn’t a lot, but at least I said something that appeared to have merit for their game protection. The casino subsequently changed their dealing procedure so that the cards were not put into the feeder until all wagers were placed. A possibly phantom issue was fixed.

Both blackjack and baccarat have well-known top card issues (see this post and this post). I realized that APs were actually top carding proprietary games as well. The observation I presented to the casino was not a misguided attempt at creating something substantial to include in my seminar. I was not inventing phantom game protection issues after all. Top carding proprietary games was a real game protection issue that APs were trying to exploit. As a result of this confirmation, I recently analyzed top carding Caribbean Stud in this post.

In considering top card analysis for 3CP, on page 137 of Beyond Counting, James Grosjean states:

Grosjean does not give the rest of the information on the edge for the other ranks (anyway, most people don’t own a copy of Beyond Counting). I decided to complete Grosjean's work. Here are the edges associated with prior knowledge of the rank of the top card before the player places his wager:

In 3CP, only the Ace and King provide the player with an edge, all other top cards favor the house. The optimal sort for top carding is therefore:

Note that this sort is different from the sort used if the dealer’s three cards can be viewed (see this post).

The following table summarizes the potential profit from top carding Aces and Kings in 3CP:

Compared to Caribbean Stud, with a win per 100 hands of 2.8958, 3CP offers a much more significant return. If these two top carding opportunities exist in a casino, APs will certainly focus their attention on 3CP first.

The following procedures can be used to protect 3CP from top carding: