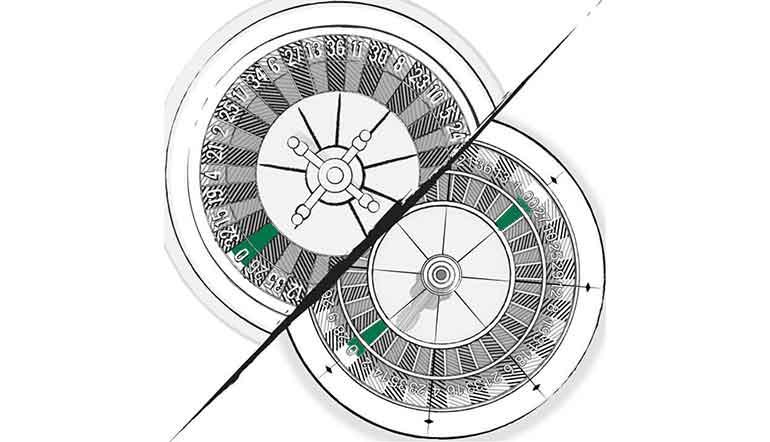 Where did the roulette wheel and ultimately the famous casino game of roulette originate? Perhaps in several places and from some or many people and cultures. What follows are some examples of roulette’s possible origins and how players have played the wheel in an attempt to beat it

His name was Blaise Pascal and he was one of the most famous and astute mathematicians and scientific geniuses of the 1600s. He was also quite religious, often driven by science and theology to discover the ultimate truths of existence, and he created what has become known as Pascal’s Wager, a notion that to this very day contains persuasive power, if not overall theocratic authority, being thus:

You bet your life and soul (if you have one) that either God exists or doesn’t exist. If He doesn’t exist and you believe in Him then you have given up some worldly pleasures to discover nothing as death ceases your full existence. However, if you do not believe in God and He does exist then death is going to be a horrid experience as you find out that not only were you wrong but…well, you can guess the rest. Thus it is best to believe in God than not to believe in God.

Thanks to Pascal, this is – short and sweet – a coin flip, a gamble: Yes or no? God or no God. It is the ultimate gamble with your life and with your soul. To Pascal the best bet was to believe in God as that gave you the greatest chance for perpetual happiness.

However, Pascal wanted even more than this. He wanted to discover something that was eternal right here, right now in this world and that something is what we call a perpetual motion machine.

A perpetual motion machine is one that runs on no outside energy. Read that correctly – it is an amazing concept. Perpetual motion violates the laws of motion that prove some outside force must be used to move objects, as objects cannot move themselves. Energy must be pushed into the system to get it to move. When that energy stops then that movement stops.

The attempt to discover and/or invent such a perpetual motion device has been a vision of many scientific visionaries – all of them wrong in their assumption that such a thing is possible.

[Please note: Some of the greatest frauds in the “pseudo-scientific” world have lied and said that perpetual motion is possible and that they have invented such a machine. That would great, wouldn’t it, as we’d have cars that ran on nothing and would not cost us any energy costs, such as fuel. Sadly that’s not to be.]

Pascal worked a long time in the privacy of his mind to come up with such a machine, indeed a perpetual wheel, but he couldn’t succeed. Instead, what he did accomplish was his version of the first roulette wheel, actually a probability machine, which we credit as the first one in human history. It became known as roulette, which means the little wheel. It might not have been a perpetual motion machine but it certainly has been in almost perpetual motion in the casinos around the world for centuries.

It is also believed that two aristocrats helped create the single-zero little wheel as a gambling device in order to make money from the game of roulette for King Charles III of Monaco in the mid-1800s. This allowed the “house” to extract quite a lot of money from the players, most of whom had no idea of what kind of house edge they were facing (2.7 percent) with that zero. King Charles was a happy monarch when this device was used against his own citizens!

OR WAY DEEP INTO THE PAST!

Let me take this history back even more in time. In the ancient world, definitely, Rome and even pre-Rome, perhaps Greek and pre-Greek, and in ancient Africa, in China, even among the American Indians, playing games or using “little wheels” as precognitive devices was something of a norm.

Here is an example: “Og, my heavenly king, let me spin my shield and where my symbol points is the land I shall ravage!”

“Come my comrades, let us amuse ourselves by sitting on our little, round shields and spinning ourselves ferociously. Whoever does not get sick wins the contest!”

[Please note: Perhaps the two greatest discoveries of human beings are fire and the wheel. People often talked and then wrote about the circle of life and many wrote about the cyclical nature of nature. The fiery sun was often worshipped as a god. Once we had the wheel, the world became shorter and distances shrunk quite a lot.]

THE WHEEL OF ALL WHEELS

The key to roulette is, of course, the very wheel itself; after all the game is actually the little wheel. In my over 30 years of casino play, I have noticed that not all that many players have much interest in the roulette wheel itself as in knowing its components, its structure, or how it works. Many players also have no idea of how the casino actually gets its edge at the game.

Most players will look at the ball spinning on the rotor and watch as the ball descends but how and why the wheel looks and acts as it does actually has little interest for them. For them, the ball spins and then drops into the pockets and finally settles into one and the losing bets are removed from the layout and the winning bets are paid off.

The process is then repeated over and over again – a perpetual game!

THE COMPOSITION OF A ROULETTE WHEEL 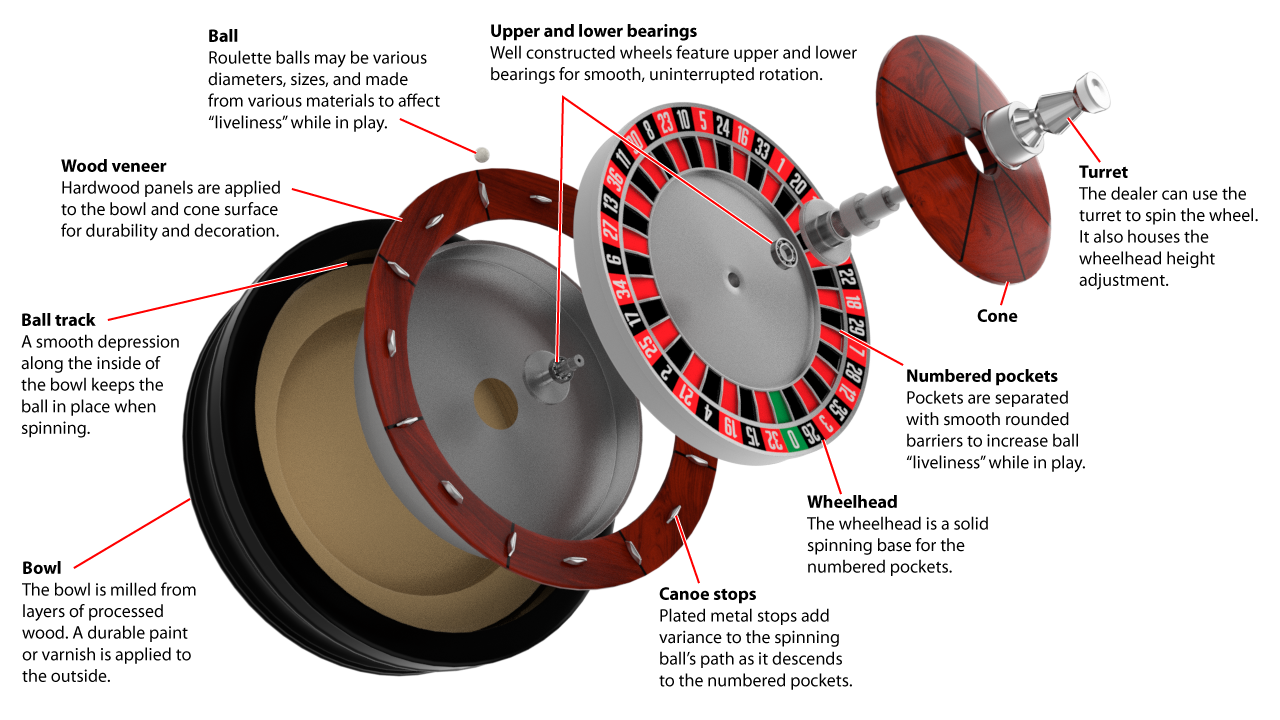 The roulette wheel, like ancient Rome’s government, is divided into three main parts:

When the ball spins on the bottom track, there are elements that interfere with its descent. These are variously called “bumpers” or “pins” or “diamonds” or “those darn things that screw up the landings.” The casino does not want a clean line of descent for the ball into the pockets. These interference elements are intended to make the game random because no one can really tell how a ball will deflect – that is, bounce – off these bumpers.

[Please Note: Modern casino games of roulette will often have two balls being used, a large one and a small one. These spin and land somewhat differently – making it almost impossible to figure how and in which pocket a ball will come to rest.]

The arrangement of the numbers on the wheel and how they are laid out on the betting layout are completely different. Take a look at the American double-zero wheel and you’ll see that the number “1” does not have number “2” next to it but instead number “2” is across the wheel. On the layout numbers “1” and “2” are next to each other (as they would be in counting).

The same is basically true of the European single-zero wheels.

Casinos do not want the betting layout to reflect the wheel’s positioning of the numbers because those players who wish to bet groups of numbers will not be able to do so. If you wish to bet numbers 1, 2 and 3 on the layout these numbers will have nothing to do with the wheel. Since most players have no idea of how the numbers are laid out on the wheel, they usually think betting 1, 2 and 3 means these numbers are near each other on the wheel when they are not.

This is an attempt to keep the betting methods random – and when a game is random it benefits land-based and also the online casino.

HOW THE CASINO GETS ITS EDGE

The casino does not pay off the bets based on their real value. The American double-zero wheels has 38 pockets. If players were to put $1 on each pocket, 37 pockets would lose and one would win. In a fair game the winner would receive $37 while the casino would win – you guessed it – $37 and the game would be an even contest between player and casino.

A HOST OF BETTING OPTIONS

Roulette has a multitude of betting options for the players. They can bet on inside numbers or combinations of these; they can bet on outside proposition bets of various kinds. Like craps strategies, players have plenty of choices to make. Some of the greatest gambling systems have been developed in order to beat the game.

Read other roulette articles on this site to learn about these

PROBLEMS WITH THE WHEELS

The betting layouts of roulette do not reflect the position of the actual numbers on either the European single-zero or the American double-zero wheel. This is to prevent players from betting groups of numbers that are physically adjacent on the wheel without actually looking at the wheel. You want five numbers that bump against each other on the wheel? Then you have to actually look at the wheel’s pockets, something most players won’t bother to do. Therefore betting 1, 2 and 3 will not see those numbers next to each other on the actual wheel although they are continuous on the layout.

Casinos know that some players – some very, very few players over the centuries – have worked on trying to beat the wheel in various ways and some have actually accomplished this. We call such players “advantage players.”

The good news is that over the centuries some (okay, some few, some very, very few) players have actually beaten the wheels. Unless the casino owners were ferociously checking their wheels with regularity, bad things (for the casino) or good things (for the players) could happen that alerted advantage-players that the time had come to jump into the game and reap some rewards.

That’s the good news. Here’s the bad news: Today’s wheels are almost perfectly balanced, the pockets are the same width, depth and thickness, and constant computer checking of these wheels prevents them from being anything less than almost perfectly working devices; perfect enough that as long as they are checked frequently no player can get an edge over them.

The little wheel has been a big favorite of casino players, past, present and (I presume) future.

[Please note: Are there players still out there in the world of the casinos who are beating roulette? Maybe, but my guess is that “probably not” is the right answer. It is hard to beat the advanced roulette wheels that exist today.]