Review of "A Favorable Side Bet in Nevada Baccarat," by Thorp and Walden

One of the great heroes of casino game analysis is Edward O. Thorp. He is best known for his seminal work, Beat the Dealer, originally published in 1962. Over 50 years later, it is still in the top five best-selling books on blackjack listed on Amazon. What is not so well-known is that Thorp also published a research article, with co-author William E. Walden, on beating two baccarat side bets. Their paper is A Favorable Side Bet in Nevada Baccarat (Journal of the American Statistical Association, Vol 61, No. 314, pp. 313-328). The full paper is available here in pdf format. The side bets that Thorp and Walden analyze in their paper are the propositions that either the Player hand or Banker hand will be either a natural 8 or natural 9. Any casual reader of this blog will immediately recognize the high degree of countability of these wagers. 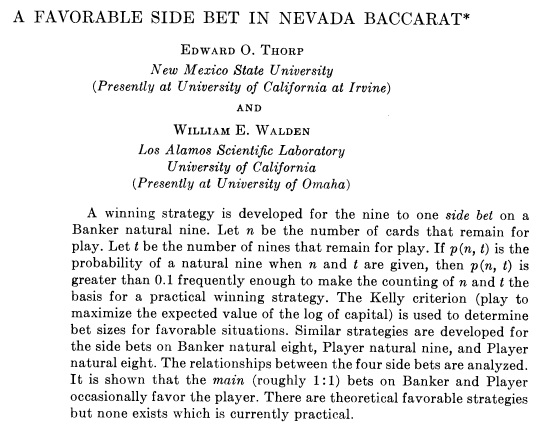 The following table gives the combinatorial analysis for the natural nine wager:

The following table gives the combinatorial analysis for the natural eight wager:

Let n be the number of cards in the shoe that thus far have not been used in play. Let t denote the number of these n cards with the value nine. Assume that the n – t other cards have been selected at random from the 384 non-nines which were originally in the complete eight decks.

From this statement and the previously quoted material, we know the following specifics about how Thorp and Walden approached counting these side bets:

This methodology should look very familiar to the reader. Using a framework that did not yet exist when this article was published in 1966, what Thorp and Walden were advocating was to use the following card counting systems to determine when to make a bet:

In considering the Player/Banker natural 9 side bets, Thorp and Walden concluded that (pages 318, 319):

Let N’ be the total number of cards which are not used during play, i.e., N’ is the sum of the numbers of unseen burned cards and the cards left in the shoe when the house decides to shuffle … We define N = N’ + 4 … It turns out that when N is fairly small, say 20 or 30, favorable side bets can be placed about 20 per cent of the time. The advantage on (mathematical expectation of) these side bets runs as high as 89 per cent when N is 20.

Roughly speaking, they are saying that if the cut card is placed at 20 cards, then the bet frequency is about 20% and the edges get as high as 89%.  They admit to using a “high speed computer,” but compared to the modern era, their final values are very rough.

Thorp and Walden spend a large portion of the paper investigating risk-adverse wagering on these side bets. That is, they assumed that they would be playing with a relatively small bankroll, and determined the appropriate Kelly bet sizes. The goal of this discussion was to show the correct wager sizes based on the current count and location through the shoe that gave the optimal method for doubling an initial bankroll.

In the modern era, any serious AP does not have bankroll concerns when counting side bets. The maximum wagers allowed on the side bets are simply too small compared to their bankrolls, so such analysis is not needed. If Thorp and Walden were members of modern-day AP teams, they may have omitted this entire discussion.

On page 326, Thorp and Walden stated,

A computer program was written to simulate the player of Nevada Baccarat. It verified that the system was valid, and that a casino try was justified … The system was successfully tested in the casinos. We studied the side bets in two particular casinos, which we refer to as casinos A and B. In casino A, the limits on the main bet were $5 to $2000. Bets on the naturals ranged from $5 to $200 on natural eight and an additional $5 to $200 on natural nine. The bet on either natural could be divided between The Player and The Banker in desired proportions. In casino B, the limits on the main bet were $20 to $2000 and bets on The Banker naturals only were allowed. The limits were $20 to $200 on each of The Banker naturals … An initial capital of $4000 was used at casino A and initial capital of $20,000 was used at casino B.

The fact that they claim to have been successful means that their total profit was at least $24,000 from playing against these two side bets, a huge sum back in 1966. By way of comparison, my starting salary as an assistant professor of Mathematics was $22,000 back in 1983.

At the time of publication of their research article, the concept of true count and counting tags were not yet developed. Today, the advantage that Thorp and Walden identified is trivial to achieve in practice. I have completed the research and will publish it in my next article. In this article, I will give the trigger true counts, bet frequency, average edge and win per 100 hands. These are the metrics that Thorp and Walden hinted at, but simply did not have the computational power to determine.

I am not aware of anyone who has followed through on Thorp’s article in this way, at least not publicly. What is clear is that Thorp and Walden were decades ahead of their time in their systematic targeting of a side bet. Not only did they do the research, they proved it at the tables.

Because of Thorp’s publication of “Beat the Dealer” in 1962, casinos panicked over blackjack card counters. The repercussions of Thorp’s original book on card counting have hardly waned in 50 years. The "no mid-shoe entry" rule and shallow cut card placement are its costly legacy. Meanwhile, Thorp quickly moved on. During the chaos that followed publication of his book, Thorp was busy researching how he could apply the same methodology to other games. The fact that Thorp published both his research on beating blackjack followed by his research on beating a baccarat side bet demonstrates his commitment to his academic foundation. It is not enough to simply discover what is true, publication of significant discoveries is obligatory. The academic mandate is that knowledge serves the greatest good  in the public domain.