Beating the Pair Square (Bet the Set) Blackjack Side Bet

Pair Square (PS) is a simple-minded blackjack side bet that pays if the player’s first two cards are a pair. There is a premium payout if the pair is suited. This bet is also known by the name “Bet the Set,” though I have never understood that name, as a “set” usually refers to Three-of-a-Kind in poker. This side bet has been around as long as the crows, but the question of vulnerability to advantage play has rarely been asked.  There are no references to PS  in Grojean’s “Beyond Counting,” and a Google search also comes up blank. However, a simple thought experiment shows this wager must be vulnerable.

The right way to estimate the maximum vulnerability of PS is to “integrate.” This gives the optimal earnings possible by using computer-perfect play. My approach will be considerably more simple-minded. A few weeks ago I thought of a possible way to beat the bet. I simulated it and got some results. The method worked.  Then I thought of a possibly stronger method. That worked too and it was better. I make no apologies for my lack of use of analytical power tools for this bet. Sometimes the bet just doesn’t deserve it.

Here is the combinatorial analysis: 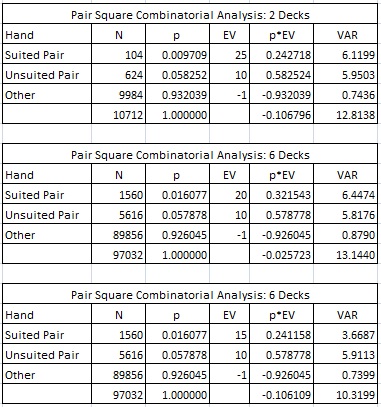 My first idea was to use the “Rank count.” To do this, I grouped the cards into two subsets of six cards each. One group consisted of the low cards {2, 3, 4, 5, 6, 7}, which are given the tag +1.  The other group consisted of the high cards {9, T, J, Q, K, A}, which are given the tag -1. If the true count is sufficiently positive, then a pair of high cards is more likely. If the true count is sufficiently negative, then a pair of low cards is more likely. For this reason, the “target true count” refers to a value that indicates both a positive and a negative target. 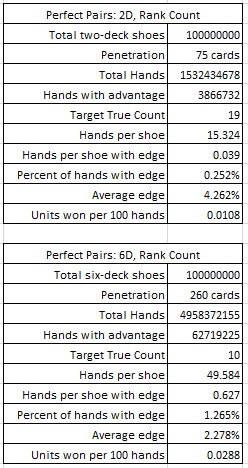 In the six-deck (20/10) version, an AP using the Rank count should make the wager whenever the count is either 10 or higher or -10 or lower. Then the AP will make a PS wager on about 1.27% of his hands, and when he does make the wager, his average edge will be about 2.28%. An AP who finds a game that allows a maximum wager of $100 on PS and is able to play heads-up, getting 200 rounds per hour, will earn about $5.76 per hour playing against PS. In the double-deck version, an AP will earn about $2.16 per hour in a heads-up game getting 200 rounds per hour. None of this is very impressive.

In search of a larger advantage, I created an extreme version of this count I call the “Frequency” count. Rather than grouping the cards into two sets, I computed a true count using a metric similar to that used for the 21+3 bet. Namely, keep track of the exact number of cards remaining from the most played rank and least played rank. Subtract the min from the max of these two values to get a “running count.” Then convert that running count to a true count.  If the true count is sufficiently large then the AP will have the edge.

This method is not human-feasible for blackjack (unless the human starts the shoe with 13 stacks of 24 chips in front of him, has very fast hands, and surveillance and the pit are busy eating doughnuts), but it is still worth checking its performance.

The following table summarizes the results from a simulation of one hundred million (100,000,000) six-deck shoes using the Frequency count: 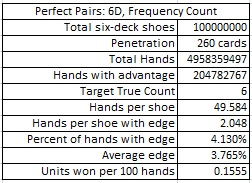 In the six-deck (20/10) version, an AP using the Frequency count should make the wager whenever the true count is 6 or higher. Then the AP will make a PS wager on about 4.13% of his hands, and when he does make the wager, his average edge will be about 3.77%. An AP who finds a game that allows a maximum wager of $100 on PS and is able to play heads-up, getting 200 rounds per hour, will earn about $31.10 per hour playing against PS. Not too bad, as long as the AP remembers to bring some doughnuts.

Here are my suggestions for protecting the Pair Square bet:

Side Bets
Blackjack Tips
About the Author
By
Eliot Jacobson Ph.D.