The “Easy Six” (ES) baccarat side bet pays 6-to-1 if either the Player hand or Banker hand wins on six points, or if a tie occurs on six points.  Otherwise, the ES wager loses.  Like the Dragon side bet in EZ Baccarat , the ES bet was designed to accompany a commission free baccarat variant. Also, like the Dragon side bet, ES has a card counting vulnerability. This post concerns card counting the ES wager.

The table below gives the combinatorial analysis for the ES wager:

It is intuitively clear that this wager is vulnerable to card counting. Simply put, an excess of the cards 7, 8 and 9 hurt the AP because they can immediately end the hand with a total above 6. Likewise, it is obvious that the card 6 is the most beneficial to the AP. The following table gives the effect of removal (EOR) for each card from an eight-deck baccarat shoe: 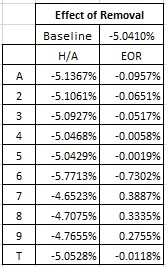 By looking at the EOR table, it is now clear that only the cards 6, 7, 8 and 9 need to be tracked. Every other card has a small EOR by comparison. By multiplying each entry in the EOR column by 411, we get the balanced optimal card counting “system 1.” By rounding the values in system 1 and adjusting to get a balanced count, we get the easy-to-use “system 2.” These card counting systems are given in the following table:

It is always easy to count cards in baccarat. The game moves slowly and the player can make use of a scorecard. Most of the time, however, the game does not provide a specific card counting vulnerability. But this particular wager is especially profitable to count.

One reason for its profitability is the depth the game is typically dealt.  It is not unusual to place the cut-card 14 cards from the end of an eight-deck shoe. The following is a standard method for setting the cut-card in baccarat and is the method that this analysis uses:

The following tables give the results from a simulation of one hundred million (100,000,000) shoes using each system: 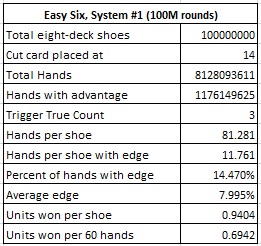 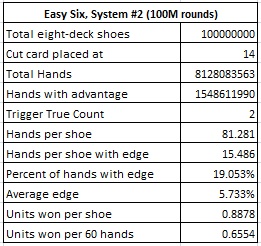 From these results it is clear that the easy-to-use system #2 performs exceptionally well. It returns over 94% of the value available using the optimal system #1.

The following table gives card counting statistics for ES for a variety of cut card depths up to two decks. By cutting off 26 cards, the AP’s profit is reduced to $54.32 per hour. At 52 cards (1 deck), the AP’s earning potential has dropped to $39.12 per hour. At 104 cards (2 decks), the AP is ahead about $22.26 per hour. These numbers show that there is still considerable opportunity for the AP at shallower cut-card placements. 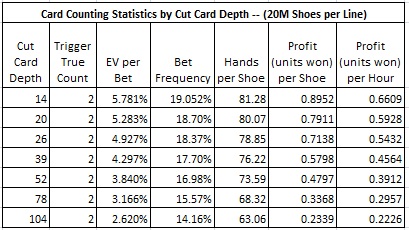 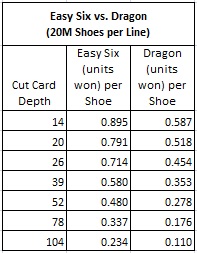 The Easy Six side bet is a significant advantage player opportunity. It is highly beatable and trivially easy to count. The edge is significantly higher than against DR7. Its variance is substantially less than that of DR7.  The bankroll requirements for the AP will be less, the time required to insure a profit will be less, and the profit potential will be more than against DR7.

The following are my suggestions for protecting ES: