Card Counting the In Between Blackjack Side Bet

I recently became aware of a blackjack side bet that is popular on the Gulf Coast and has a significant number of placements elsewhere:  the “In Between” bet (IB). It is very sexy to analyze games that have substantial advantage play issues. Exposing big threats elicits page views. I enjoy busting games. But this coverage can cloud the fact that there are some very robust and popular blackjack side bets on the market. Among the safest are 21+3, Bet the Set and Royal Match.  As I will show, IB is also in this category.

If the player’s two cards are identical in rank, then the hand wins if the dealer’s card is also of that rank (Three of a Kind). If the player’s two cards are consecutive (spread = 0), then the dealer’s card cannot be between them, so this hand automatically loses. Otherwise, if the spread is 1 or more, then the payout for a winning hand is based on the spread. The payouts for winning IB bets are as follows:

The following tables give the combinatorial analysis for the IB bet for 2 and 6 decks:

It is usually the case that card counting is much stronger with two decks than with six decks. In the case of IB, however, the difference between these situations is much less than usual. The reason for this anomaly is the low house edge in the six-deck version compared to the two-deck version. I will first consider the two-deck version.

The following table gives the effect of removal (EOR) for each card in the two-deck case. In the final column, I indicate a card counting system based on these EORs.  This count system fits the EORs extremely well. In fact, this counting system has a betting correlation of 0.999195, which is about as good as it gets by using an integer-based count: 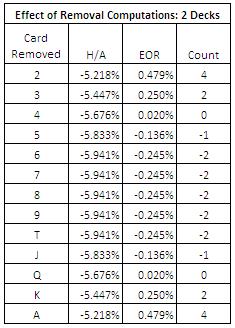 In other words, the count system has tags:

The intuition behind these tags is fairly strong – you may enjoy making your own arguments about why these tags pass the smell test.

To analyze this system, I ran one hundred million (100,000,000) two-deck shoes, with the cut card placed at 75 cards. The following table summarizes the results of this simulation:

These numbers indicate a low vulnerability to advantage play. If the AP uses the count system above on a fast heads-up double-deck game where he gets 200 rounds per hour, and the AP makes a $100 wager on IB whenever he has the edge, then the AP can earn about $21.60 per hour by card counting IB. This modest income stream comes with high volatility, making IB extremely uninviting to the AP.

I next consider advantage play against the six-deck version of IB. By computing the EORs in the six-deck case, it is clear that the same card counting system should be used. Just like the two-deck case, the betting correlation for this system is microscopically close to a perfect 1.0. 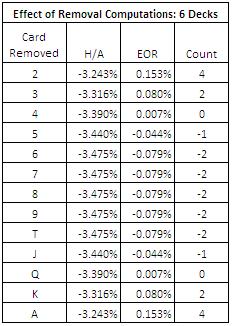 To analyze card counting IB in the six-deck version, I ran a simulation of one hundred million (100,000,000) six-deck shoes, with the cut card placed at 260 cards. The following table summarizes the results of this simulation:

Against a six-deck shoe, the AP will make about 75% of what he can earn from the two-deck version. If the AP uses the count system above on a fast heads-up six-deck game where he gets 200 rounds per hour, and the AP makes a $100 wager on IB whenever he has the edge, then the AP can earn about $15 per hour by card counting IB.

The following are my recommendations for protecting the In Between bet from advantage play: