A few days ago I was contacted by an advantage player who asked me to evaluate a new card counting system for Lucky Lucky (LL). I told him I would do the analysis only if he gave me permission to post the results here. He agreed. His e-mail to me was the following:

I asked for more of the story from this AP about what transpired between him and his nephew. It was such an odd thing for this AP to do. Who asks their nephew? The AP replied:

"My nephew is very sharp and is good at computers, so I asked him to devise one.  I asked him to compare his count to the ones on your site, but he told me he was very busy right now, and couldn't get to it soon."

I cover card counting LL in this blog post . Recall that this bet pays based on the value of the three-card hand consisting of the player’s first two cards and the dealer’s up-card. For convenience, here is a review of the most common pay tables and the house edge for each: 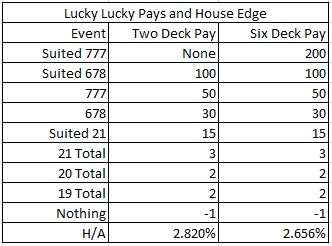 In the original post, I evaluated two systems. These were:

To this list, I added the system recommended by the nephew of the AP: 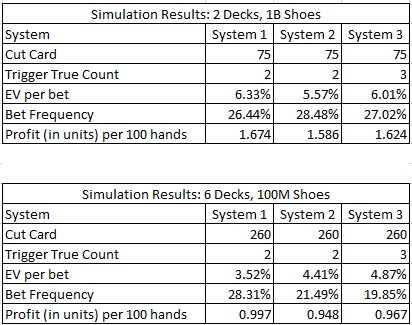 I note that the trigger true count for System 3 is +3 and not +2, as the nephew told his AP uncle.

I conclude by reviewing  my previous recommendations for protecting LL: