Sometimes a side bet comes along that dwarfs the others in terms of its card counting vulnerability. Such was the case with the Slingo Bonus Bet 21 side bet for blackjack. When I read about the Lucky Nines (LN) baccarat side bet on the Wizard of Vegas website, I immediately realized that it might be the most vulnerable baccarat side bet I've seen. In fact, it may be the most vulnerable side bet, period. This bet pays based on the total number of nines in the first four cards dealt to the Banker and Player hands, with bonuses for suited nines. Intuitively, a simple nines count should be more than adequate to crush this bet.

There is a catch, however. This side bet is not available for ordinary baccarat. Instead, LN is the proprietary property of the Slovenian company Interblock. It is currently only available on their electro-mechanical eight-deck baccarat, as demonstrated in this video:

In this magazine article in the February, 2012 issue of Casino Journal, Interblock stated that:

“Our blackjack and baccarat games now have a new featured side bet called Lucky Aces and Lucky Nines,” O’Brien said. “This additional side bet will increase the return for the operator of an additional hold anywhere from 4 percent to 6 percent without changing original game-play for blackjack or baccarat.”

There appears to be plenty of momentum to bring LN into production.

Let’s move onto the game itself. After making a wager on LN, the first four cards of the baccarat hand are dealt. By examining those four cards, the LN wager is resolved. The payouts are:

Here is the combinatorial analysis:

The balanced card counting system I tested that gave the best return has the following tags:

I tested a few systems that gave a slightly higher tag to the nine of diamonds. However, these systems did not improve on the return given by the simple system above.

The following table gives the results of using this count against LN. These results were obtained by a simulation of one hundred million (100,000,000) eight-deck shoes, with the cut card placed at the traditional location of 14 cards from the end. 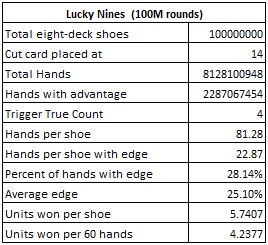 By comparison, playing the Dragon side bet in EZ Baccarat, the AP expects to earn about $60 per shoe. It follows that LN returns 857% more than the Dragon side bet. The closest baccarat side bet to LN in vulnerability is the Easy Six side bet that returns about $89 per shoe.  In this case, LN returns 545% more than Easy Six. These comparisons make it clear that LN is extraordinarily vulnerable to card counting.

The most vulnerable wager in the Slingo blackjack side bet is to bet on a dealer 21. That bet pays 19-to-1 if the dealer has blackjack. Out of all the various Slingo options, this is the wager of choice for a solo card counter. The profit per 100 hands for this Slingo AP is 4.94 units. By comparison, for the AP who is targeting LN, the profit per 100 hands is 7.06 units. Given the increased game speed for Interblock's baccarat due to the automated mechanism, the solo AP will get a much better result against LN than against Slingo.

One possible way to protect LN is to decrease the penetration through the shoe. The following table gives the card counting statistics for LN for cut card placements from 14 cards to 208 cards (4 decks) using the card counting system given above. Each line in this table was created by a simulation of twenty million (20,000,000) eight-deck shoes. 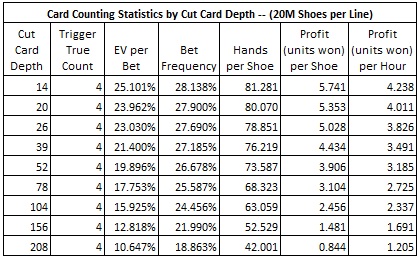 As this data shows, even if the cut card is placed half-way through the shoe, the AP is still earning more from LN than from playing against the Dragon side bet. There is simply no reasonable way to protect LN by decreasing the penetration.

After my challenging experience with DEQ and the EZ Baccarat Dragon Side Bet, I decided to be proactive and contact Interblock prior to releasing this post. My tone was a bit tough and arrogant with Interblock. I’ve got to learn how to communicate this type of information up the latter in a professional manner. However, surprisingly for me, they were completely open to what I had to say.

“We appreciate you bringing the vulnerability to our attention, and we are taking appropriate measures to address the situation.”

They told me that they are considering cutting the shoe in half or reducing the pay table.  I was also told that at present this wager is only available in one location. I advised them that they should cease from pursuing this wager altogether. What else could I say? But the momentum of investment and development sometimes overpowers common sense. The future will tell which way they go.

Here are my suggestions for protecting LN from advantage play: