Many of the side bets I analyze on this blog are small-time opportunities that are unlikely to get much action from card counting APs. That is not the case with UR Way Egalite (URE) baccarat side bet or its first cousin, Super Pay Egalite (SPE). The ordinary Tie bet allows the player to wager that the result of the hand will be a tie. The Tie bet is effectively unbeatable (see this post and this post). On the other hand, URE allows the player to wager on each specific tie, with separate odds offered for a tie on each final result. By using a custom designed counting system for each of the ten possible ties, URE can be crushed (see this post).  SPE is similar to URE in that it allows wagers on specific ties. In SPE the ties are grouped into five different subsets. Just like URE, dedicated counting systems can be developed for each of the five subsets of ties, allowing SPE to also be effectively crushed by advantage players.

In SPE, the player can make any one or more of the following five wagers:

The first wager (tie on 0) is also a wager in URE where it pays 150-to-1. In the case of URE, I gave a card counting system that returned 2.32 units per 100 hands for this wager. With an increased payout of 160-to-1 for the same wager in SPE, we can expect a much higher return for the counter. It goes from bad to worse: as I will show, the “tie on 0” in SPE is the single most vulnerable baccarat side bet currently available.

In this thread on Wizard of Vegas website, a claim was made that both URE and SPE are widespread in the UK. I can verify this first hand by observations made in casinos I visited during my travels to the London area in July and October of 2014. I was also able to track down SPE using a Google search, where I found it listed in this link for approved UK Casino Table Games. However, I was only able to track down one casino that is actively advertising SPE on its website. Without naming the casino, this is a screen capture of the casino’s website: 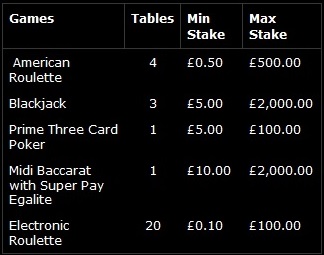 I am going to follow the usual methodology for analyzing SPE (see this post). To begin with, here is a summary of the combinatorics for each wager, giving the house edge and the standard deviation for each:

For the curious reader, the following table gives the full combinatorics for each wager: 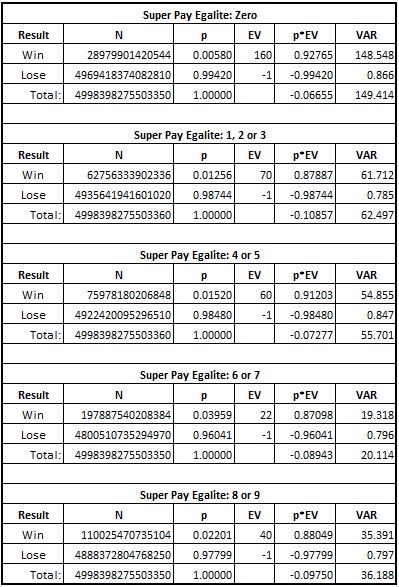 The next step is to determine the effect of removal (EOR) for each card for each wager. The following table gives these EOR’s: 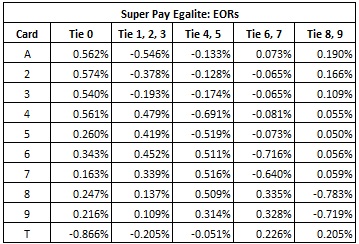 Based on these EOR’s, I came up with the following card counting systems for each wager: 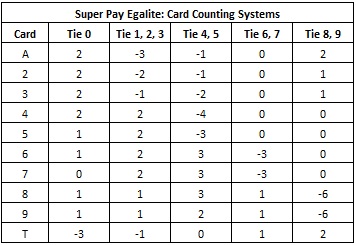 None of these systems is particularly easy to use if the counter had to keep track of the count in his head. However, in baccarat, where scorecards are allowed at the table, any one of these could be easily kept by the would-be counter.

I ran a simulation of one hundred million (100,000,000) baccarat shoes for each of these five SPE wagers, using the count systems above.  I assumed that the cut card was placed at 14 cards, and that the usual burn card and cut card rules were being used.

The following table summarizes the card counting statistics for each SPE wager:

The following table summarizes the win possible from a team approach to beating SPE:

A team of five counters, working together, can earn $3,979 per 100 hands playing against the SPE wager.

On the Wizard of Vegas thread about SPE, the original poster stated:

"There are no burn cards, the cut card is usually placed 12 cards in. So for a six deck game approx 300 cards will be dealt ... Incidentally the £25 limit is applicable to where I play, in other cities such as London you can bet much much higher on this side bet, not bad for 160-1 odds."

I ran a simulation of one hundred million (100,000,000) shoes for the "tie on 0" wager in the situation described above. I assumed a six-deck shoe, with no burn cards, and the possibility of dealing down to the last card in the shoe.  Here are the results:

This simulation shows that the six-deck game with the liberal cut card and burn card rules is significantly more vulnerable than the eight-deck version.

The only possible game protection is to offer SPE in either an electronic version with a continuously shuffled shoe, or to deal baccarat from a continuous shuffle machine.  If your casino currently offers either URE or SPE in a live game dealt from a shoe, you should immediately take a closer look.