One of my first outings as a novice blackjack card counter was to Laughlin, Nevada, in the Spring of 1997. I recall seeing a wager on a six-deck shoe game called the Super Sevens (SUP7) side bet. It paid whenever the first card dealt was a seven, with higher payouts for two or three sevens and suited hands. This was my first experience with advantage play against a side bet. I did some scratch mathematics and determined that if twenty non-7’s came out at the start of the shoe, then I had the edge. That “special” shoe finally arrived and I started making SUP7 wagers. I recall a hand when sevens were dealt around the table, missing me entirely.

I haven’t seen SUP7 in a casino in about 15 years. I thought it was extinct. But recently it has been popping up again. A Google search shows three U.S. land-based casinos that offer the SUP7 wager.  One casino web page advertises: “A brand new side bet for Blackjack lovers … look for specially marked tables.” Online casinos have also started to resurrect this dinosaur.

The following table gives the combinatorial analysis for SUP7:

It should be intuitively obvious to the casual reader of this blog that SUP7 can be crushed by card counting. The problem with this gold-mine is that the only wager the player is allowed to make is $1 (one dollar).  No matter the edge the AP can get, with this austere limitation on wager size, SUP7 will never be a viable advantage play. From the casino side, the income per $1 wager is only about 11 cents. Given the time/motion tradeoff, the profitability of SUP7 for the casino is surely in doubt. I expect that if SUP7 continues its comeback, the maximum wager will increase.

The following combinatorial analysis shows the edge when twenty non-7s are removed from the start of a fresh six-deck shoe:

The probability that the first twenty cards in a fresh shoe are non-7s is 20.72%. It follows that about one-in-five shoes will give the AP an edge after about the second or third round. That "rare shoe" back in Laughlin in 1997 was not so rare after all. (Note. If the first nineteen cards in a fresh shoe are non-7s, then the player has an edge of 0.163% over the house. This situation occurs on 22.57% of fresh six-deck shoes. At the eighteen card point, the house still has the edge.)

I am going to forgo the usual EOR analysis for determining the card counting tags. The obvious card counting system must be the right system:

The previous combinatorial analysis corresponds to a true count of just under +4 using this card counting system.

As expected, this simulation gave a target true count of +4.

The win-rate of 8.550 units per 100 hands is the largest win-rate of any side bet I have analyzed that doesn’t require team play. Only team play against the Slingo Bonus Bet blackjack side bet gives a higher overall return.  But for the fact that the maximum wager is $1, SUP7 would surely be a big target.

To underscore the extraordinary vulnerability of SUP7 to card counting, I created a graph that plots the edge as a function of the true count.  The graph below was produced by a simulation of one billion (1,000,000,000) six-deck shoes, using the count system given above. The horizontal axis corresponds to positive true counts. The vertical axis gives the approximate house edge at the given true count. 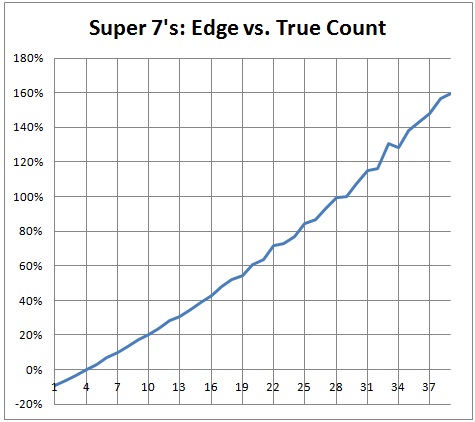 For completeness, here is the combinatorial analysis and card counting data for SUP7 when dealt from an eight-deck shoe.

The following are my recommendations for protecting the SUP7 blackjack side bet from advantage play: