In this article, I discussed the “Rabbit” baccarat side bet. It is one of three distinct baccarat side bets that are collected together into a game called ZooBac. This article discusses another one of these baccarat side bets, the “Tiger.” The third wager in the zoo is the “Monkey” side bet. The Monkey pays 150-to-1 for a zero-zero Player/Banker tie. I already analyzed the Monkey in this post, where it is shown that it can be crushed as one part of the UR-Way Egalite conglomerate (win-rate = 2.32 units per 100 hands).

Before I analyze the Tiger, I am going to ramble on about pretty much nothing meaningful. I am not sure that a “zoo” is the correct container for these wagers. These animals represent three of the twelve signs in the Chinese zodiac. The others are Rat, Ox, Dragon, Snake, Horse, Sheep, Rooster, Dog and Pig. Given that we are entering the “Year of the Horse” on January 31, it may be time for a “Horse” baccarat side bet. At any rate, there is not a zoo on the planet that has a rat, rooster, dog and rabbit in it; though I had all four on my farm when I lived in Ohio (the rats weren’t by choice). We also had a horse, coincidentally, named "Copper."  I suggest that instead of ZooBac, the game could have been called ZodiacBac, or just AcBac for short. If it was named AkAkBac, then it would have advertisement at no extra cost (click here).

The Tiger baccarat side bet pays whenever the Banker wins with a three-card total of 8. Here are the payouts:

Here is the full combinatorial analysis:

Because a third card must be dealt in order for the player to win the Tiger bet, it follows that as 9’s are dealt from the shoe, the edge moves towards the player side. The 8 is a more subtle card. It helps when they are removed from the shoe, because three-card hands are more likely. But, it also helps if 8’s are in the shoe, because the most common total for the first two cards is 0+0 = 0 and 0+0+8 = 8. An Ace can never generate a total of 8 if drawn as a third card so the player should be happy to have those dealt from the shoe. Likewise, a deuce only totals 8 when drawn to a six, which is very rare, so the player is happy to see deuces leave the shoe.

This is all a very complicated way of saying that heuristics are not as strong for the Tiger as they are for the Bunny (I mean Rabbit). Maybe I should just let the numbers speak for themselves. The following table gives the EORs for the Tiger side bet, together with a card counting system based on these EORs: 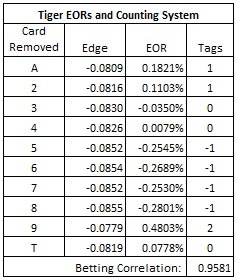 Note that the BC is a relatively poor 0.958, which underscores the intuitive deficiency of key cards. To get a better card counting system would require a challenging multi-level count. The return from this paper tiger does not justify the effort. Here are the results of a simulation of two hundred million (200,000,000) eight-deck shoes using the system above, with the normal cut card placement at 14 cards and the normal burn card rules: 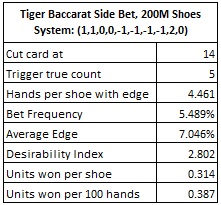 At 0.387 units per 100 hands and with a DI of 2.802, the Tiger bet is more of a kitten. However, a team approach is what beats the Zoo. With a two-member team, the Rabbit and Tiger together will earn 0.797 units per 100 hands for each team member. Once the Monkey gets into the cage along with the other two, someone is going to get eaten.