Yet another side bet that can be counted in California card rooms:  the Total Shot Bonus (TSB). Formally, this side bet is for the baccarat variant known as Supreme Baccarat. This variant is simply the commission free version where a Banker winning total of 6 pays 1-to-2.  Like ordinary baccarat, the main game is not vulnerable to card counting. However, TSB suffers from the same flaw as many baccarat side bets that have come before: it is based on final hand totals of 8 and 9. For example, the Lucky Nines side bet  can be crushed; but Lucky Nines only appeared at one location, one time, and can no longer be found. On the other hand, from what I've been told, TSB is quite common in California card rooms.

TSB pays based on the total of the Banker hand and Player hand after the baccarat hand is completed. This sum is not reduced modulo 10; it is just the ordinary total. The Banker + Player total can be any value from 0 to 18. The pay table for TSB is easy enough:

Here is the combinatorial analysis for the eight-deck version:

The following table gives card counting statistics for TSB for baccarat dealt from an eight-deck shoe, with the cut-card placed at 14 cards, and the usual rule for burning initial cards. These results were obtained by a simulation of one hundred million (100,000,000) eight-deck shoes: 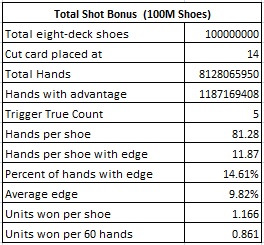 TSB is has a high vulnerability to card counting. The win-rate is not as strong as with some other nine-based bets because third-card draws are involved.  An AP who makes a $100 wager on TSB whenever the count is +5 or higher will wager on about 14.6% of his hands, and will have an average edge over the house of about 9.8%. This AP will earn about $143 per 100 rounds. If the game is played with a player-collection, then this win-rate may not be enough to attract counters. However, if the game is entirely banked by the corporation, then this win-rate is certainly sufficient; it is about 40% higher than the win-rate for the EZ Baccarat Dragon/Panda combination.

The standard game protection procedure for games that can be card counted is to increase the depth of placement of the cut-card. This procedure works quite well to protect TSB. The following table gives card counting statistics for various cut-card depths from 14 cards to one-half shoe (4 decks). Cutting off one full deck (52 cards) instead of 14 cards reduces the AP’s edge by nearly half. 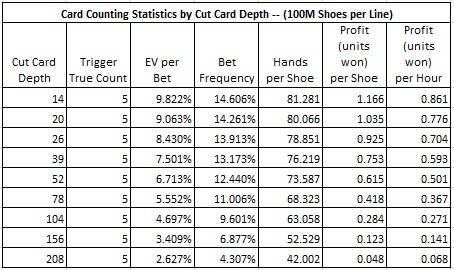 Game protection for TSB is similar to that for other games with card counting vulnerabilities. The following are my suggestions for protecting TSB: