Card Counting the UR Way Egalite Baccarat Side Bet

The Tie bet is among the safest side bets in baccarat. Various approaches have been tried in developing a strategy to defeat the tie (see this post and this post). However, even using computer perfect play and a cut card placed at 7 cards, an AP who places a $100 wager on the Tie bet whenever he has the edge will only earn about $33 per shoe (0.33 units per shoe). It is unlikely any serious AP would try to defeat the Tie bet. Such is not the case with the Tie bet variant “UR Way Egalite” (UWE). As I will show, UWE is among the most beatable games of any I have analyzed on this blog.

What distinguishes UWE is that the player can wager on each separate tie, with separate odds for each. That is, UWE is ten separate wagers, with each of the ties on 0, 1, 2, 3, 4, 5, 6, 7, 8 and 9 having a different payout. If the result of a hand is anything other than a tie, then all UWE wagers lose. The player can play none, some or all of these numbers on any given hand.

The ten separate UWE tie bets are as follows:

The following table gives the house edge and standard deviation for each of these wagers in the case when UWE is offered in an eight-deck shoe: 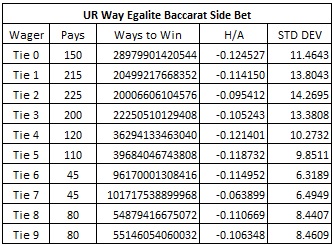 If a player makes equal wagers on each of these 10 bets, then he is essentially playing a “Tie bet” with a wager of 10 units. A simple computation shows that this modified “Tie bet” pays at odds of about 8.83-to-1, making it much better for the player, on average than the ordinary tie bet that pays 8-to-1. This shift towards the player can also be seen by observing that the 8-to-1 Tie bet has a house edge of 14.360%, whereas the wagers listed above have smaller house edges, ranging from 6.49% to 14.27%.

The following table gives the EORs for each of the ten UWE tie bets, when UWE is offered from an eight deck shoe: 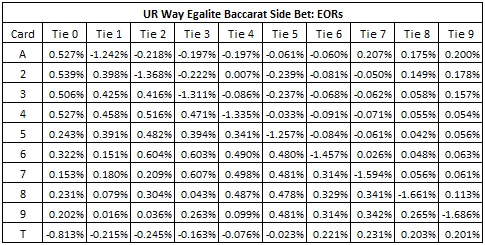 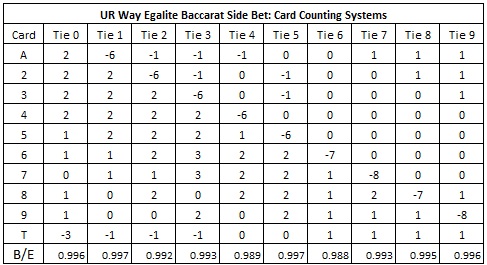 To test these card counting systems, I ran a simulation for each. The game I simulated has the standard cut card rules:

The following tables give the results from ten different simulations, each simulation consisting of two hundred million (200,000,000) shoes. Each simulation gives the results of using specified card counting system against its respective tie bet (click on the image to make it larger):

The strongest single opportunity arises by targeting the “Tie 7” UWE side bet. This wager produces an average profit of 2.16 units per shoe or 2.65 units per 100 hands. The AP will have an edge on 22.4% of the hands, and when he makes the “Tie 7” wager, his average edge will be 11.8% over the house.  By comparison, the Dragon 7 side bet in EZ Baccarat returns about 0.597 units per shoe. That is, the “Tie 7” side bet from UWE is about four times as profitable for the AP as the Dragon 7 side bet in EZ Baccarat.

However, the combination of these opportunities together gives a unique opportunity. A team can be assembled, each counting one of these ten wagers. Whenever a team member hits his target count to make his particular UWE tie bet, the other team members follow suit, making the tie bet on the same number.

For example, a team of three APs might choose to target the three most profitable UWE tie bets. By considering the table above, these are “Tie 0”, “Tie 2” and “Tie 7.” Each AP will use the particular card counting system given above to count his tie bet. Although these card counting systems may appear to be tough to use, in baccarat using a score card, it would be a triviality. The AP could write his system and cards played on his score card to help keep his count.

The following table gives the units won per shoe for each team member and overall using this team approach:

In the literature for this wager, I found the following statement:

If this wager is made available, then the second cutting card must be inserted 14 cards from the other cutting card. If the cutting card is displayed after a completed coup, then the Dealer must announce that was the last coup of the shoe and the cards reshuffled.

The following tables give the results from ten different simulations, each simulation consisting of one hundred million (100,000,000) shoes with the cut card placed at 28 cards. Each simulation gives the results of using specified card counting system against its respective tie bet:

Once again, a team of three APs will count “Tie 0”, “Tie 2” and “Tie 7.” Each AP will use the particular card counting system to count his tie bet. The following table gives the units won per shoe for each team member and overall using this team approach:

UWE has an extreme vulnerability to a card counting methodology of advantage play. A solo counter can earn at a rate of about 4-times the earning potential of the Dragon 7. A team of three AP’s can earn $1,443 per shoe at the recommended cut card depth of 28 cards. In an unprotected game, a team of ten AP’s can quickly empty the rack. I recommend that any casino that offers UWE be attuned to its extreme vulnerability to card counting. Especially, watch out for team play.

Card Counting
Side Bets
Baccarat Tips
About the Author
By
Eliot Jacobson Ph.D.