Some blackjack side bets are so obviously countable that extraordinary measures must be taken to protect games where they are offered. Ordinary blackjack Insurance is such a wager (see this post). Insurance is simply a side bet paying 2-to-1 that the dealer’s down card is ten-valued. A simple unbalanced count can be used to crush insurance; hence two artificial limitations are placed. First, to make an Insurance bet the dealer must have an Ace as his up-card. Second, the player’s wager is limited to ½ his original wager. By restricting both the frequency and size of the wager, the house protects itself from advantage play.

The only purpose in restricting the frequency and size of Insurance wagers is game protection. Failure to understand this principle has led several game designers to invent a variety of blackjack side bets allowing a player to wager that “the next card is ten-valued,” paying 2-to-1. Wild Aces (WA) is a wager of exactly this type. In its simplest description, WA is insurance for the player’s hand, with the important difference that the player’s wager on WA can be up to the size of his original wager. Here are the rules for WA, from a rack sheet I picked up recently in a downtown Las Vegas casino: 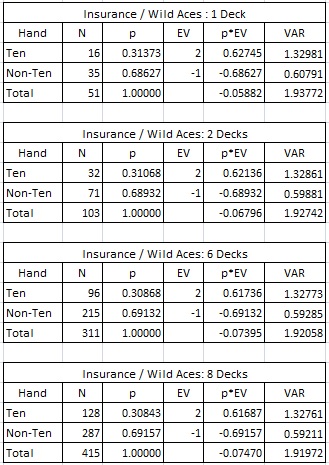 There is a well-known unbalanced card counting system (called the “Insurance count”) that can be used to simultaneously count both the Insurance wager and WA. This system has perfect betting correlation: the player has the edge exactly when the count equals or exceeds its trigger value. The Insurance count is described as follows:

The player starts with a running count (RC) of 0. If he is playing a game with D decks, then the player has the edge if and only if RC ≥ 4*D + 1. In other words, when using the Insurance count, the player should play Insurance and WA at the following trigger running counts:

To compute the edge obtainable by co-card counting Insurance and WA, I ran four simulations. These simulations were for 1-deck, 2-deck, 6-deck and 8-deck games. In single-deck blackjack, I assumed the player played head’s-up against the dealer and that five rounds were dealt between shuffles. For the multi-deck games I assumed standard placements for the cut card. The following table summarizes the results of my simulations:

In co-counting both Insurance and WA, note that the player is allowed to wager up to half of his original wager on Insurance and up to his full wager on WA. With these restrictions on wager size, the following table shows the gain possible from using the insurance count to co-count these two wagers:

At the casino where I observed WA, it had a maximum table limit set at $100 per hand. Consider a player who is flat betting $100 on a two-deck game with the cut card placed at 75 cards. Assume the game has the standard downtown double-deck blackjack rules (H17, DOA, NDAS) with house edge 0.537%. In 100 hands, this player’s expected loss is $53.70. As the table above shows, he gains back $27.40 from co-counting Insurance and WA, for a net expected player loss of $26.30 per 100 hands. In other words, perfect Insurance / WA play reduces the house edge by over 51% from its original value.

Of course, the situation is quite different for an advantage player who is intent on beating the game outright. Insurance is the number one strategic variation the counter makes to affect the house edge. With the addition of WA, the counter effectively gets a second chance at taking insurance in advantageous situations.

I am not implying that WA is a big play for the AP. It is not. It is unlikely that an AP will go out of his way to play against this side bet, though he will certainly play WA if he is otherwise card counting at a casino that offers it. The important lesson here is that all side bets based on a specific card having a specific value are highly vulnerable. WA does not escape this burden.

Card Counting
About the Author
By
Eliot Jacobson Ph.D.