The Dragon 7 and the "Naturals" Count

All that glitters is gold
Led Zeppelin, "Stairway to Heaven"

I was secret shopping at a casino last week, and I had to spend five hours on the floor just observing. Out of boredom I decided to back count the Dragon 7 side bet at an EZ Baccarat table (see this article). After the first few rounds, the Dragon count got quite high. Not surprisingly, there were also a lot of natural 8's and 9's during the first few rounds. I left the table and wandered the floor for a few minutes. When I returned I saw the scoreboard filled with naturals. It then struck me that those naturals probably involved 8s and 9s being dealt, so the count was probably still quite high. This realization lead to an intriguing possibility: if there is an abundance of naturals posted on the scoreboard, does that mean the player might have the edge over the Dragon 7 bet?

If the answer was "yes" then the Dragon 7 was in serious trouble. Instead of back counting individual shoes, counters had a new and much stronger strategy. They could wander the floor looking for scoreboards rich in naturals and efficiently make Dragon 7 bets on those tables. APs would no longer have to endure the pain of counting each tortuous shoe. In casinos with dozens of Dragon 7 tables (there are a few), the AP could wander the casino floor slaying the Dragon 7 in all its lairs.  I considered that this strategy might put an end to the Dragon 7 side bet as we know it.

I decided to look at the problem in terms of a "natural true count." To do this, I simply took the current number of naturals on the scoreboard and divided by the number of decks remaining in the shoe. Here are some examples:

First as a reminder, here is the combinatorial analysis for the Dragon 7 side bet for EZ Baccarat:

Back to the naturals true count. I wrote a computer program to keep track of the player edge vs. naturals true count. It took a huge number of shoes for this program to produce reliable results, primarily because of the stratospheric values of the true count towards the end of the shoe. In order to tame things down a bit, I grouped the true counts by an increment of 5. For example, any true count in the range 170-to-174 was considered to be a true count of 170. I also simulated five billion (5,000,000,000) shoes rather than my usual one billion.

The following graph plots the house edge vs. the naturals true count in an eight-deck show with the cut card placed at 14 cards: 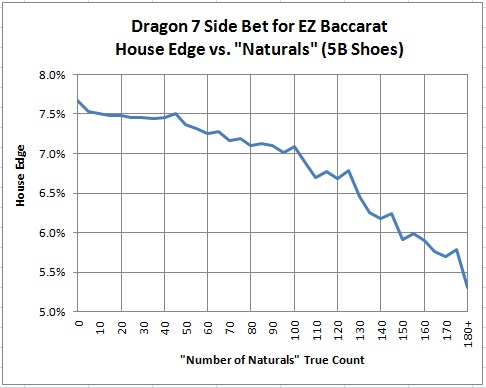 For true counts up to about 40, the edge stayed consistently around 7.5%, which is approximately the house edge. This corresponds to the first seven decks of an eight-deck shoe. In the last deck of the shoe as the true counts grow quite large, the results showed the trend I thought I would see. However, the house edge never got below 5%.

This graph shows that the "naturals true count" is not a method to beat the Dragon 7 side bet for EZ Baccarat.

After this failure, I considered that maybe a more sophisticated methodology could work. That methodology would look something like this:

Once again, after several massive simulations, this method showed no opportunities for consistently positive EV against the Dragon 7 side bet.

In conclusion, I found it very interesting to investigate the possibility of beating the Dragon 7 by counting the number of naturals on the scoreboard. But ultimately, this method failed. In other words,

All that glisters is not gold
William Shakespeare, "The Merchant of Venice"